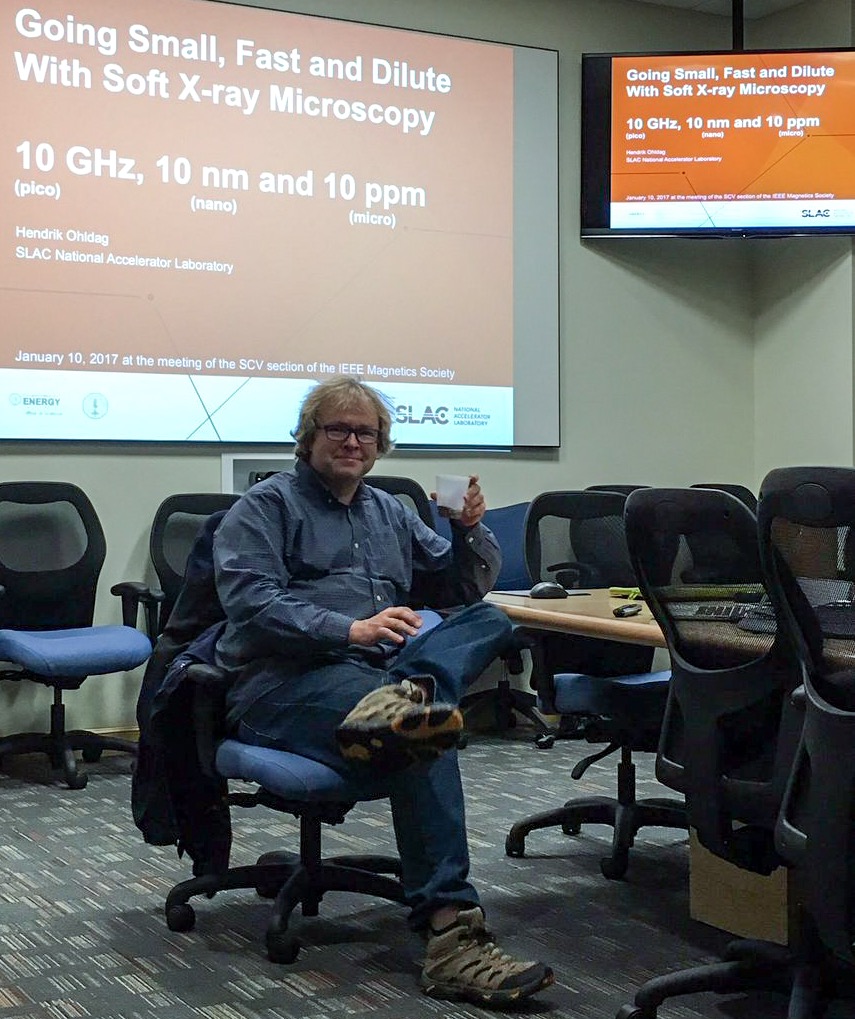 We welcome Hendrik Ohldag, IEEE Magnetics Society Distinguished Lecturer for 2017, who will visit our Institute on June 27 (at 10 am) and will deliver the talk on "Ultrafast and Very Small: Discover Nanoscale Magnetism With Picosecond Time Resolution Using X-Rays".

The goal of this talk is to present an introduction to the field and explain the capabilities of synchrotron based X-ray microscopy, which is becoming a tool available at every synchrotron, to a diverse audience. The general introduction will be followed by a set of examples, depending on the audience, that may include properties of magnetic materials in rocks and meteorites, magnetic inclusions in magnetic oxides, interfacial magnetism in magnetic multilayers, and dynamics of nanostructured devices due to field and current pulses and microwave excitations.

Pep Fontcuberta, from the MULFOX group at ICMAB, was IEEE Magnetics Society Distinguished Lecturer for 2016, and delivered more than 60 talks during the year 2016. One of the objectives of the IEEE Magnetics Distinguished Lecturer program is to disseminate progress and advances in the field of magnetism and to involve the international scientific community in its broadest sense.

Hendrik Ohldag, now Researcher at SLAC National Accelerator Laboratory, Menlo Park, California, USA, received the Ph.D. in experimental physics from the Universität Düsseldorf, Germany, in 2002. He joined the Stanford Synchrotron Radiation Light Source (SSRL) in 1999 as a research assistant as part of his Ph.D. research. After a postdoctoral fellowship at SSRL he became a permanent member of the research staff in 2005. Between 1999 and 2002 he was a visiting researcher at the Advanced Light Source (ALS) at Berkeley National Laboratory. Since 2014 he is a visiting researcher at New York University.

Dr. Ohldag was awarded the David. A Shirley Award at the ALS in 2006 for “outstanding contribution in using photoemission electron microscopy for the study of magnetic materials.” He is a member of the IEEE Magnetics Society and the chair of the Magnetic Interfaces and Nanoscale Device Division of the American Vacuum Society. He has authored or co-authored over 50 peer-reviewed papers and book chapters which have been cited over 2500 times. He has participated in the organization of 25 international conferences and workshops. His research focuses on the use of X-ray microscopy to study the dynamic and static properties of complex magnetic materials.

Abstract of the talk:

Today’s magnetic device technology is based on complex magnetic alloys or multilayers that are patterned at the nanoscale and operate at gigahertz frequencies. To better understand the behavior of such devices one needs an experimental approach that is capable of detecting magnetization with nanometer and picosecond sensitivity. In addition, since devices contain different magnetic elements, a technique is needed that provides element-specific information about not only ferromagnetic but antiferromagnetic materials as well. Synchrotron based X-ray microscopy provides exactly these capabilities because a synchrotron produces tunable and fully polarized X-rays with energies between several tens of electron volts up to tens of kiloelectron volts. The interaction of tunable X-rays with matter is element-specific, allowing us to separately address different elements in a device.

The polarization dependence or dichroism of the X-ray interaction provides a path to measure a ferromagnetic moment and its orientation or determine the orientation of the spin axis in an antiferromagnet. The wavelength of X-rays is on the order of nanometers, which enables microscopy with nanometer spatial resolution. And finally, a synchrotron is a pulsed X-ray source, with a pulse length of tens of picoseconds, which enables us to study magnetization dynamics with a time resolution given by the X-ray pulse length in a pump-probe fashion.