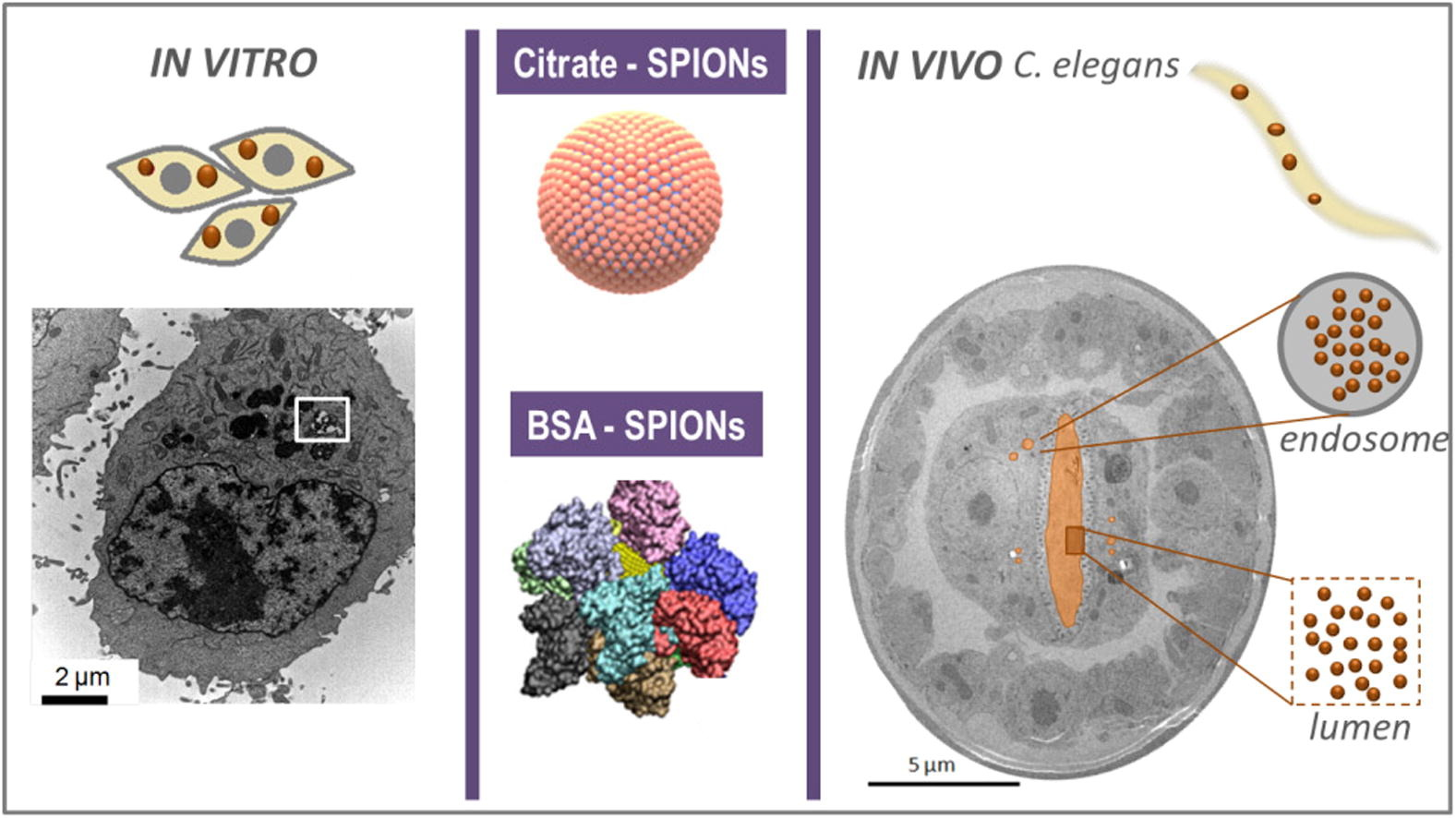 Bio-identity and fate of albumin-coated SPIONs evaluated in cells and by the C. elegans model

Bio-identity and fate of albumin-coated SPIONs evaluated in cells and by the C. elegans model

Nanoparticles which surface adsorb proteins in an uncontrolled and non-reproducible manner will have limited uses as nanomedicinal products. A promising approach to avoid nanoparticle non-specific interactions with proteins is to design bio-hybrids by purposely pre-forming a protein corona around the inorganic cores. Here, we investigate, in vitroand in vivo, the newly acquired bio-identity of superparamagnetic iron oxide nanoparticles (SPIONs) upon their functionalization with a pre-formed and well-defined bovine serum albumin (BSA) corona. Cellular uptake, intracellular particle distribution and cytotoxicity were studied in two cell lines: adherent and non-adherent cells. BSA decreases nanoparticle internalization in both cell lines and protects the iron core once they have been internalized. The physiological response to the nanoparticles is then in vivo evaluated by oral administration to Caenorhabditis elegans, which was selected as a model of a functional intestinal barrier. Nanoparticle biodistribution, at single particle resolution, is studied by transmission electron microscopy. The analysis reveals that the acidic intestinal environment partially digests uncoated SPIONs but does not affect BSA-coated ones. It also discloses that some particles could enter the nematode’s enterocytes, likely by endocytosis which is a different pathway than the one described for the worm nutrients.

Unravelling meaningful relationships between the physiological impact of engineered nanoparticles and their synthetic and biological identity is of vital importance when considering nanoparticles biomedical uses and when establishing their nanotoxicological profile. This study contributes to better comprehend the inorganic nanoparticles’ behavior in real biological milieus. We synthesized a controlled pre-formed BSA protein corona on SPIONs to lower unspecific cell uptake and decrease nanoparticle fouling with other proteins. Such findings may be of relevance considering clinical translation and regulatory issues of inorganic nanoparticles. Moreover, we have advanced in the validation of C. elegans as a simple animal model for assessing biological responses of engineering nanomaterials. The physiological response of BSA coated SPIONs was evaluated in vivo after their oral administration to C. elegans. Analyzing ultra-thin cross-sections of the worms by TEM with single-particle precision, we could track NP biodistribution along the digestive tract and determine unambiguously their translocation through biological barriers and cell membranes.