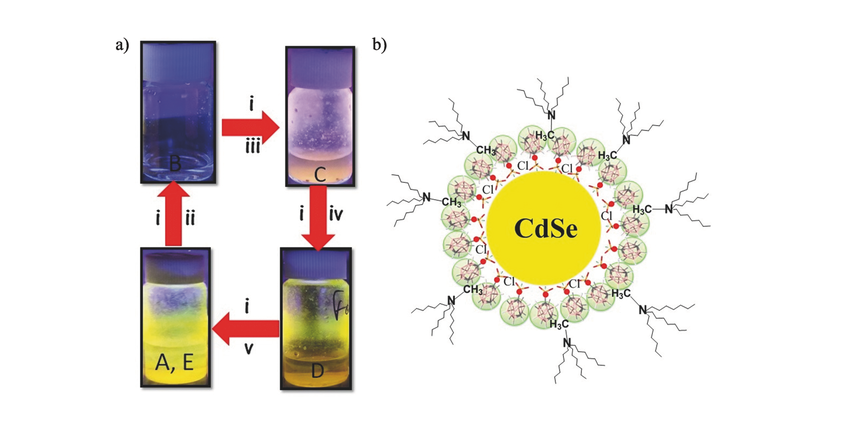 Closely packed hollow spheres connected through pillars to a CdSe quantum dot (QD) core produce channels through which ions navigate. This particular structure is well represented by [CdSe@CarbOPH(O)]@Cl/[N(Caprylyl)3Me1] indicating that in the channels between the canopy made by the carboranyl spheres (carboranylphosphinate, CarbOPH(O)) and the CdSe core exist chloride anions. Due to the close packing, the spheres produce openings. These are converted into gates because [N(Caprylyl)3Me1] acts as a plug. The [CdSe@CarbOPH(O)]@Cl/assembly is negatively charged because the Cd positive charges are outnumbered by the negative charges due to the Se, the phosphinic acid and, very importantly, the trapped chloride anions, and this negative load is compensated by the cationic surfactant. Here, it is shown that this synergism produces an unprecedented phenomenon, namely, kinetic fluorescence switching. It is observed that the material shines brightly then loses its brightness and, upon the application of kinetic energy, shines back to the maximum power. This process continues for an extended period of time, up to half a year, at least. This new type of architecture in QDs is named as core–canopy QDs. In this case, this study demonstrates one property, the kinetic fluorescence switching, as a consequence of the trapping of Cl− in the QDs channels, but other properties can be envisaged with the judicious choice of the anions or even the pillar connecting the hollow sphere with the ground.