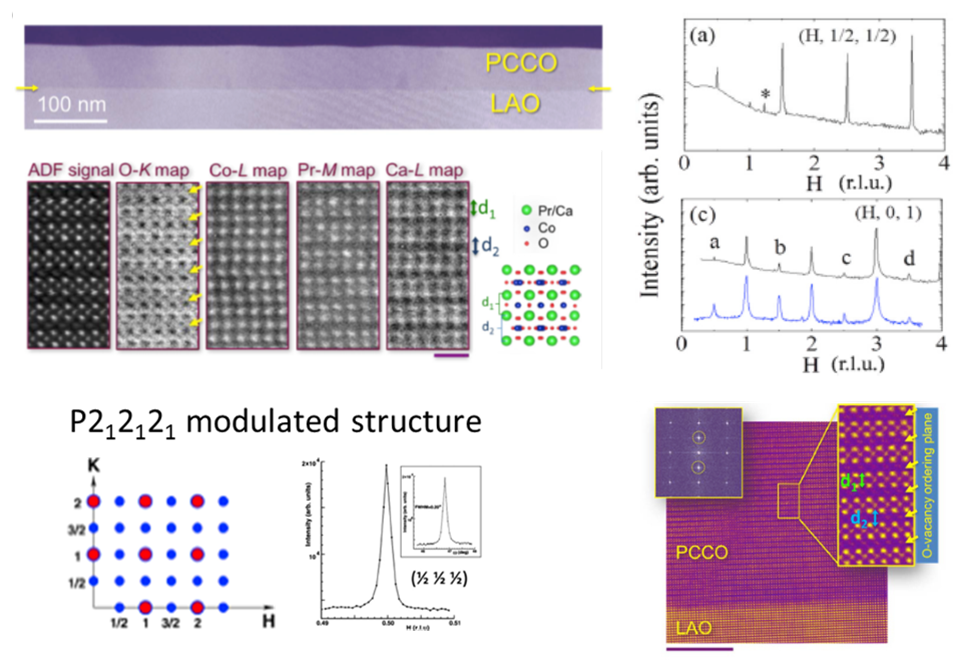 The Pr-based cobaltate Pr0.5Ca0.5CoO3 (PCCO) presents in bulk form a singular simultaneous valence and spin-state transition that turns the metallic state into insulator, and displays a large and ultrafast photoresponse in the insulating phase. Epitaxial thin films of PCCO have been grown by deposition on LaAlO3(001) (LAO) substrate, chosen to minimize the mismatch with the film. The films grow epitaxially with two times the substrate periodicity (2a0×2a0×2a0) and the long perovskite axis perpendicular to the surface. We report a reduction of the structural symmetry from Pnma (bulk) to P212121 (film). The P212121 symmetry revealed by synchrotron x ray remains at low temperatures. These PCCO films are metallic, and ferromagnetic below TC=170K, confirming the stabilization of excited Co3+ spin states and the suppression of the concurrent Co spin-state, valence, and metal-insulator transitions. Z-contrast imaging and electron-energy-loss spectroscopy elemental maps reveal long-range ordered oxygen vacancy planes unexpectedly stacking parallel to the interface, in spite of the tensile character of the PCCO/LAO heterostructure. In contrast to the general tendency reported for strained La0.5Sr0.5CoO3−δ (LSCO) films, we show that a nominal tensile strain can be also compatible with the presence of alternating O vacancy planes parallel to the interface, instead of perpendicular to it. That occurs thanks to the double cell of the film and the formation of the (1/2, 1/2, 1/2) superstructure studied in this work. These results expand the possibilities of controlling interfacial physical properties via engineering of ordered oxygen-defect structures in strongly correlated oxides.