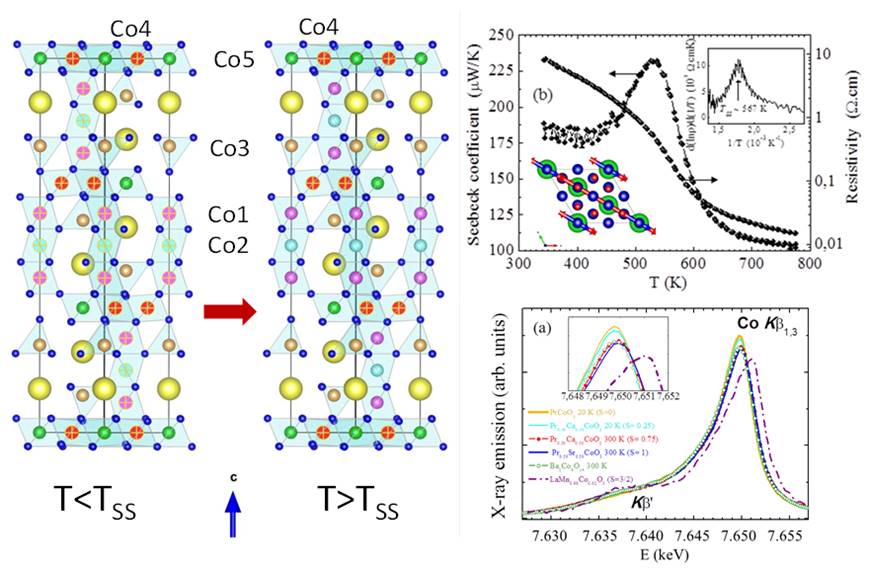 The mixed Ba2Co9O14Co2+/Co3+ system undergoes an insulator-insulator transition at TSS∼567Kthat arises from a spin-state transition at trivalent cobalt sites. Below this temperature, Co1, Co2, and Co4 are nonmagnetic (S=0, low spin). Ferromagnetically aligned Co5 spins are sandwiched between antiparallel planes of Co3 spins below TN≈41K. The successive antiferromagnetic trilayers are inverted along the c axis (compatible with Cc2/c,Cc2/m, or PS−1 magnetic space groups, depending on the moment orientation in the ab plane). The origin of the resistivity drop on warming was investigated by means of neutron and x-ray diffraction, x-ray absorption and emission spectroscopies, and x-ray magnetic circular dichroism. Charge-transfer multiplet calculations confirm that the divalent Co sites are both in an S=3/2 high spin state. Independently, the analysis of measured Co Kβ x-ray emission spectroscopy spectra agrees with this model. The magnetic moment from divalent Co5 ions is not fully ordered, likely due to the competition between magnetic anisotropy and weak supersuperexchange interactions, but not to covalency effects. Results agree with the spin blockade of electronic transport being partially removed at the octahedral trimers and also at the Co4O6 units within the CdI2-type layer.