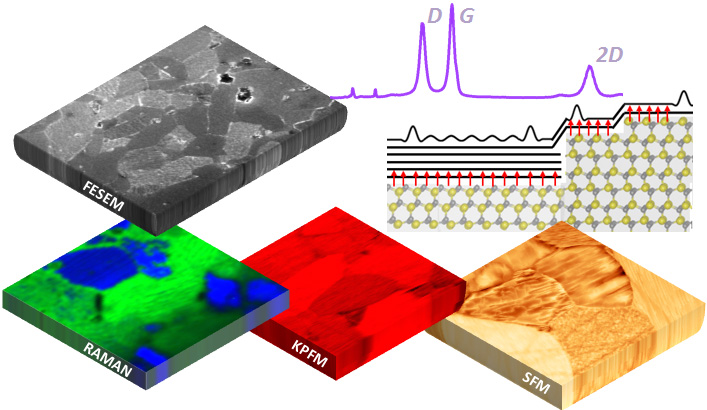 Continuous epitaxial graphene (EG) films have been grown on polished surfaces of dense polycrystalline SiC ceramics by heating in a Spark Plasma Sintering furnace (SPS). The confining of the sample into a graphite die and the use of a high pulsed dc current that triggers the joule heating of the system play a key role in the graphene formation by Si sublimation. The polycrystalline nature of the sample has allowed the comparison, through different local probe microscopies and micro-Raman spectroscopy, between EG films simultaneously grown on different SiC faces at exactly the same conditions, providing valuable information on their thickness, quality and stresses. Notably, whereas a graphene bilayer grows over Si-face grains, multilayer graphene (∼10 layers) forms on C-faces. The observed nano-electronic and nano-mechanical heterogeneities of the surface, showing up as differences in charge state and strain release mechanisms, are found to arise from the dependence of the EG properties when developed on each grain orientation; the same applies in the case of the macro-mechanical scratch resistance. SPS demonstrates to be a reliable and flexible methodology to prepare continuous graphene films on SiC components with many possibilities for scaling-up at low cost.