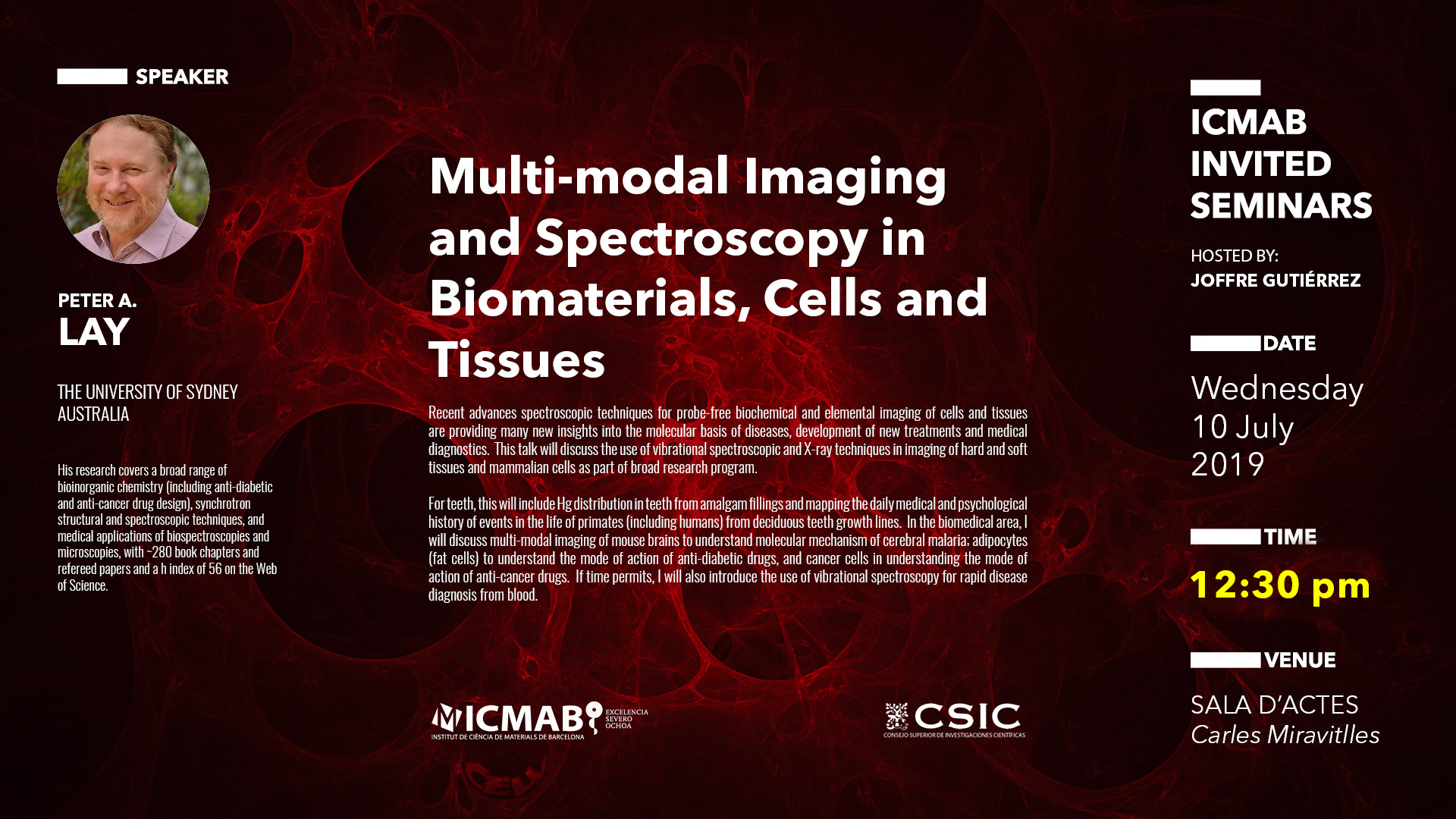 "Multi-modal Imaging and Spectroscopy in Biomaterials, Cells and Tissues" by Peter A. Lay (Wed, 10 July 2019)

"Multi-modal Imaging and Spectroscopy in Biomaterials, Cells and Tissues" by Peter A. Lay (Wed, 10 July 2019)

The Seminars and Training Committee kindly invites you to the following ICMAB Invited Seminar:


Multi-modal Imaging and Spectroscopy in Biomaterials, Cells and Tissues

by Peter A. Lay, The University of Sydney

Recent advances spectroscopic techniques for probe-free biochemical and elemental imaging of cells and tissues are providing many new insights into the molecular basis of diseases, development of new treatments and medical diagnostics.  This talk will discuss the use of vibrational spectroscopic and X-ray techniques in imaging of hard and soft tissues and mammalian cells as part of broad research program.

For teeth, this will include Hg distribution in teeth from amalgam fillings and mapping the daily medical and psychological history of events in the life of primates (including humans) from deciduous teeth growth lines.  In the biomedical area, I will discuss multi-modal imaging of mouse brains to understand molecular mechanism of cerebral malaria; adipocytes (fat cells) to understand the mode of action of anti-diabetic drugs, and cancer cells in understanding the mode of action of anti-cancer drugs.  If time permits, I will also introduce the use of vibrational spectroscopy for rapid disease diagnosis from blood.

Professor Lay completed his PhD at the Australian National University (1981), then was a CSIRO postdoctoral fellow (Stanford University & CSIRO), and an Australian Research Council (ARC) Queen Elizabeth II Fellow (Deakin University) before he joined the University of Sydney as a lecturer (1985) where he progressed to a professorship in 1997 and Head of School (2001-2002). He is currently Professor of Chemistry and Academic Director, Sydney Analytical (a very large University Core Research Facility covering Vibrational Spectroscopies and Microscopies, X-ray techniques including diffraction, scattering and spectroscopies, Drug Discovery infrastructure & Magnetic Resonance including NMR and EPR spectroscopies).  He is a Fellow of the Australian Academy of Science and received its highest award in Chemistry, the David Craig Medal in 2013. He has held two ARC Professorial Fellowships (2002-2007, 2009-2013); was awarded the Rennie, Burrows (Inorganic) and H. G. Smith (All Chemistry) Medals of the Royal Australian Chemical Institute of which he is a Fellow.  He is also a Fellow of the Royal Society of New South Wales.

His research covers a broad range of bioinorganic chemistry (including anti-diabetic and anti-cancer drug design), synchrotron structural and spectroscopic techniques, and medical applications of biospectroscopies and microscopies, with ~280 book chapters and refereed papers and a H index of 56 on the Web of Science.