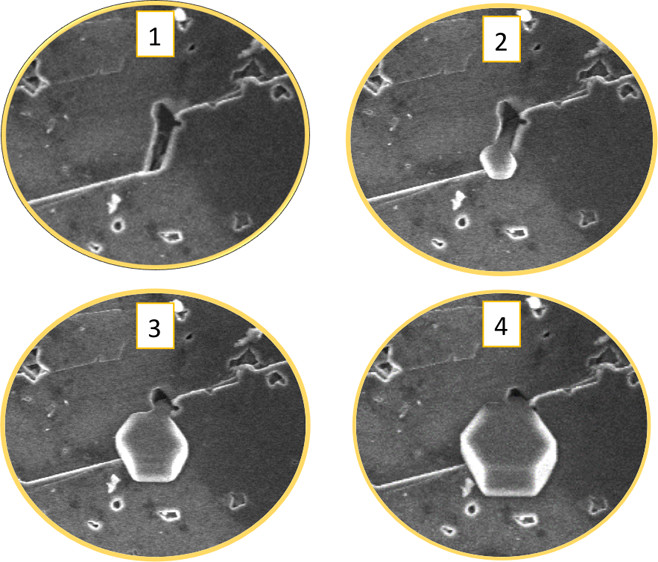 Feldspar particles have been considered to be responsible for a large proportion of the ice nucleation particles present in clouds. In this work, using environmental scanning electron microscopy (E-SEM), we investigated ice nucleation on different faces of feldspar minerals exposed to water vapor below water saturation conditions. Our experiments revealed that nucleation was dominated by natural microsized pores exposed at the surface of the mineral upon cleavage. Eighty to ninety percent of the sites where ice crystals appeared in the nucleation experiments were related to a pore. Ice crystals appeared at the same sites and with the same orientation in consecutive nucleation experiments, indicating an overimposed template from the surface to the ice crystallographic growth.

Sequences of E-SEM images showed that ice growth inside pores starts with the filling of the pore and then the growth of the crystal outside the pore, as described by the pore condensation freezing theory to explain ice nucleation in porous materials exposed to humid air below saturation. Microsized pores are too large to satisfy the theoretical conditions for pore condensation freezing theory, but high magnification SEM images revealed the presence of additional pores at the nanoscale inside the microsized pores. Our findings demonstrate that porosity in feldspar particles plays a key role in determining its ice nucleation efficiency in the deposition mode.