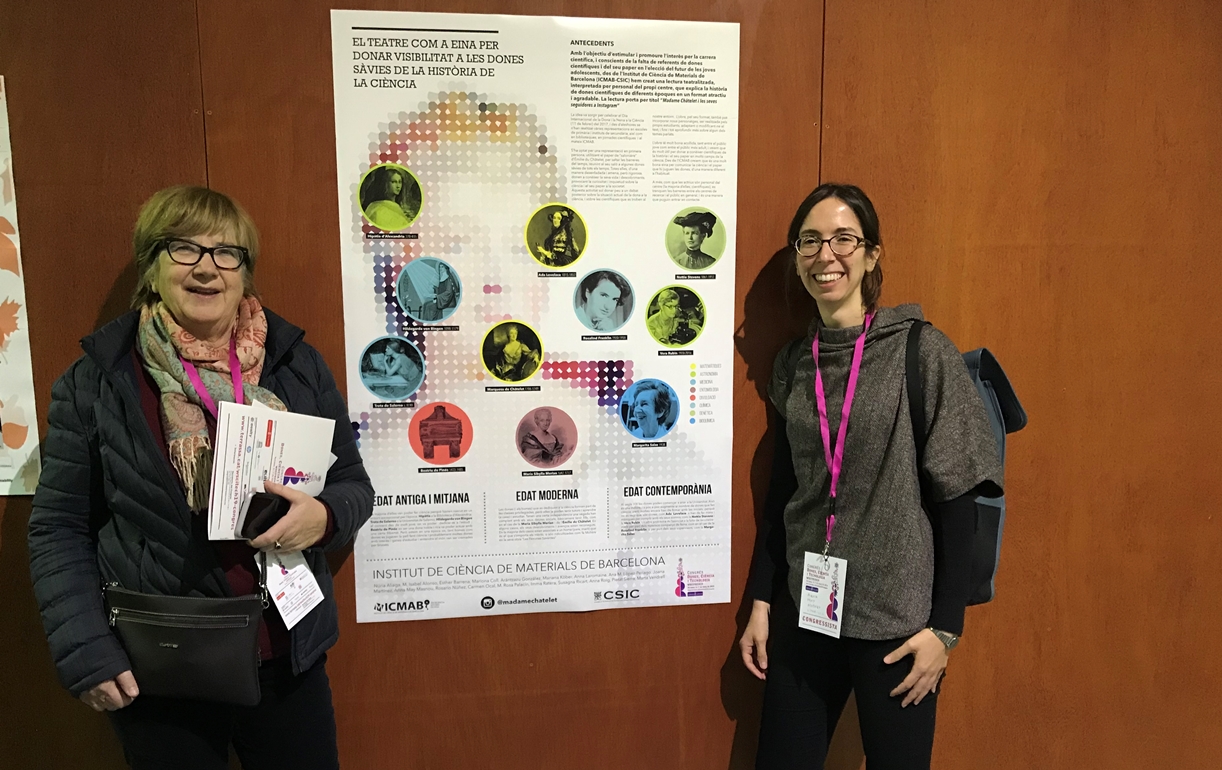 "Theater as a tool to visibilize women scientists" presented at the Women, Science and Technology Conference in Terrassa

"Theater as a tool to visibilize women scientists" presented at the Women, Science and Technology Conference in Terrassa

Terrassa held on 6-7 March 2019 the first edition of the "Women, Science and Technology" (WSciTech19) Conference (Congrés de Dones, Ciència i Tecnologia) and the "Châtelet team" at ICMAB presented their dramatised lecture "Madame Châtelet and her Instagram followers" as a tool to visibilize the wise women in the history of science. Susagna Ricart and Anna May, in representation of the team, presented a Poster, and an Oral Communication, which resulted in a fantastic colloquium.

We presented the talk "The theater as a tool to visibilize wise women of the history of science", in which we propose the dramatised lecture "Madame Châtelet and her Instagram followers" as an attractive way to introduce women scientists to the society, in particular, to the young students. In our initiative we present women scientists from all over the world and from all times (from Hypatia of Alexandria to Margarita Salas) in a way that is easy to understand for the general public.

Having women role models and knowing the stuggles and discoveries of women scientists along history is important for those young boys and girls who are not aware of it and who have to decide their future. Moreover, the lecture, as it is represented by women from ICMAB is also a way to approach the current researchers to the young people and to the society. 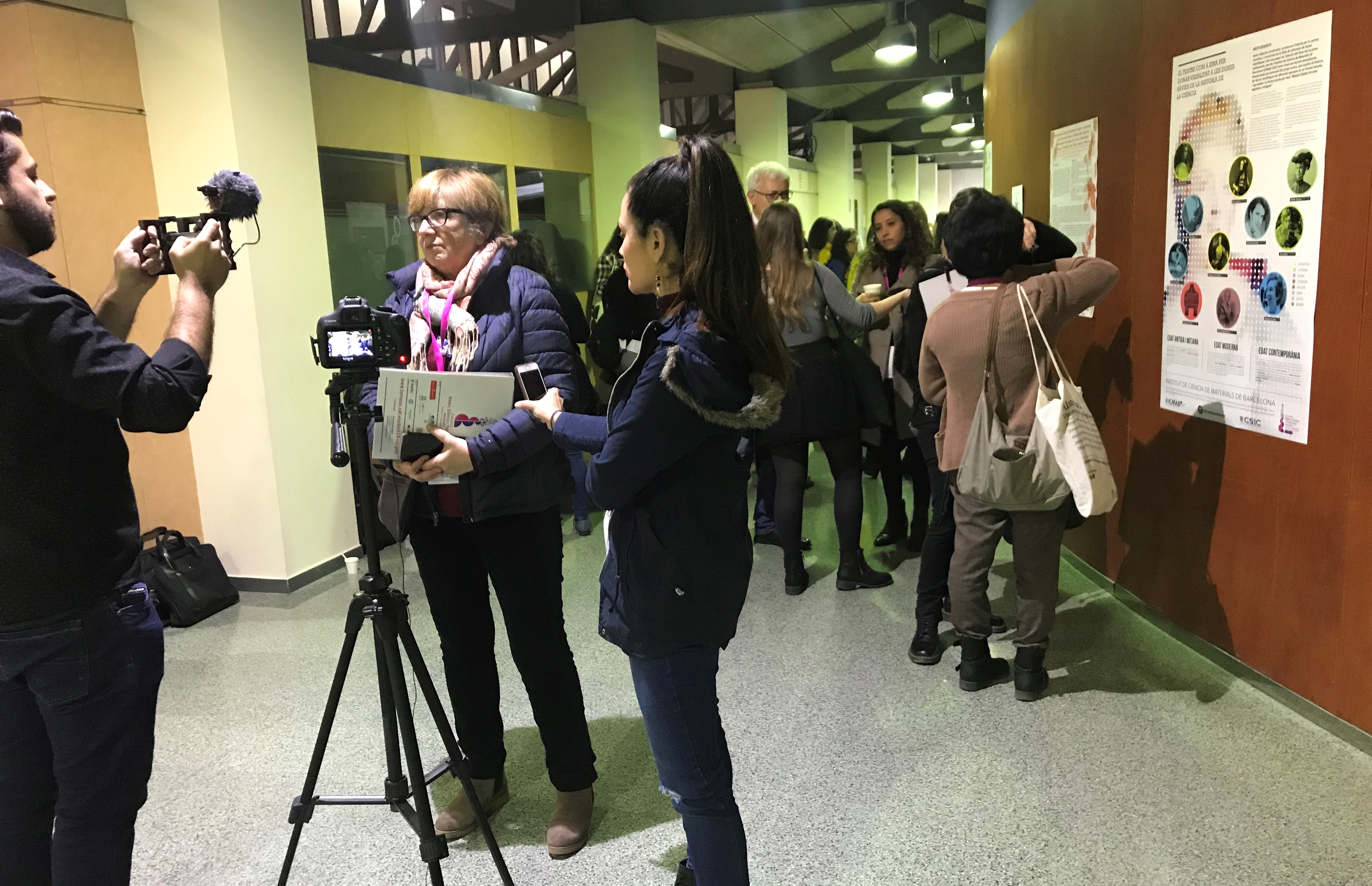 Figure: Susagna Ricart is being interviewed by the "Càtedra UNESCO" at the Women, Science, Technology Conference in Terrassa. In the wall, the "Madame Châtelet" poster.

Women are more than half of university students (55%). They get better grades than men and mostly graduate (59%) but, from the doctorate there is a clear and continuous decrease in their presence. Thus, only 20% of the research/university professors are occupied by women. This is what is called vertical segregation (as higher the positions of power, the less the women present).

Segregation can also be horizontal segregation: there are study fields with more women than others. Women account for 25% of engineering and architecture students and only 10% in ICT (information and communication technologies) engineering, according to Anna Berga, president of the Women and Science Committee of the Interuniversity Council of Catalonia (Comissió Dones i Ciència del Consell Interuniversitari de Catalunya - CIC), who gave the first talks at the WSciTech19 conference.

During the two days of the conference, 400 people attended 68 presentations on 4 areas, science, technology, health and communication, with the aim of visibilizing inequalities and not normalizing them.

The congress is jointly organized by the City Council, the Polytechnic University of Catalonia (UPC) and the University School of Nursing of Terrassa (EUIT), with the collaboration of the Societat Catalana de Tecnologia (SCT). It is framed within the events of March 8 and at a time when women's role is being demanded globally.

One of the main objectives of the conference is to provide data about women contributions in science, technology, health and communication to the society and to the future generations. It also wants to be a platform for reflection and sensibilization about gender equality and would like to give voice to initiatives in this field. 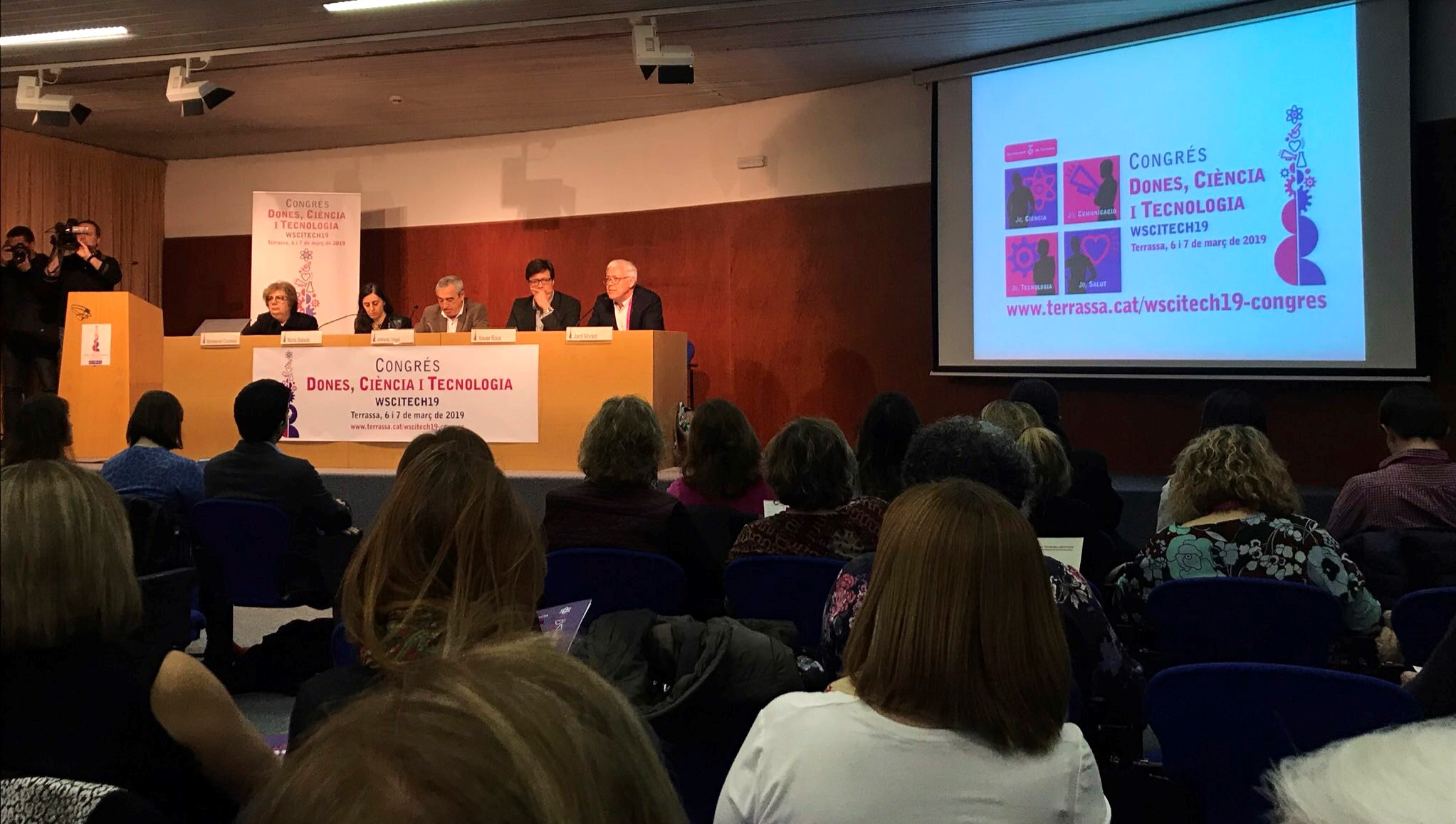 Figure: Representatives of the conference organizers during the Opening of the WSciTech19 conference in Terrassa.

See this video from terrassadigital.cat about the conference: