This year the ICMAB counted with 7 out of the 34 fellowships for Master students that the CSIC distributed among the five Severo Ochoa Centres of Excellence of the CSIC (Instituto de Ciencias Matemáticas (ICMAT), Centro Nacional de Biotecnología (CNB), Instituto de Física Corpuscular (IFIC), Instituto de Neurociencias (IN) and Institut de Ciència de Materials de Barcelona (ICMAB); and the Structural Biology Unit of Excellence María de Maeztu. The 7 granted students will do their Master Thesis Project with one of our researchers during 5 months, and will receive 5,000 €. 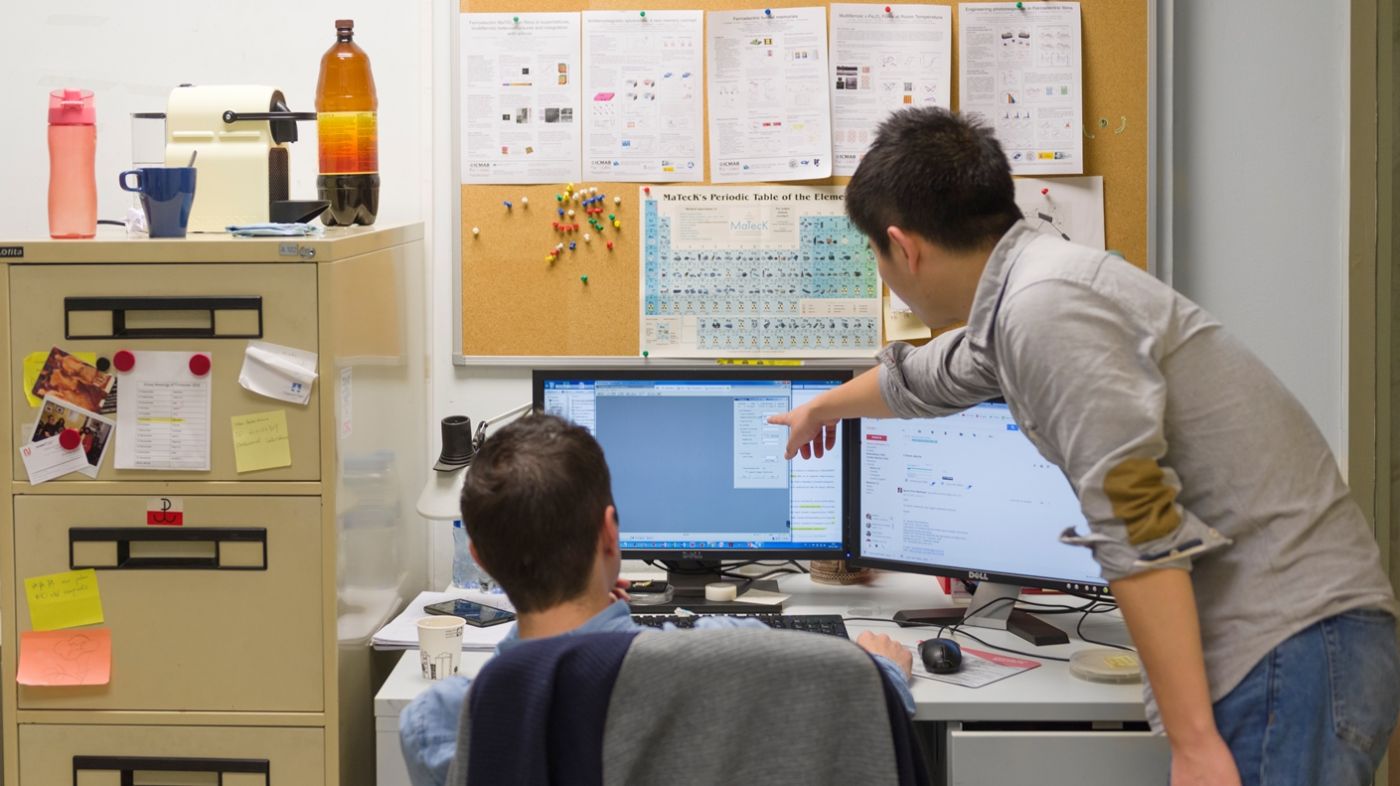 The objective of these fellowships is to initiate them to the scientific career and introduce them to the university academic research and to the possibilities that these Severo Ochoa Centres of Excellence and Maria de Maztu Units of Excellence can offer them.

The call was open to undergraduates with a minimum academic record from any scientific origin (mainly Physics, Chemistry, Nanotechnology, Biochemistry, Engineering, etc.). The candidates were evaluated by an external committee, and all of them have an excellent academic record.

This year's granted Master Students, and their respective supervisor and project are the following:

We can chemically and structurally tune the properties of novel materials which they will shape drugs, sensors and in other biochemical applications, however their interaction with biological tissues is usually not studied in depth. The lack of a time- and batch-efficient method to evaluate novel materials and processes prevents establishing general fundamental principles and impedes the progress.Caenorhabditis elegans (C. elegans) is an invertebrate, transparent worm with 60% genetic homology to humans which we will use to evaluate the NPs. Student will learn to work with nanoparticles from the synthesis and characterization point of view and additionally will study the nano-bio interaction with C. elegans.

Cellular morphogenesis is orchestrated by multifaceted signaling pathways of the surrounding environment, which enable cells to differentiate. The work will consist in the modification of surfaces with molecular and bio-nanomaterials to control the cell-material interface for cell guidance studies. Towards this aim, the student will use electroactive molecular self-assembly monolayers (SAMs) as dynamic, model substrates to trigger the organization of growth factors in a biomimetic way, to stimulate the spatial and temporal cues of the natural microenviroment.Using surface characterization techniques like AFM, electrochemical SPR, fluorescence confocal microscopy, or SEM the role of the student in the project will consist to find effective ways to anchor (by specific self assembly monolayers, etc…) and pattern (by microcontact printing or other lithographic techniques) the biomolecules or bio-nanoparticles onto surfaces to stimulate cell proliferation, differentiation and motility.

Despite the enormous efforts in Cancer research worldwide, we are still far from efficient medicines in many cases. Encouragingly, Dr. C. H. June (Penn University, US) and collaborators described the remission of otherwise terminal leukemia patients with genetically modified autologous T cells using an adoptive T cell therapy. This therapy consists of the isolation of T cells, their ex vivo activation and expansion, and the subsequent autologous administration. Nevertheless, the ability to expand T cells in high quantities with a determined phenotype and at a reasonable cost remains a limiting factor for the translation of cancer immunotherapies to clinics. To improve such limitation, we are designing and synthetizing artificial stimuli-responsive supramolecular hydrogels. These hydrogels will have tunable chemical and mechanical properties which we expect to enhance T cell proliferation rates while controlling the cellular phenotypes ex-vivo. The student will purify T cells from human peripheral blood and analyze T cell adhesion, activation, proliferation and differentiation in dynamic supramolecular hydrogels with different techniques such as ELISA tests, flow cytometry and optical microscopy to help improving adoptive T cell therapies.

Quatsomes are a novel class of lipid-based nanovesicles, showing outstanding properties as nanocarriers. In particular, they show small size, high surface charge density, spherical shape and unilamelarity. Compared to other vesicular systems they show an outstanding particle-to-particle homogeneity as well as long term colloidal and chemical stability (up to 2 years). These nanovesicles are ideal candidates for nucleic acid delivery. In the frame of this project, the student will be involved in Quatsomes/Nucleic Acid complexes preparation and in their  characterization by dynamic light scattering, z-potential, cryo-TEM and gel electrophoresis assays.

Metal Organic Frameworks (MOFs) field has advanced enormously in the last 20 years. This crystalline materials are formed by organic ligands (based on carbon) and metallic ions, giving place to porous crystalline networks with a wide range of properties, such as gases separation or storage. The objective of this project is to solve one of the major problems of this compounds: water inestability. To do so, we will synthesize ligands that incroporate carboranes (boron-based clusters), and we will use them to prepare MOFs. The carborane unit presents a high chemical and thermal stability and a high hydrophobicity. This property is key for the water stability of MOFs.

Although rare, a spontaneous breakdown of inversion symmetry sometimes occurs in a material which is metallic; these are commonly known as "polar metals", or "ferroelectric metals". Their interest lies in the unusual physics that emerges from a coexistence of inversion symmetry breaking and spin-orbit effects. Their "polarization", however, cannot be switched via an electric field, which limits the experimental control over band topology. Here we shall investigate, via first-principles theory, flexoelectricity as a possible way around this obstacle.

This project pursues the use of unconventional nanofabrication techniques to produce flexible and low cost large area plasmonic crystals and metasurfaces. We will investigate the exciting optical properties of photonic architectures fabricated via soft nanoimprinting lithography (NIL) a low cost and roll to roll compatible fabrication route. The ultimate goal is to implement the photonic components into real optoelectronic devices but maintaining the low costs and ease of manufacture.

Congratulations to all the students, and to the researchers who will supervise them!