Acoustic spin waves: towards a new paradigm of on-chip communication

For the first time researchers have observed directly sound-driven spin waves (magnetoacoustic waves) and have revealed its nature. Results show that these magnetization waves can go up to longer distances (up to centimeters) and have larger amplitudes than the commonly known spin waves.

The study, published in Rev. Lett., is carried out by researchers from the University of Barcelona (UB), the Institute of Materials Science of Barcelona (ICMAB-CSIC), and the ALBA Synchrotron, in collaboration with the Paul-Drude-Institut in Berlin. The study is part of the journal's Editors' Suggestion articles, and has also been featured in the popular Physics online journal in the Focus section.

The observation of the magnetization waves was performed in a Nickel ferromagnetic thin film, which was excited by a deformation wave (called surface acoustic wave, SAW) originated in a piezoelectric substrate layer below the Nickel film. Although clear interaction between acoustic waves and magnetization dynamics has been reported in several systems, thus far, no direct observation of the underlying magnetic excitations existed, providing a quantification of both time and space.

Now researchers have published in Physical Review Letters their findings:

“We designed an experiment ad hoc to image and quantify the magnetization dynamics generated by surface acoustic waves (SAW). The results clearly show that magnetization waves exist at distinct frequencies and wavelengths and that it is possible to create wave interferences” explains Ferran Macià, leader of the project at the Institute for Nanoscience and Nanotechnology of the University of Barcelona (IN2UB) and ICMAB.

The experiments show interference patterns of magnetization waves and provides new avenues for manipulation of these waves at room temperature.

“Our magnetization waves are coupled to the acoustic waves and thus, can travel long distances and have larger amplitudes than spin waves” explains Michael Foerster, beamline scientist of CIRCE-PEEM at ALBA.

Such large-amplitude, long-distance waves could be well-suited for carrying information, processing data, or driving small motors.

The generation of magnetization dynamics through acoustic waves has attracted interest because it has some advantages over magnetic field induced excitations, such as more energy efficiency, larger spatial extension, or match of wavelengths.

The experiments were performed using the PEEM (Photoemission Electron Microscopy) at the CIRCE beamline at the ALBA Synchrotron to image the magnetization waves, which were synchronized with the synchrotron light pulses.

“As wave are dynamic objects, they were imaged with stroboscopic snapshots thanks to this synchronization. The X-ray magnetic circular dichroism (XMCD) effect was used to obtain magnetic contrast in the images” explains Macià.

The study, in collaboration with the Paul-Drude-Institut in Berlin, was in the framework of a Frontier Interdisciplinary Project (FIP) of the ICMAB Severo Ochoa grant. The FIPs are aimed to develop high-risk exploratory projects of interdisciplinary character to generate cutting-edge research in the application areas of energy, electronics or health. The study is part of the journal's Editors' Suggestion articles, and has also been featured in the popular Physics online journal in the Focus section. 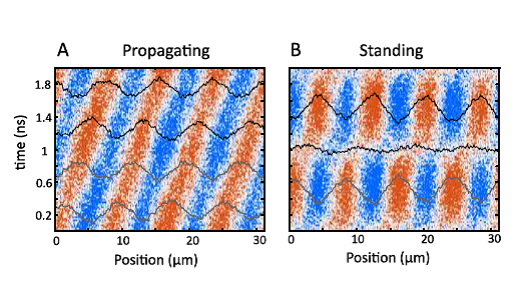 Figure 1: A propagating and a standing magnetization wave in ferromagnetic Nickel, driven by magnetoelastic coupling to a surface acoustic wave in a piezoelectric LiNbO3 substrate. The images combine line profiles (color indicating the local magnetization direction) at different delay times between the probing X-ray pulse and the electrical SAW excitation.

Cover Figure: Scheme of the strain caused by the surface acoustic waves (SAWs) in the piezoelectric (in green color scale) and magnetic modulation in the ferromagnetic material (in orange-cyan color scale).