The 12th International Conference on Hybrid and Organic Photovoltaics #HOPV20 was an online conference held beween 26 and 29 May 2020. Enrique Pascual, PhD fellow at the Nanopto Group, received the Best ePoster Content and Discussion award at the Symposium S4 on Organic Solar Cells. His poster was entitled "Towards Photovoltaic Windows: Laser-assisted Fabrication of Semitransparent OPV Modules Based on Non-fullerene Acceptors’". Congratulations!

Participation of the Nanopto Group at the Online Conference #HOPV20

Instead of being cancelled, like many others, the 12th International Conference on Hybrid and Organic Photovoltaics (HOPV 2020) was held online, adapting itself to the current scenario, between 26 and 29 May 2020.

Several Nanopto Group members participated presenting the so-called ePoster, which is an online version of a traditional poster. The conference participants could interact with poster authors via online chat, like it happens during a face-to-face Poster Session.

In particular, Nanopto ePosters were:

The Best ePoster Content and Discussion of Symposium 4, awarded to Enrique Pascual for his poster on Organic Solar Cells, was sponsored by Energy and Environmental Science Journal.

You can find more information about the #HOPV20 Online Conference on the nanoGeConferences Twitter account (@nanoGe_Conf). nanoGe is a brand for science conferences being developed around the year in different areas of the world since 2009.

Semitransparent organic photovoltaics (OPV) have unique properties for niche applications in the so-called building-integrated photovoltaics (BIPV) that require transparency such as windows or glazings.

Moderate levels of transparency were traditionally achieved by implementing non-opaque electrodes and thin photoactive layers, thus limiting the light-harvesting capacity. The deposition of such semitransparent electrodes generally requires an evaporation step, thus increasing the device price. As a cost-effective alternative to boost simultaneously the efficiency and transparency of OPV modules, solution-processed electrodes and near inferred absorber photoactive materials are employed nowadays. 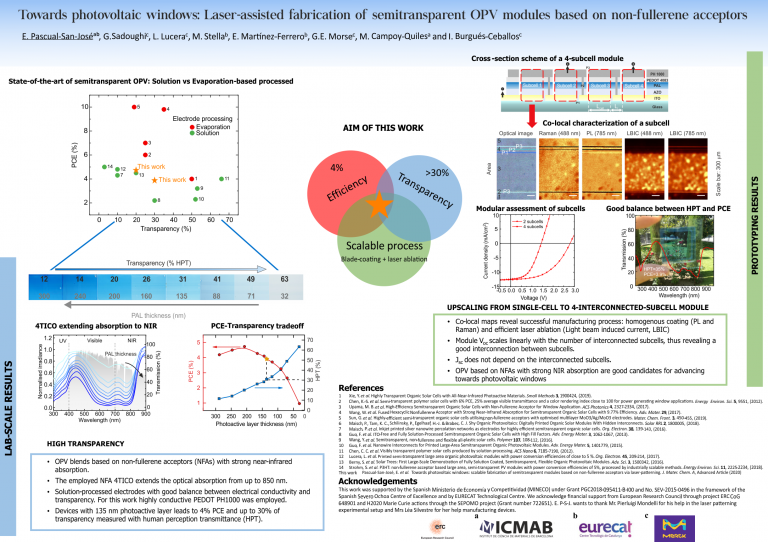 Our prototypes of semitransparent laser-patterned OPV modules exceed 30 % of transparency and yield efficiencies in the range of 4%, geometrical fill factors surpassing 90 % and an active area above 1 cm2. We verify the quality of cell-to-cell interconnection and optimise the geometry of the modules with the help of local optoelectronic imaging techniques.

The ePoster summarises the recent work published in the Journal of Materials Chemistry A "Towards photovoltaic windows: scalable fabrication of semitransparent modules based on non-fullerene acceptors via laser-patterning" by researchers from the Nanopto Group at the ICMAB, EURECAT (Centre Tecnològic de Catalunya) and Merck Chemicals Ltd. (UK).

The study is the result of the internship that Enrique Pascual did in 2018 in Merck Chemicals in Southampton as part of his PhD programme.

Take a look at the news in the Nanopto website.