A study published in the journal Energy and Environmental Science has combined experimental and theoretical approaches to study the passivation layers formed on calcium metal electrodes and their influence on the reversible operation of calcium-based batteries. The work is led by researchers from the ICMAB-CSIC, who have collaborated with the ALBA Synchrotron (MIRAS beamline) as well as with other international laboratories and universities.

A battery is formed by three main components: two electrodes (anode and cathode) separated by an electrolyte. The study of the interface between the electrolyte and the electrodes is crucial in the case of reversible batteries, which experience continuously a charge/discharge process.

Developing high-capacity batteries is crucial to favour the transition from fossil fuels to renewable sources of energy. As there are serious doubts about the sustainability of lithium-ion batteries in this context, several next-generation technologies are currently under research. To develop new battery chemistry with high energy density and long life, anode and cathode materials with enhanced capacity and cyclability are required.

Metallic calcium has a theoretical gravimetric capacity about 3.6 times higher than the current graphitic anode used in lithium-ion batteries. Its high capacity, combined with its high reductive power, makes calcium metal an excellent candidate as an anode material for next-generation batteries.

Yet, the application of calcium metal anode has been heavily restricted due to the lack of electrolyte solutions allowing its reversible operation. As the electrolyte is in permanent contact with both the anode and the cathode, the interfacial processes are key in the reversible charge/discharge of the battery.

The presence of such SEI layer is not intrinsically detrimental for the operation of the battery. Quite the contrary, its correct operation allows for long cycle life as observed in lithium-ion commercial batteries. However, given the divalent charge of Ca2+ ions, producing a suitable calcium SEI layer is an open challenge for this technology.

In this study, published now in Energy and Environmental Science, the authors provide the first detailed description of a borate-based passivation layer (or SEI) formed on metallic calcium allowing for the divalent cation migration and reversible metal operation.

FTIR microspectroscopy (performed at the MIRAS beamline, ALBA Synchrotron), XPS (performed at IPREM) and TEM-EELS (performed at LRCS) experiments allowed to determine the chemical composition of the passivation layer, and demonstrated the presence of borates, CaF2 and organic (polymeric) species when using the Ca(BF4)2 electrolyte, whereas when using a control electrolyte without boron (Ca(TFSI)2), the main components were carbonates.

“We observed that the electrolyte containing Ca(BF4)2 produces a SEI layer rich in organic compounds and containing borate species, mostly as [BO3] moieties. The presence of such boron moieties appears to be crucial for Ca2+ transport, as the control electrolyte, without any boron source, produced a blocking SEI layer which halts the electrochemical response of the metallic electrode” explains Juan Forero-Saboya, ICMAB researcher and first author of the paper. 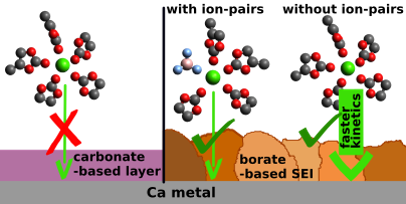 The identification of borate species as responsible for calcium ion transport is the first step in the path of SEI engineering. “Understanding the chemical nature of these passivation films and being able to engineer them is crucial for the future development of calcium-metal and other divalent metal batteries” adds Forero-Saboya.

In this regard, the authors also present a proof-of-concept showing that the borate-rich passivation layer guarantees electrochemical response in different electrolyte media. Testing of different electrolyte solutions with pre-passivated calcium metal electrodes highlighted the strong relationship between the metal plating/stripping kinetics (related to the power performances of the metal anode) and the cation solvation structure in solution. 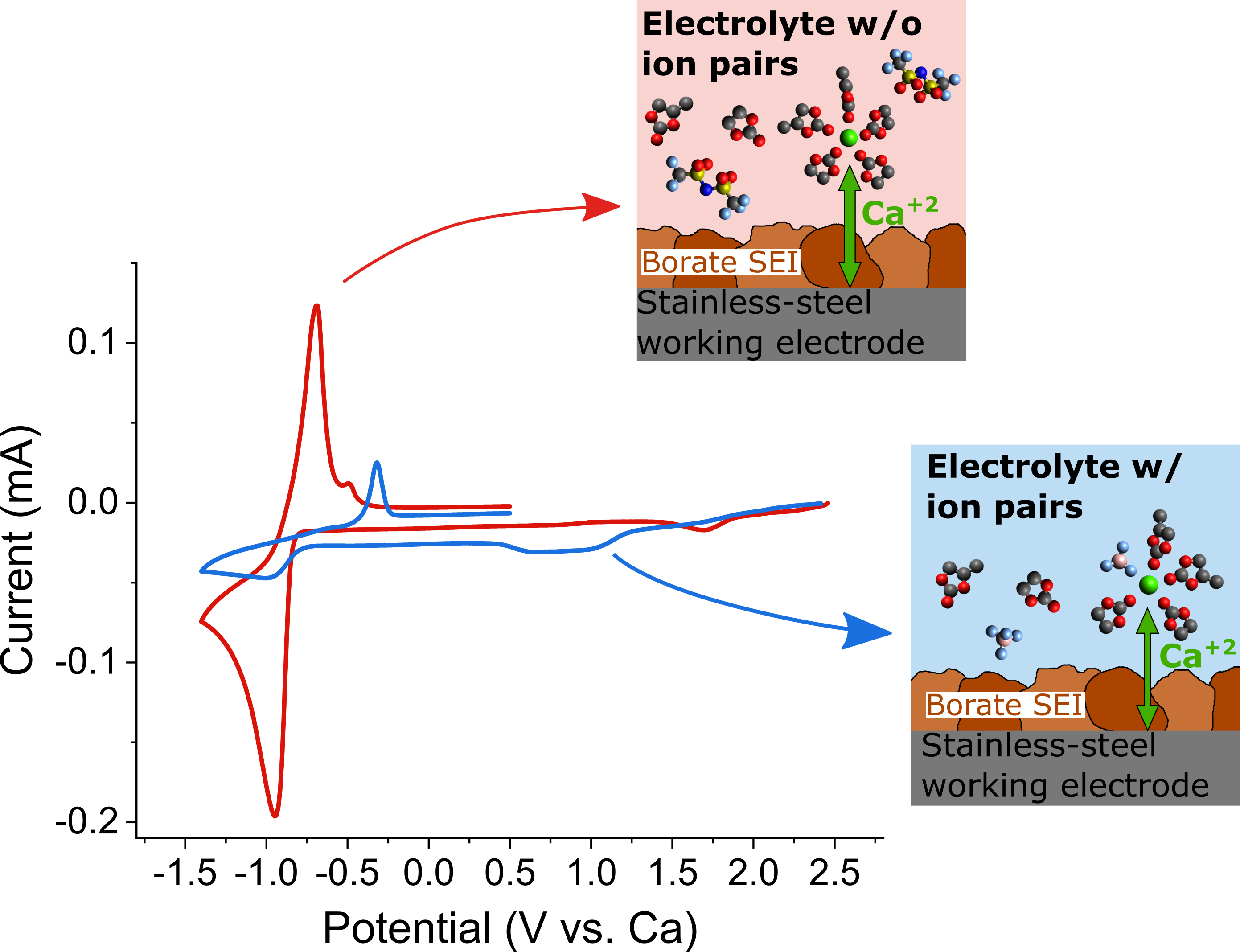 This study was performed in the framework of the CAMBAT project (ERC starting grant, PI:  Alexandre Ponrouch) and was performed in a collaboration with researchers from the ALBA Synchrotron, the LRCS in Amiens, the IPREM in Pau (both in France) and The National University of Singapore.