As part of the celebration of the European Sustainable Energy Week, the Vice-presidency of International Relations of the CSIC has organized a campaign that aims to raise awareness about sustainable energy and its efficient use through the promotion of CSIC's European projects. Next Thursday 25 June at 1 pm the online round table will take place: "Accessible, clean and sustainable energy in the future: connecting the ODS and the European Green Deal", in which M. Rosa Palacín, ICMAB researcher, will participate.

The roundtable will be moderated by Elena Domínguez, Vice President of International Relations (CSIC), and will be attended by M. Rosa Palacín (ICMAB), Mª Cruz Alonso (IETCC), Pablo del Rio (IPP, CCHS) and Fernando Fermoso (IG), who will talk about their experience in the field, highlighting their participation in European projects and their vision of the sector in the future.

In order to access the event it is necessary to register at the following link. 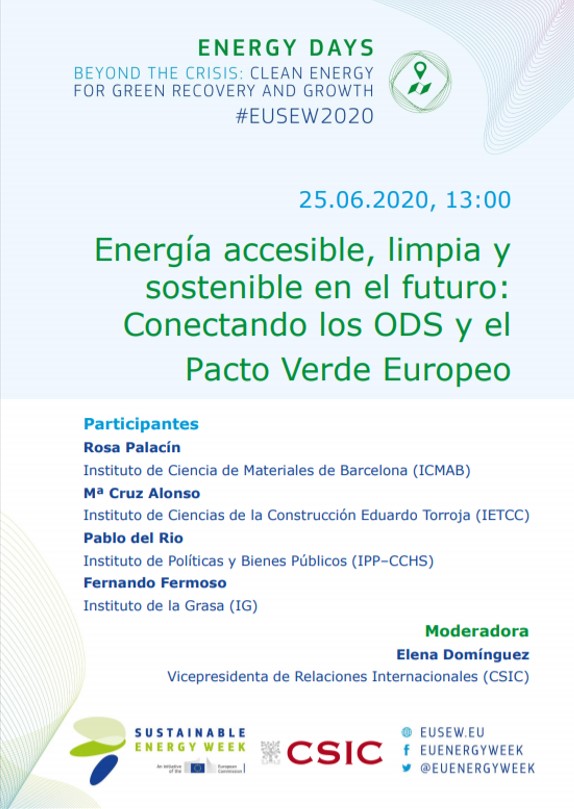 Her scientific activity initiated in 1995 after completion of PhD on solid state chemistry dealing with complex perovskite oxides. Following a post-doctoral stay at LRCS (France), she started a research line on inorganic battery materials at ICMAB-CSIC in 1998.

Her career has been fully focused in solid state chemistry (synthesis and crystal chemistry) and electrochemistry applied to batteries and covered a wide diversity of technologies with either aqueous or organic electrolytes. These include already commercial (e.g. Ni or Li-ion) or pre-commercial (Na-ion) concepts, as well as new emerging chemistries such as those based on Mg or Ca, in which she has been pioneer.

Her main achievements include (i) understanding of the structural transformations taking place at the positive electrode in Ni based batteries through operando diffraction and correlation between defects in the crystal structure and electrochemical performance, (ii) systematization of mechanisms and bottlenecks in electrode materials operating via conversion redox reactions in lithium cells, (iii) pioneering electrolyte optimization for Na-ion batteries and (iv) demonstration of the viability of calcium metal as anode material, first step towards proof-of-concept of a new calcium based rechargeable battery technology.

She has always placed emphasis on developing fertile cooperation scenarios between basic oriented research and industry, and often performed research under direct industrial contracts. She has published > 140 articles in peer reviewed journals, referenced over 8000 times, h-index of 38 (WoS) and is co-inventor in 9 patents (6 of them jointly owned with industry). She has been PI of diverse National and European grants and industrially funded projects, always related to battery research and invited to write reviews in both high impact and specialized journals covering materials (standard or new redox concepts, aqueous and non-aqueous technologies) and also degradation/failure mechanisms with those in Chem. Rev. (2019), Chem. Soc. Rev. (2009 and 2018), Science (2016), JACS (2015), JES (2015) and Adv. Mat. (2010) deserving special mention. Her achievements have led to the establishment of a significant number of collaborations and international recognition (21 Invited/Keynote talks in the last 5 years, presence in diverse international advisory boards etc.), being recently elected for the Governing Board, Batteries Europe ETIP.