"Energy materials for a low carbon future": a philosophical discussion of the Royal Society with ICMAB researchers

Mariano Campoy Quiles, Alex Ponrouch and M. Rosa Palacín participated in the meeting of the Royal Society about ‘Energy Materials for a Low Carbon Future’ held in September 2018, in the fields of "Organic Thermoelectrics" and "Post -Li batteries". The opinions were published then in the Philosophical Transaction of the Royal Society in July 2019. 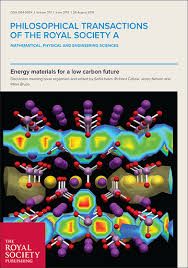 The development of low carbon energy technologies is widely accepted as among the most urgent challenges of our time in order to reduce carbon emissions that contribute to climate change and to deal with the emerging issue of air pollution. The performance of such technologies is crucially dependent on the fundamental properties of the component materials. Indeed, innovative materials science lies at the heart of advances that have already been made in the energy field; an excellent example being the rechargeable lithium-ion battery, which has been instrumental in advancing the revolution in portable electronics. It has become increasingly clear that the next generation of energy technologies depends critically on new materials, new approaches and greater understanding.

These important issues provided the stimulus for the Royal Society discussion meeting on ‘Energy Materials for a Low Carbon Future’ held in September 2018 on which this issue is based. This discussion meeting was a timely opportunity to bring together world-renowned experts with wide and complementary experience in the field of batteries, solar power, thermoelectrics and fuel cells, and highlighted cross-disciplinary approaches between scientists and engineers. The meeting aimed to survey the present state of the art in materials chemistry, physics and engineering underlying modern low carbon energy technologies, and to identify those areas where fundamental developments in materials science are needed.

One of the highlights of the discussion meeting was the ‘flash’ poster session of 25 one-slide, one-minute talks on the posters that were being presented by PhD students and postdoctoral researchers describing their latest discoveries. And all were on time! This made for a very exciting and lively poster session. Following the two-day meeting in London that was attended by more than 280 participants, a satellite meeting was held at Chicheley Hall and attended by around 60 invited delegates; the workshop-type format of the latter meeting provided greater time for discussion on key issues relevant to modern energy materials research.

The meetings considered the challenges posed by solar cells, batteries, fuel cells and thermoelectrics, which was achieved by tackling a range of key cross-disciplinary themes including new materials discovery; transport processes; nanostructures and interfaces; and materials modelling and design; in addition to these scientific themes, societal and economic issues of climate change were also discussed. The cross fertilization of ideas and methods, including experiment, theory and computation, came out during the meetings, and will be critical for rapid progress.

Although general topics will be mentioned, it is beyond the scope of this editorial to give an exhaustive survey of all the excellent articles in this issue. A range of studies on energy materials are covered illustrating the breadth of high-quality work. For instance, contemporary work on materials for ‘beyond lithium-ion’ battery technologies is illustrated by studies of magnesium- and sodium-ion batteries. Different features of thermoelectrics include articles on transition metal sulfides, nanostructured tellurides, oxide ceramics and organic materials. Recent advances in developing photovoltaics are illustrated by work on lead halide perovskite solar cells and p-type dye-sensitized solar cells.

The two articles by ICMAB authors that are part of the discussion meeting issue ‘Energy materials for a low carbon future’ are the ones below:

The generally low energy density from most heat sources—the Sun, Earth as well as most human activities—implies that solid-state thermoelectric devices are the most versatile heat harvesters since, unlike steam engines, they can be used on a small scale and at small temperature differences. In this opinion piece, we first discuss the materials requirements for the widespread use of thermoelectrics. We argue that carbon-based materials, such as conducting polymers and carbon nanotubes, are particularly suited for large area and low-temperature operation applications, as they are abundant, low-toxicity and easy to process.

We combine experimentally observed macro-trends and basic thermoelectric relations to evaluate the major performance limitations of this technology thus far and propose a number of avenues to take the thermoelectric efficiency of organic materials beyond the state of the art. First, we emphasize how charge carrier mobility, rather than charge density, is currently limiting performance, and discuss how to improve mobility by exploiting anisotropy, high persistence length materials and composites with long and well-dispersed carbon nanotubes. We also show that reducing thermal conductivity could double efficiency while reducing doping requirements. Finally, we discuss several ways in which composites could further boost performance, introducing the concept of interface engineering to produce phonon stack-electron tunnel composites.

Current societal challenges in terms of energy storage have prompted an intensification in the research aiming at unravelling new high energy density battery technologies. These would have the potential of having disruptive effects in the world transition towards a less carbon-dependent energy economy through transport, both by electrification and renewable energy integration. Aside from controversial debates on lithium supply, the development of new sustainable battery chemistries based on abundant elements is appealing, especially for large-scale stationary applications. Interesting alternatives are to use sodium, magnesium or calcium instead of lithium.

While for the Na-ion case, fast progresses are expected as a result of chemical similarities with lithium and the cumulated Li-ion battery know-how over the years, for Ca and Mg the situation is radically different. On the one hand, the possibility to use Ca or Mg metal anodes would bring a breakthrough in terms of energy density; on the other, development of suitable electrolytes and cathodes with efficient multivalent ion migration are bottlenecks to overcome.