European companies and inventors file more patent applications in 2018. CSIC is number one in Spain.

The CSIC leads in solitary the international patents requested in Spain, according to the annual report 2018 of the European Patent Office (EPO). The institution leads the classification with 61 patent applications in 2018. 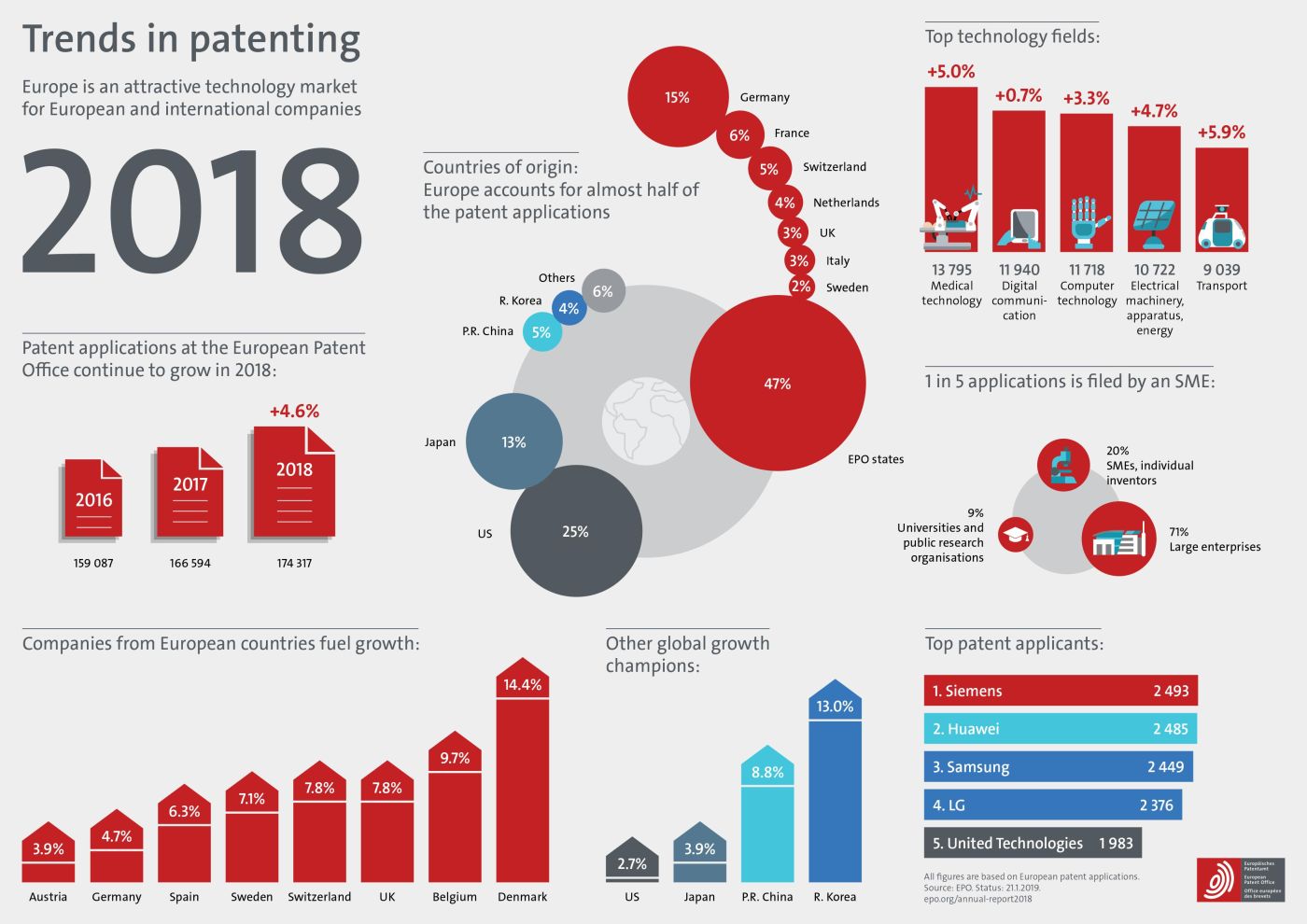 The CSIC leads the classification with 61 applications and almost doubles the second applicant, the pharmaceutical group Esteve, which has 33; followed by the Tecnalia Research & Innovation Foundation and the University of Barcelona (both with 17), Repsol (16), Telefónica (14), the Autonomous University of Barcelona and the Institute of Photonic Sciences (both with 13). In this list, the contribution of universities and public research centers to European patent applications of Spanish origin has increased: five of the first eight are scientific or research organizations. 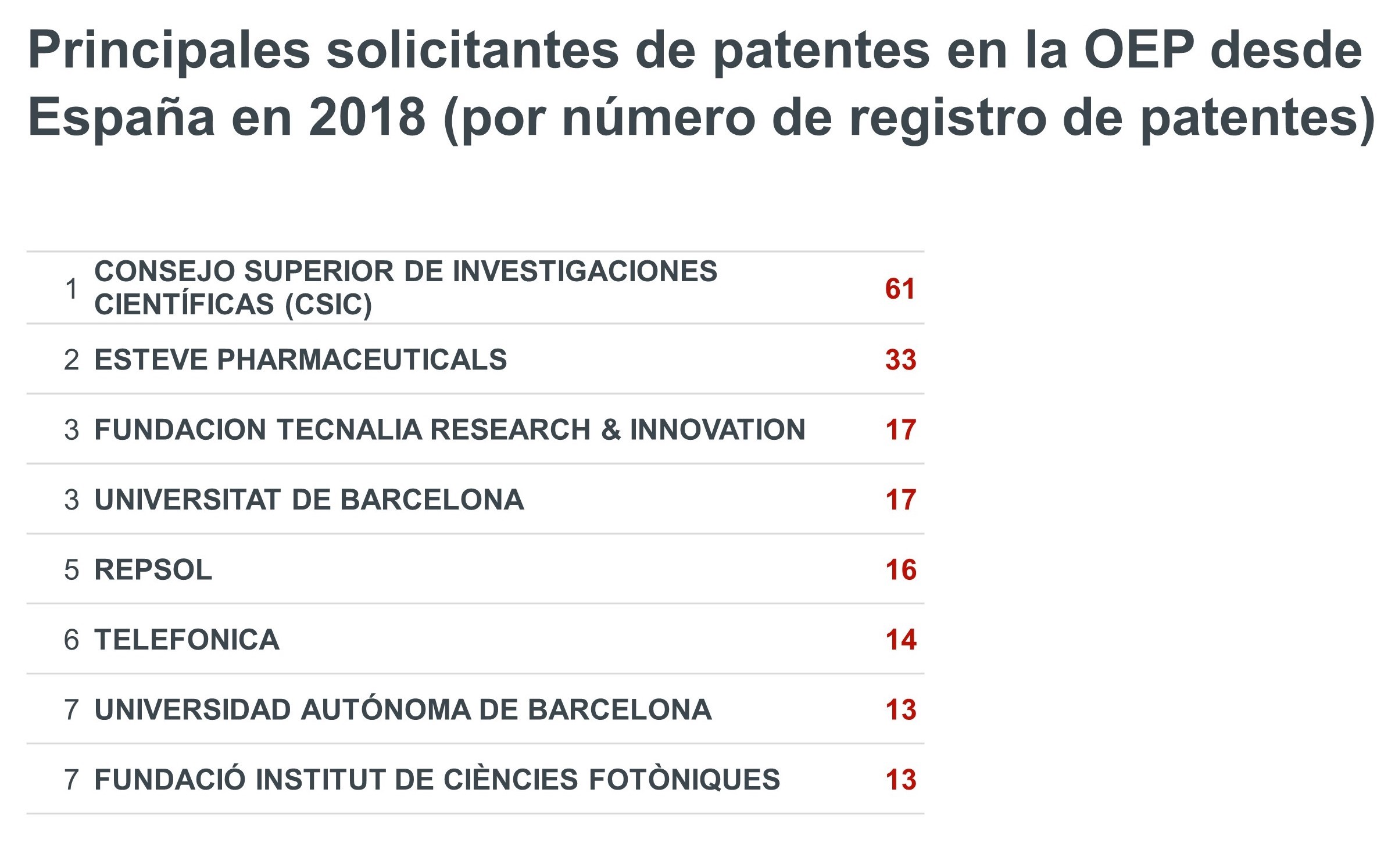 The number of patent applications filed with the European Patent Office (EPO) grew by 4.6% last year, reaching a new high of 174 317 (2017: 166 594) (Fig.: Growth of European patent applications). The EPO’s Annual Report for 2018 shows an increase in patents filed from all major industrial regions but European companies maintained the lead in their home market, with 47% of all patent applications at the EPO originating from the 38 EPO member states. Asian companies also held their ground, with the combined share of China, Japan and the Republic of Korea rising moderately to 22.6% (2017: 22.1%). The US remained

the top country of origin, accounting for 25% of total filings, followed by Germany, Japan, France and China. Thanks to its highly dedicated staff and the combined effect of recent measures to improve the patent-grant process, the EPO published
127 625 granted European patents (+21%) in 2018.

“This year’s annual results are good news for the European economy: Demand for patent protection continues to grow, which means inventors and businesses see Europe as an attractive and valuable technology market to innovate and invest,” said EPO President António Campinos. “Europe therefore needs a competitive and robust patent system, especially given that in the EU, IP-intensive industries account for around 38% of jobs, 42% of GDP and 90% of external trade. The patent system helps businesses build a strong technology portfolio to boost economic growth.”

Companies from the EPO member states filed 3.8% more European patent applications in 2018, their strongest growth since 2010. Indeed, European companies accounted for almost 40% of the overall growth in filings – more than China, Japan and the Republic of Korea combined.

Applications from China rose by 8.8%, their lowest rate in the past five years. This was mainly attributable to slower growth in some of the country’s most patent-intensive fields, including computer technology, electrical machinery and energy, and audio-visual technology. US and Japanese companies reported increases of +2.7% and +3.9% respectively in 2018, while the Republic of Korea, boosted by a rise in patent applications in the areas of digital communication, electrical machinery and energy, and computer technology, went up by 13%, reversing its downturn in the previous year (2017: -3.4%).

Notable increases were also seen from countries with lower patent application volumes. For some of these countries, including Singapore (+20.2%), Australia (+16.3%), Russian Federation (+13.4%), Chinese Taipei (+8.9%), Canada (+5.5%) and Israel (+4.9%), the figures continued to climb, confirming that an ever wider range of countries from all regions are making significant use of European patents. 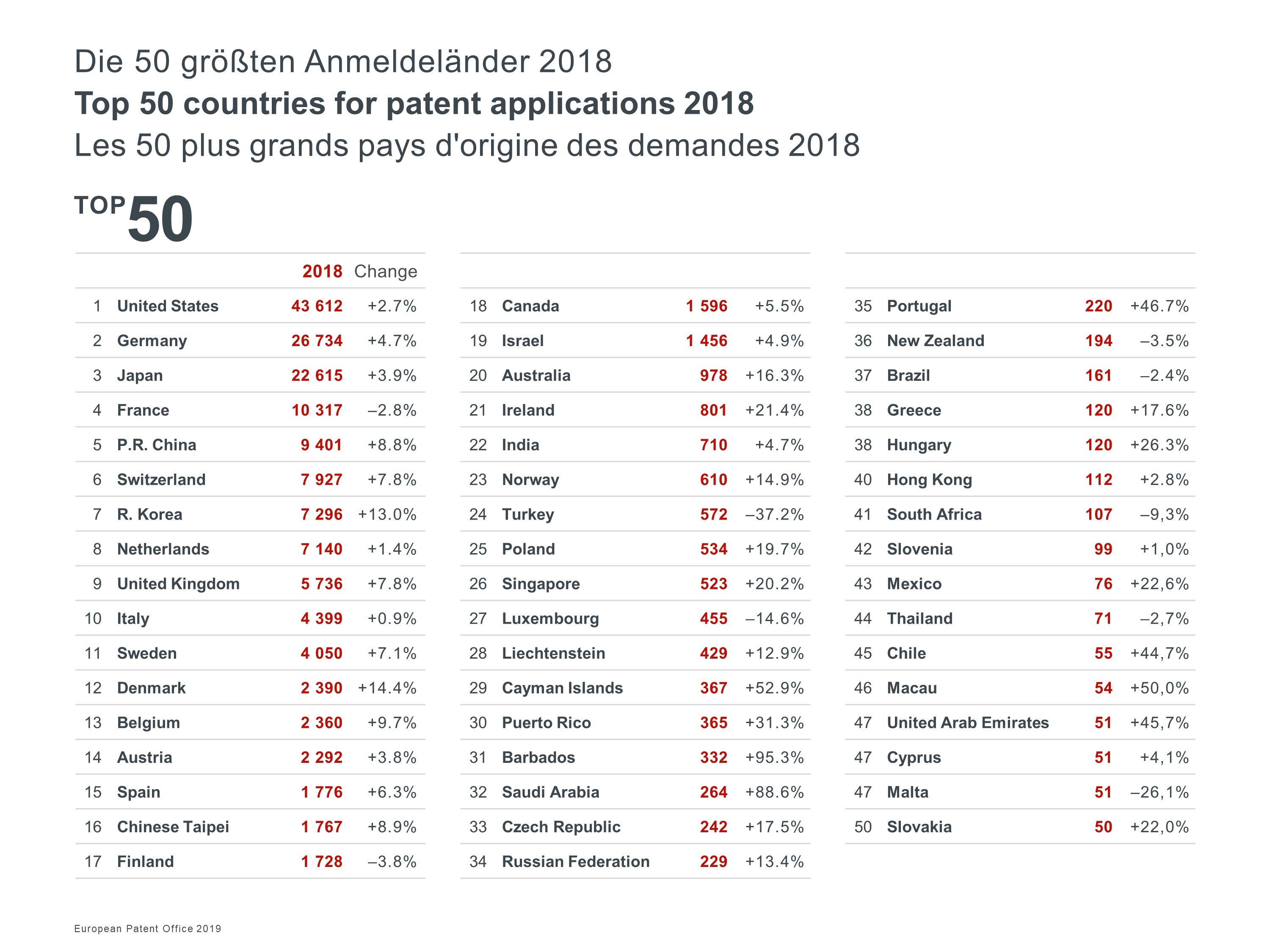 European countries exhibited an overall positive trend, with most of them filing more patent applications at the EPO than in 2017. With the exception of France and Finland, all of the EPO’s top 20 countries of origin posted growth in 2018 (Fig.: Top 50 countries for applications).

Applications from Germany – Europe’s top filing country – increased significantly (+4.7%) to reach 26 734 (approx. 1 200 more than in 2017), their fastest growth since 2010. This was mainly due to an upward trend in the automotive sector and related areas, such as sensors and other measuring devices. Amongst the other countries with high levels of filing activity, applications from Switzerland (+7.8%), the UK (+7.8%), and Sweden (+7.1%) continued to rise solidly, while the Netherlands (+1.4%) and Italy (+0.9%) reached levels similar to the previous year. Declines were reported, however, for France (-2.8%) and Finland (-3.8%): applications from most of France’s ten leading technical fields, especially biotechnology, medical technology and ICT, were down, while applications from Finland fell mostly in digital communication, computers and telecommunications.

There was also very strong growth in European patent applications from a number of countries with smaller patenting volumes. For instance, applications from Ireland grew by 21.4%, largely attributable to greater patenting activity in pharmaceuticals and medical technology, as well as in areas related to smart vehicle technology. Filings from Portugal rose by 46.7% due to large increases in the fields of transport and civil engineering. Applications from Poland (+19.7%), the Czech Republic (+17.5%), and Norway (+14.9%) also grew significantly.

Medical technology remains the technical field in which the most patent applications are filed at the EPO (up 5% in 2018), once again followed by digital communication and computer technology. The strongest growth among the top ten fields was recorded in life sciences, with pharmaceuticals and biotechnology combined growing by 13% (Fig.: Top technical fields at the EPO). 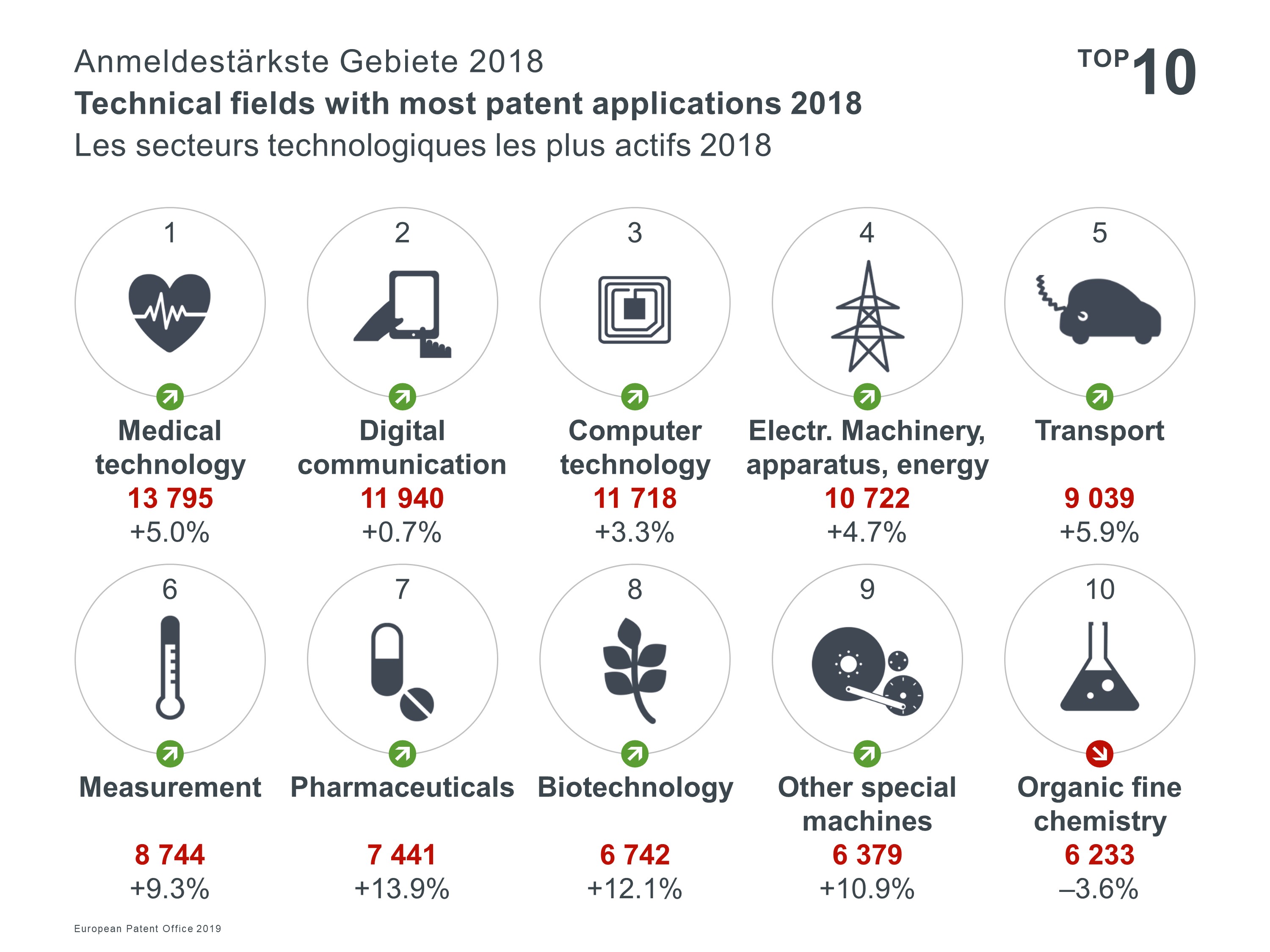 Europeans well positioned in a wide range of technologies

The figures for the top technical fields show that China and the Republic of Korea are growing particularly strongly in ICT, an area in which their industry is highly specialised. Meanwhile, most EPO member states, the US and Japan displayed a greater diversity, filing high numbers of patent applications across several technical fields. Transport – which covers vehicles, aircraft, trains and vessels – was again the field with the largest share of applications (59%) originating from Europe, and seven of the leading ten businesses in transport were European. This also confirms the findings of a recent EPO study on the patent landscape in self-driving vehicles which sees Europe and the US in the lead, each accounting for around a third of all European patent applications since 2011, some way ahead of Japan (13%), the Republic of Korea (7%) and China (3%). The study also found that many of the top 25 patent applicants in the self-driving vehicle sector, including some of the European ones, are not traditional automotive/transport companies but ICT or telecoms firms, and that those traditional companies are exhibiting a growing tendency to behave like ICT firms in their patent application strategies.

Siemens was the top patent applicant at the EPO in 2018 with 2 493 applications (it last headed the ranking in 2011), switching positions with Huawei, which came in second. They were followed by Samsung, LG and United Technologies. The top ten was made up of four companies from Europe, three from the US, two from the Republic of Korea and one from China (Fig.: Top ten applicants at the EPO). 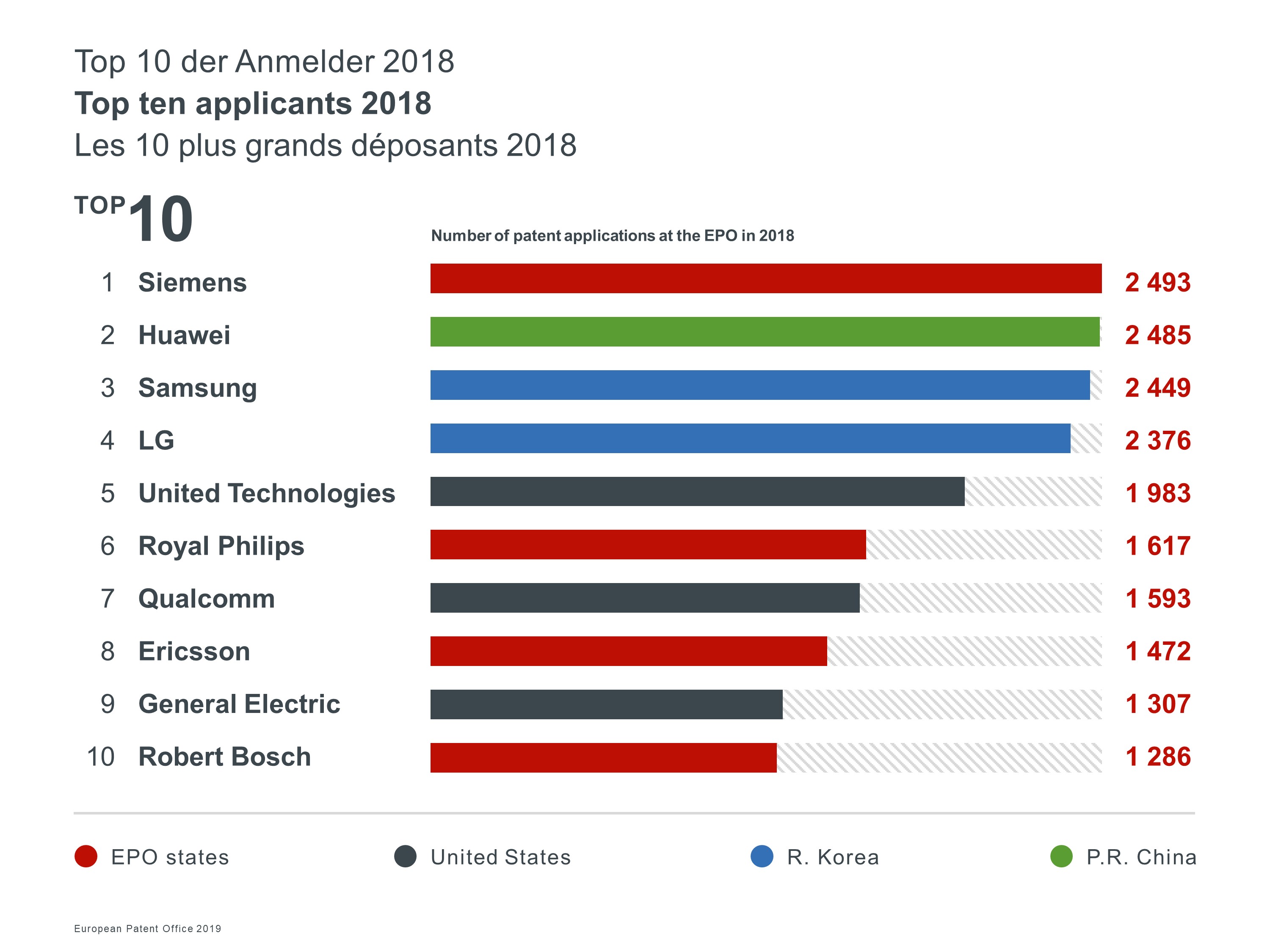 Every fifth application at the EPO filed by an SME

A breakdown of applications originating from European countries shows that 71% of them were filed by large companies, 20% by small and medium-sized enterprises and individual inventors, and 9% by universities and public research organisations.

A breakdown of applications originating from European countries shows that 71% of them were filed by large companies, 20% by small and medium-sized enterprises and individual inventors, and 9% by universities and public research organisations. This confirms that a significant proportion of the EPO’s applicants are smaller entities (Fig.: Breakdown by applicant category).

Thanks to its highly committed staff, the EPO successfully met the growing demand for European patents with a further increase in production. The total number of patent searches, examinations and opposition proceedings carried out by the EPO’s patent examiners went up by a further 3.9% in 2018 (+4.6% in 2017). The combined effects of this increased production, the elimination of backlogs in patent search and changes to working procedures enabled the EPO to publish 127 625 granted European patents in 2018, up 21% on the previous year (+10% in 2017).

For detailed statistics, and a review of our activities in 2018, see the EPO's Annual Report at www.epo.org/annual-report2018.

With nearly 7 000 staff, the European Patent Office (EPO) is one of the largest public service institutions in Europe. Headquartered in Munich with offices in Berlin, Brussels, The Hague and Vienna, the EPO was founded with the aim of strengthening co-operation on patents in Europe. Through the EPO's centralised patent granting procedure, inventors are able to obtain high-quality patent protection in up to 44 countries, covering a market of some 700 million people. The EPO is also the world's leading authority in patent information and patent searching.