The exhibition "Científiques Catalanes 2.0" is this January 2021 at ICMAB

The exhibition about Catalan women scientists, organized by the Catalan Association of Science Communication (ACCC) features M. Rosa Palacin and Anna Roig, both ICMAB researchers, and other 22 relevant scientists in their respective fields. 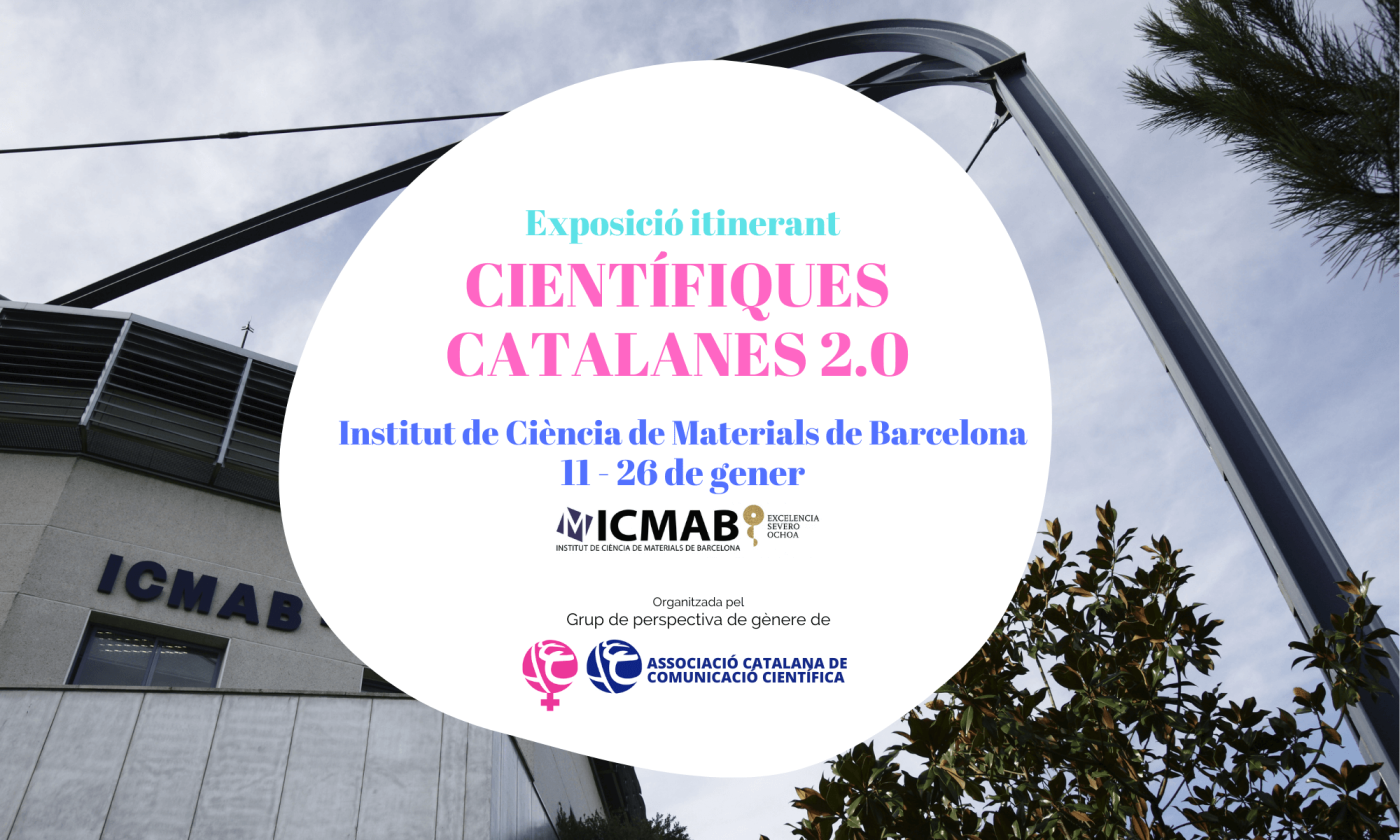 The exhibition "Científiques Catalanes 2.0" (Catalan Women Scientists 2.0), which began its itinerance in February 2020 in Girona, aims to give greater visibility to the strategic role of women scientists in our territory, in order to create and disseminate female roles and models, especially in the fields of science and engineering. It is important to know women in science to help overcome gender stereotypes in STEAM disciplines. Thus, the aim of the exhibition is to highlight the fundamental role of women in the advancement of science in society, highlighting some scientists from our immediate environment, the Catalan territory.

The exhibition, which includes 24 relevant women scientists working in Catalunya, will be at the ICMAB from 11 to 26 January 2020 (2nd floor), and open to everyone willing to visit it. You will find, for example, Gemma Marfany (UB), Licia Verde (ICCUB), Núria Montserrat (IBEC) or Laura Lechuca (ICN2), apart from ICMAB researchers M. Rosa Palacín and Anna Roig. Take a look at some of the photos of the exhibition!

The exhibition was inaugurated in the framework of 11 Feb 2020 (International Day of Women and Girls in Science) at IDIBGI/Museu de l'Aigua de Salt (Girona) and was then at the IEC, at the UVic-UCC and at the ICM-CSIC. Due to the Covid-19 pandemic restrictions, the exhibition could not be shown in all the places that were planned, but the ACCC offers the the content of the exhibition to be downloaded from the same exhibition website and is freely available for any entity and organization who would like to showcast it through their screens, or website.

The project has been coordinated by the ACCC’s Gender Perspective Group, which has more than 20 members, all professionals working in science communication, outreach, and journalism, as well as scientific research.

M. Rosa Palacín is an ICMAB Resarcher on batteries and electrochemistry. She is also the Deputy Director of ICMAB. She is one of the worlds leading experts in next-generation batteries, post-Lithium batteries, and is currently doing research on Calcium, Sodium and Magnesium batteries within the framework of several European projects, such as CARBAT, E-MAGIC or BIG-MAP. She has always done basic research but collaborating with industrial and technological partners, to see the final applications of batteries in electric vehicles or other devices that require energy storage. She participate in many outreach events, roundtables, talks, and in the ICMAB dramatised lecture "Madame Châtelet and her Instagram followers" to visibilize women in science. 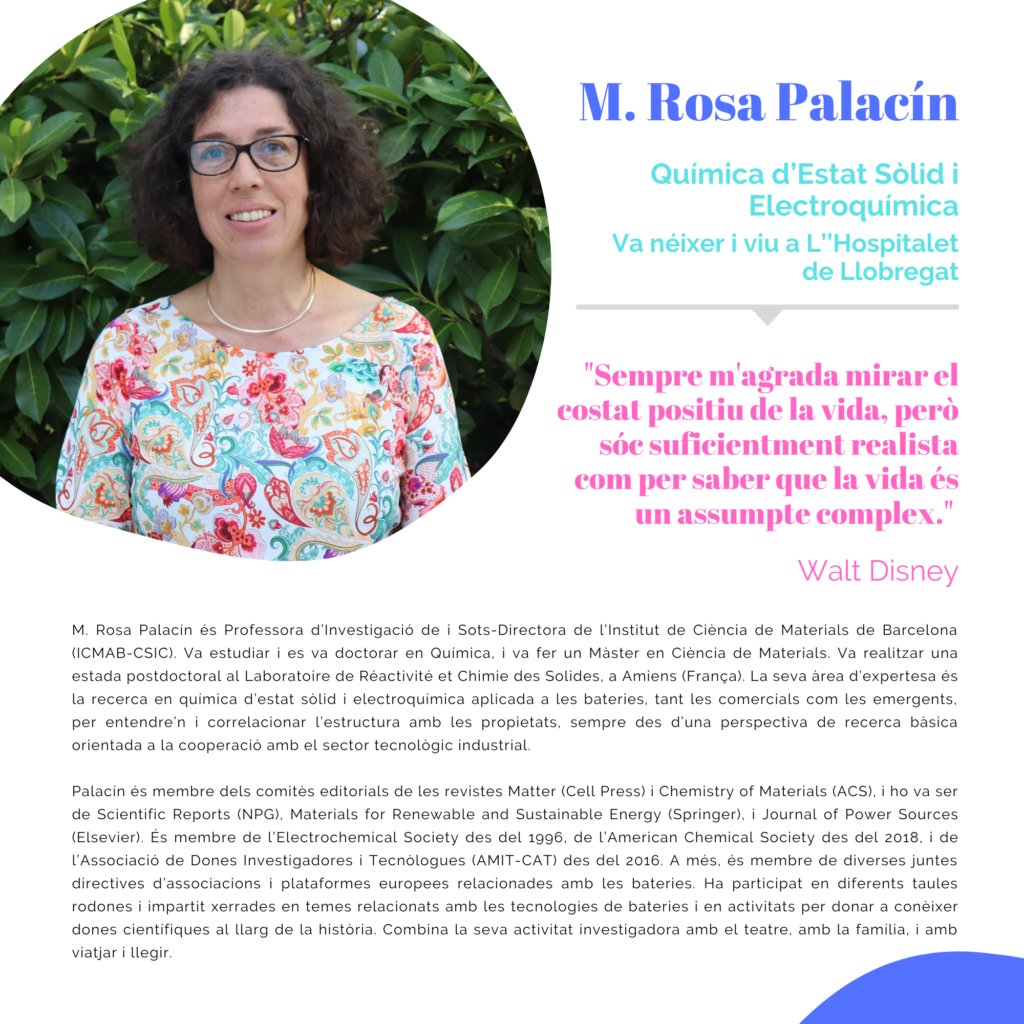 Anna Roig is an ICMAB Researcher on nanoscience and nanotechnology. She focuses on the design and synthesis of different nanomaterials to be applied in nanomedicine, such as magnetic nanocapsules for brain-tissue regeneration after an ICTUS, or nanocomposites made of bacterial cellulose for corneal regeneration. She also likes working with industrial and technological partners, and also to hospitals, to expand the final applications for the basic research. Anna participates in many outreach activities to disseminate nanoscience and nanotechnology, within the 10alamenos9 festival or Nanoinventum, and is also a member of the "Madame Châtelet and her Instagram followers" team. 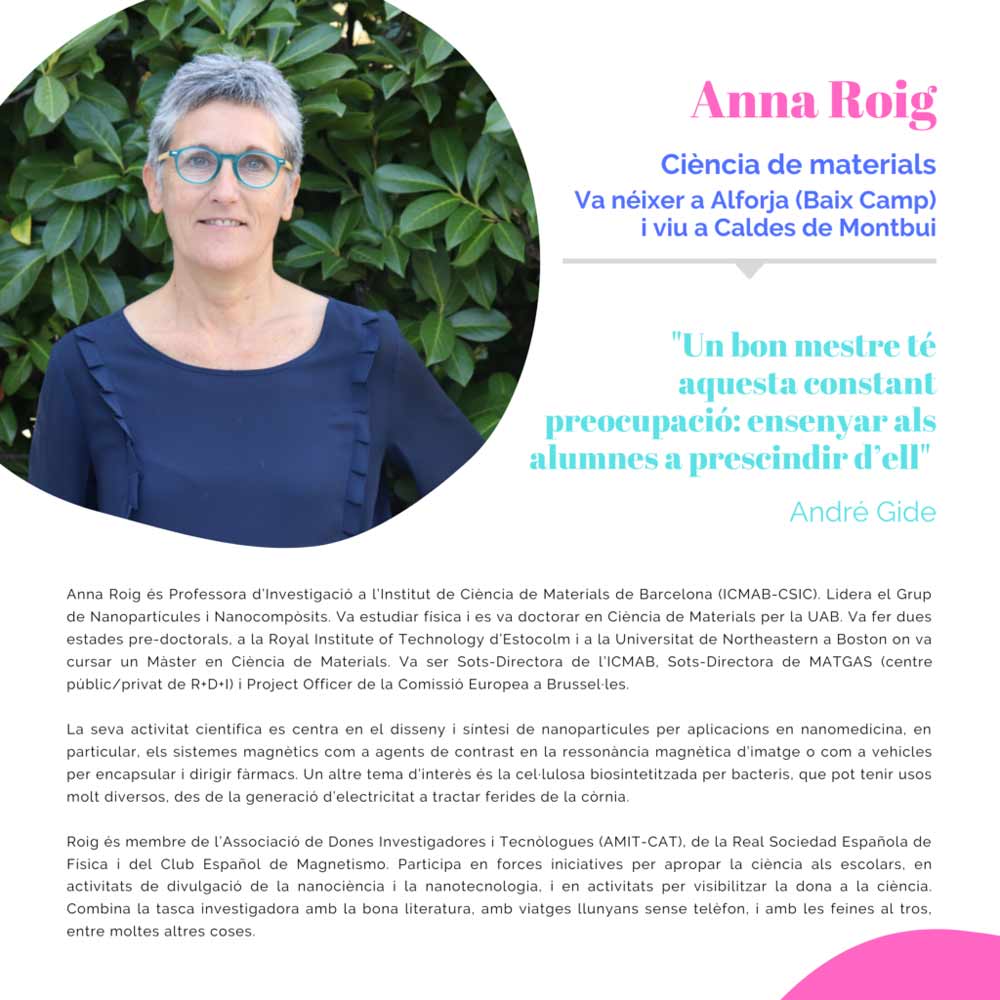 Other activities related to the exhibition

The ACCC also organized, within this exhibition, two workshops on how to edit Wikipedia articles in the Catalan Viquipèdia, and aimed at including the scientits of the exhibition in the digital encyclopedia. For example, you can read here the article about Anna Roig, Rosa Estopà i Bagot or Laura Lechuga, to name a few.

In addition, for the Science Week, an online game was prepared, in which the scientists are the stars of the game. You can play it online here, and see how much you know about them!

During the European Researchers Night (27 Nov 2020), Anna Roig and M. Rosa Palacín also participated in the talks organized for schools and for the general public, together with other scientists of the exhibition and are available on the Youtube channel: "Biomaterials en nanomedicina" by Anna Roig:

And "Bateries del Futur" by M. Rosa Palacín:
In the framework of the European Researcher's Night, the Gender Perspective Group of the ACCC also coordinated the initiative to paint two historical Catalan women scientists, in two high-schools in Catalunya: Elena Maseras i Ribera, first women inscribed in Medicine at the University of Barcelona, was painted in a high-school in Ulldecona, and Maria Assumpció Català i Poch, first women with a PhD in Mathematics from the University of Barcelona, and a passionate on Astronomy. She can be found in a school in the Sant Martí neighborhood in Barcelona.

The Catalan Association of Science Communication (ACCC) is a non-profit association founded in 1990 and formed by professionals and interested in communication, dissemination and scientific journalism with the aim of promoting, disseminating, expanding and improving communication. scientific in Catalan-speaking lands. The ACCC and its projects, which include this exhibition, have the support of the following collaborating entities: Fundació AGBAR, Biocat, Ciment Català, Fundació Catalana per la Recerca i la Innovació (FCRi), La Caixa, Fundació BBVA , Naturgy Foundation and KIMBcn Foundation.