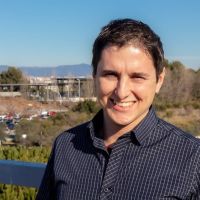 Extension: 436169
Direct phone: 932557369
Email: This email address is being protected from spambots. You need JavaScript enabled to view it.
Department: Magnetic Materials and Functional Oxides

Starting from the very beginning, and focusing on my achievements as an experimental scientist, during my PhD I carried out extensive work designing and developing, in a very independent way, several experimental installations for transport, magneto-transport, dielectric, and ferroelectric characterization. Now, this equipment is included in the list of facilities available at the NFFA (Nanoscience Foundries and Fine Analysis) grouping infrastructures available for industrial or academic research in nanoscience. This intense experimental work carried out at early stages of my career has given me independence for the development of my career and the training required to succeed in the implementation of any materials science related project. As PhD candidate, I developed my expertise on functional characterization of multiferroic systems [1,2]. During my first postdoc position I developed a project on new functionalities and phenomena in multiferroic materials. During my second postdoc. at the Max Planck Institute in Halle (Germany) and after at the University of Warwick (UK), I focused on the spintronic functionalities present in multiferroic systems and antiferromagnetic materials. The success of these projects is reflected in the high impact of the journals where this work was reported, only highlight references 3 and 4 published in Advanced Materials and Nature Communications, respectively. During these two years, I also diversified my expertise working on: growth of materials (metals, semiconductors, insulators and ferroelectrics), lithography techniques (e-beam and UV), photoelectric phenomena, magnetic nanocharacterization, etc. and I mentored three doctoral students. I realized my third postdoc at Catalan Institute of Nanoscience and Nanotechnology. The aim of this third postdoc stage was the realization of a precompetitive device based on ferroelectric materials.

Currently, I occupy a position of researcher at the ICMAB-CSIC focusing my work on two lines of research. The first one, on the electrical control of magnetic order in antiferromagnets in order to be able to develop energy efficient antiferromagnetic based devices [5], and the second one, on the use of photoferroelectrics for sun energy harvesting applications [6]. The first research line has a high degree of internationalization with collaborations with labs in USA and around Europe and merges two of my previous research lines: magnetoelectric coupling and antiferromagnetic spintronics; the second, more at early stages, tries to take advantage of my broad background on ferroelectrics. I sketched my evolution in the bottom figure. Energy saving and production are two of the most important challenges in the nowadays society. Therefore, new materials for energy efficient electronic devices and energy harvesting devices with improved characteristics and novel functionalities are demanded by society and therefore by industry, and both antiferromagnets and photoferroelectrics are potential candidates to meet that demand.

I have presented my work in a large number of international conferences, including lectures and invited talks. Part of my work has also been disseminated in media (TV, radio, newspapers, and magazines). Moreover, I have coordinated the organization of a congress and I have been part of the organization of another. I have also worked with industry (IGSresearch and the Fábrica Nacional de Moneda y Timbre) in different project leaded by myself. I was also co-founder of IGSjump, SMU founded with the aim of building bridges between academia and industry. I supervised PhD and Master thesis, and also mentored several students. I am also devoted to science dissemination, being involved in projects such as ESCOLAB and NANOEDUCA, where young students are introduced to science. I have also been awarded with the First Young Researcher Prize of the XXXVI Biennial Meeting of the Spanish Physics Society for my excellent trajectory.

·         First Young Researcher Prize of the XXXVI Biennial Meeting of the Spanish Physics Society for the excellent trajectory (July 2017).