Session “How the ALBA Synchrotron aids quantum information” at CCCB with, Gervasi Herranz

On Wednesday, 12 June 2019, the Quantum exhibition at CCCB received the visit of three scientists working in Quantum research at the ALBA Synchrotron: Gervasi Herranz, from the ICMAB, Salvador Ferrer, from ALBA, and Jordi Fraxedas, from the ICN2. The three researchers talked to an audience of about 40 people about their quantum experiments at the ALBA synchrotron.

From 10 April until 24 September, the Centre of Contemporary Culture of Barcelona (CCCB) hosts the Quantum exhibition. An exhibition originated at CERN, within the Arts at CERN project, and that the CCCB has completed with a more scientific point of view. The exhitibion, hence, is formed by two routes: an artistic route, with 10 artworks that arise from the interaction between artists and CERN scientists, and a scientific route, which explains the basic principles of quantum physics, and some interactive experiments.

During these months, the CCCB has organized many public lectures, talks, workshops, guided visits... around the Quantum exhibition, to engage the citizens in this world, which is sometimes difficult to understand. As Ricard P. Feynman said “I think I can safely say that nobody understands quantum mechanics.”

On Wednesday, 12 June 2019, around 40 people of different ages and backgrounds gathered at the Beta Station of the Quantum exhibition, which is inside the exhitibition, to listen to Gervasi Herranz (ICMAB), Salvador Ferrer (ALBA) and Jordi Fraxeras (ICN2) and their research.

Salvador Ferrer started by introducing the ALBA Synchrotron and the basics of quantum experiments. The idea is that the photons that arise from the synchrotron light, and the electrons of the materials, interact in a way that depends on their respective spins. With this characteristic, they can investigate the properties of different types of materials, such as magnetic, ferroelectric, etc.

Then, Jordi Fraxedas talked about the water molecule "a discrete molecule", as he announced. It is a simple molecule, but that is fascinating to study and understand! Finally, Gervasi Herranz talked about electrons and photons, and introduced an interesting study of electric conduction at the interface between materials with different crystallographic characteristics.

"How does an electron move in a solid? How does a wave or a particle move? Today, the theory of quantum mechanics describes nature at atomic and sub-atomic scales with an extraordinary degree of perfection. We’ll see how this knowledge can be obtained when we get photons to interact with the electrons of a material in the spectrum of synchrotron radiation X-rays. This journey will help us to understand how quantum mechanics describes the physical reality of the world and how this knowledge can be used for practical applications." - Gervasi Herranz 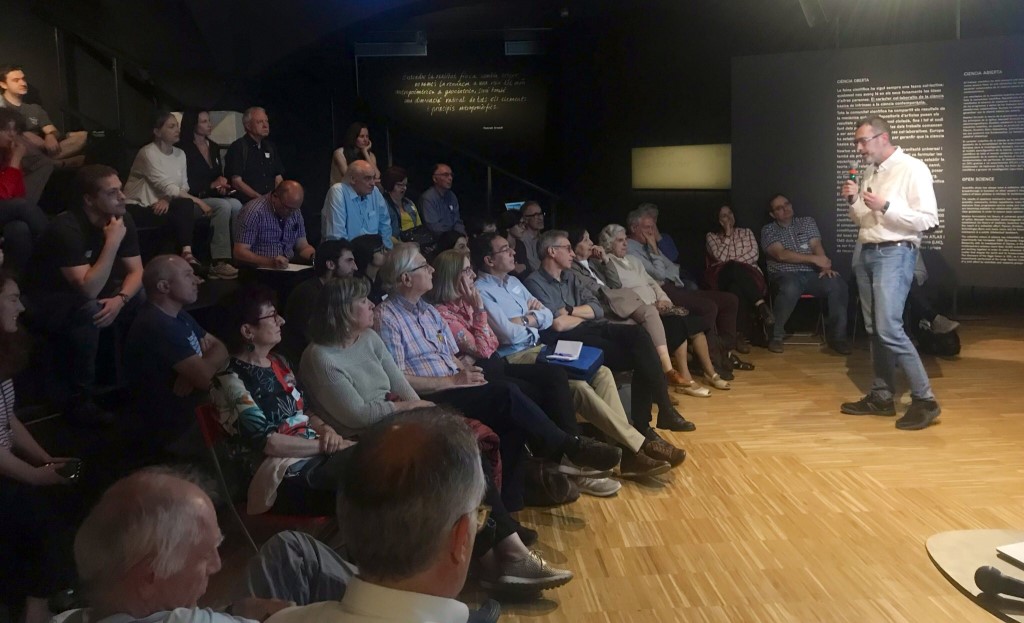