The article and patent related to the preparation of Graphene Oxide Aerogels, using supercritical carbon dioxide, is featured in R+D CSIC, in the news post "Ultralight, elastic and highly porous graphene oxide aerogels".

You can read it here: 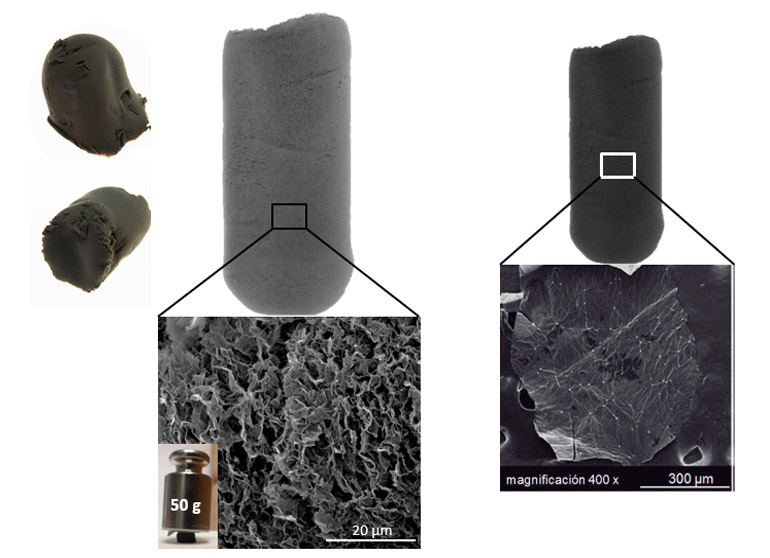 Graphene and its derived materials, which include graphene oxide, are materials with very interesting properties, and whose applications are so relevant that they can be used in fields such as electronics, energy storage, the environment and even in medical technology.

On a general basis, to obtain graphene oxide aerogels, solvents (such as ethanol) are used, in high temperature processes, in order to trigger the desired transformation. However, in most cases, the final product obtained is reduced graphene oxide (rOG), in which many of the oxygenated groups that are expected to be used as ‘hooks’ are lost.

At the CSIC’s Institute of Materials Science of Barcelona (ICMAB), scientists have developed a sustainable method based on the use of supercritical CO2 that does not destroy the material. As a result, the procedure enables the production of ultralight, elastic and highly porous graphene oxide aerogels.The results have been published in the journal Chemistry. A European Journal and patented.Currently, industrial partners are sought for further development.

Ana M. López-Periago, a scientist at the group of “Supercritical fluids and functional materials” of the ICMAB explains that “with supercritical CO2 it is possible to produce at a large scale and in a sustainable way, ultralight graphene oxide sponges. This material has in its structure the oxygenated groups suitable to perform the needed chemical changes à la carte for every type of application”.

“We have obtained aerogels that are approximately the size of a cigarette filter, and weigh just 3 milligrams, what makes them an extraordinarily light material”, says López-Periago.The material is elastic, it recovers its previous shape like a rubber, it is highly porous and has a large surface area (100-250 m2/g). This large surface area also means that there is more space to add functional molecules.

Another advantage of this material with respect to other forms of the compound is that, at the production level, it would prevent to work with graphene oxide or graphene powder. “Working with small pieces of aerogel is much easier and cleaner, and there is less risk of dispersion and contamination than with the powder”, concludes López-Periago.

Graphene oxide aerogels could be used as filters to prevent the emission of harmful gases, in supercapacitors, batteries or in catalysis, among others. Actually, there are a great number of applications, which depend on the type of functional molecules that can be bonded to the aerogel. The ICMAB has just applied for a new FET-OPEN project to develop, together with an industrial partner, one of these possible applications.

Read it here: in CATALAN, in SPANISH, in ENGLISH.

Figure: Aerogel samples, with detail of its structure and mechanical resistance (it can support hundreds of times its own weight)