How do superconducting coated conductors respond to the extreme temperature, frequency and magnetic field conditions of the CERN Future Circular Collider?

A new publication in Scientific Reports by researchers of the Superconducting Materials and Large Scale Nanostructures (SUMAN) group at the ICMAB, the ALBA Synchrotron, the Universitat Politècnica de Catalunya (UPC) and CERN, has studied the surface resistance and vortex properties of seven superconducting coated conductors at microwave frequencies, high magnetic fields and low temperatures (mimicking the expected conditions of the Future Circular Collider at CERN) to study how they respond.

Highly conductive coatings to stabilize the proton beams at the FCC

Under the umbrella of CERN´s Future Circular Collider (FCC) study, more than 100 institutes, among them, the ICMAB, assess the feasibility of building a next generation, high energy circular collider as the successor to the Large Hadron Collider (LHC). New energy frontiers have to be explored in order to disentangle tantalizing mysteries of the universe related to dark matter or supersymmetry.

However, the collision energies of the proposed particle accelerator, targeted to exceed the LHC by a factor of seven, come at a price. It is a huge challenge to guarantee a stable proton beam at such high energies due to wakefields. They result from mirror charges that are introduced into the surroundings of the protons. Highly conductive coatings within the beam screen chamber, which houses the beam, can offer a solution to the problem.

In this context, it was suggested to evaluate high temperature superconductors as a beam screen coating candidate. The integral property for a beam screen coating is a low surface impedance at the expected extreme FCC-hh conditions, i.e. at a temperature of 50 K, 1 GHz accelerator frequency and up to 16 T of magnetic field. The overall surface resistance at these conditions will be governed by the magnetic field term. For that purpose, it is mandatory to understand the behavior of magnetic vortices in high-temperature superconducting coated conductors at the mentioned conditions.

In this manuscript, published now in Scientific Reports, researchers disclose the surface resistance of seven commercially, in large scales available, REBa2Cu3O7-x (RE = Rare Earth) coated conductors at 8 GHz, 20-70 K and up to 9 T measured by a Hakki-Coleman dielectric resonator. Researchers show how different microstructures of REBa2Cu3O7-x coated conductors, which depend on tunable growth conditions and nano additions used by manufacturer, result in quite a wide variety of surface impedances and vortex parameters.

By modelling the field behavior of the surface resistance, we contribute to the understanding of vortex pinning properties at high frequencies in thick REBa2Cu3O7-x films. We give frequency limits for the low dissipative pinning regime and highlight explicit links between microstructure, superconducting properties and vortex parameters. Finally, estimations of the surface impedance for each coated conductor are made based on extracted vortex parameters for expected FCC-hh conditions.

These calculations suggest surface resistances up to 70 times smaller than displayed by copper, which is the material used as a beam screen coating in the LHC. Expected margins in surface resistance of REBa2Cu3O7-x coated conductors can enable more efficient and sustainable FCC-hh options and eventually tip the scales in the realization decisions for CERN’s future infrastructure. 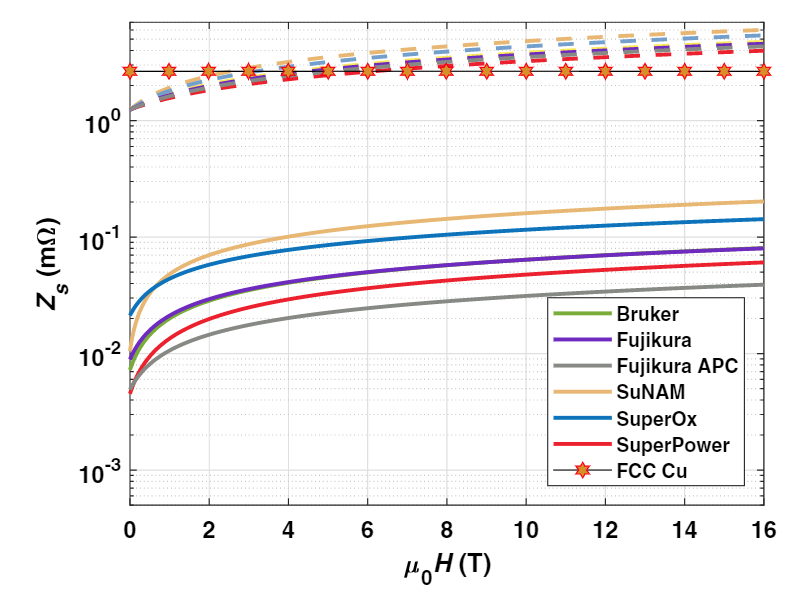 Our study also carries interesting implications for the field of microwave applications and materials science. On the one hand, the generated surface resistance data demonstrates the strong high frequency in-field performance of commercially available coated conductor technologies and thus underlines the maturity to be employed in microwave applications where large magnetic fields are imperative (like in the detection of axions in dark matter search ).

On the other hand, the demonstrated correlation between microstructure and vortex parameters can pave a route for production optimization of REBa2Cu3O7-x coated conductors in search of a sweet spot between cost efficiency and necessary microwave performance to meet the demands of specific applications.

The publication is a collaboration between researchers from the Institute of Materials Science of Barcelona (ICMAB, CSIC), the ALBA Synchrotron, the Universitat Politècnica de Catalunya (UPC) and CERN.

Cover Image: The scale of the FCC-hh as compared to the already existing Large Hadron Collider (LHC)

*Article written by Artur Romanov, PhD fellow at the SUMAN group, and first author of the paper in Scientific Reports.