ICMAB researchers Gervasi Herranz, Blai Casals and Rafael Cichelero, from the MULFOX group, have contributed to a study led by the group of Manuel Bibes, from Unité Mixte de Physique CNRS/Thales (France), published in Nature Physics on October 15, 2018. The study, entitled "Giant topological Hall effect in correlated oxide thin films" describes the discovery of a giant topological Hall effect arising from the topology of spatial distribution of spin textures.

What is the Hall effect? 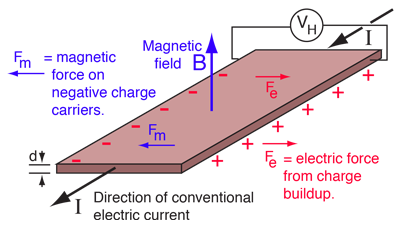 Gervasi explains us the main points of this study: "When electrons travel across nontrivial spin distributions, they feel an effective emergent magnetic field (which is perpendicular to the direction of the current) due to the Berry phase acquired by electrons. Therefore, it is a phenomenon that does not occur for any spin distribution, but requires a specific topology.This emergent magnetic field gives rise to a transverse voltage (like in the conventional Hall effect), which could be used in potential applications, since these spin distributions are protected by their topology and are more robust against fluctuations and noise.This work is important because the observed topological Hall effect is unusually large (giant!), and because this Hall effect is strongly dependent on carrier concentration in the material, which can be used to control it using electric fields, opening new prospects for potential applications."

The contribution of the ICMAB researchers has been in using magneto-optics to measure the topological Hall effect produced due to the geometric distribution of the spins.