Press Release: Lead halide perovskites are not ferroelectric: further research is needed to discover why they are so good for solar cells

In a solar cell, when the sunlight impacts the material, a charge is generated. Specifically, this charge corresponds to an electron-hole pair, where an electron is excited to the conduction band, leaving a hole in the valence band. For the cells to be efficient, this pair of charges has to be separated and extracted as efficiently as possible (electron and hole must be directed to opposite electrodes to be captured) to generate an electric current. This is where ferroelectricity comes into play: this property would generate a built-in electric field in the material that could assist charge separation.

In the particular case of lead halide perovskites, ferroelectricity could help to understand why they work so well as active material in solar cells, and in fact, that was a plausible explanation so far. However, the study published in Energy & Environmental Science by researchers from the Institute of Materials Science of Barcelona (ICMAB-CSIC) and the Helmholtz-Zentrum Berlin für Materialien und Energie (Germany) demonstrate, for the first time, that the fact that these materials are optimal for solar cells is not due to ferroelectricity. "This work is very interesting for understanding  why these cells are so efficient," says Andrés Gómez, researcher at the ICMAB-CSIC and first author of the article. We will have to keep looking for the final answer. 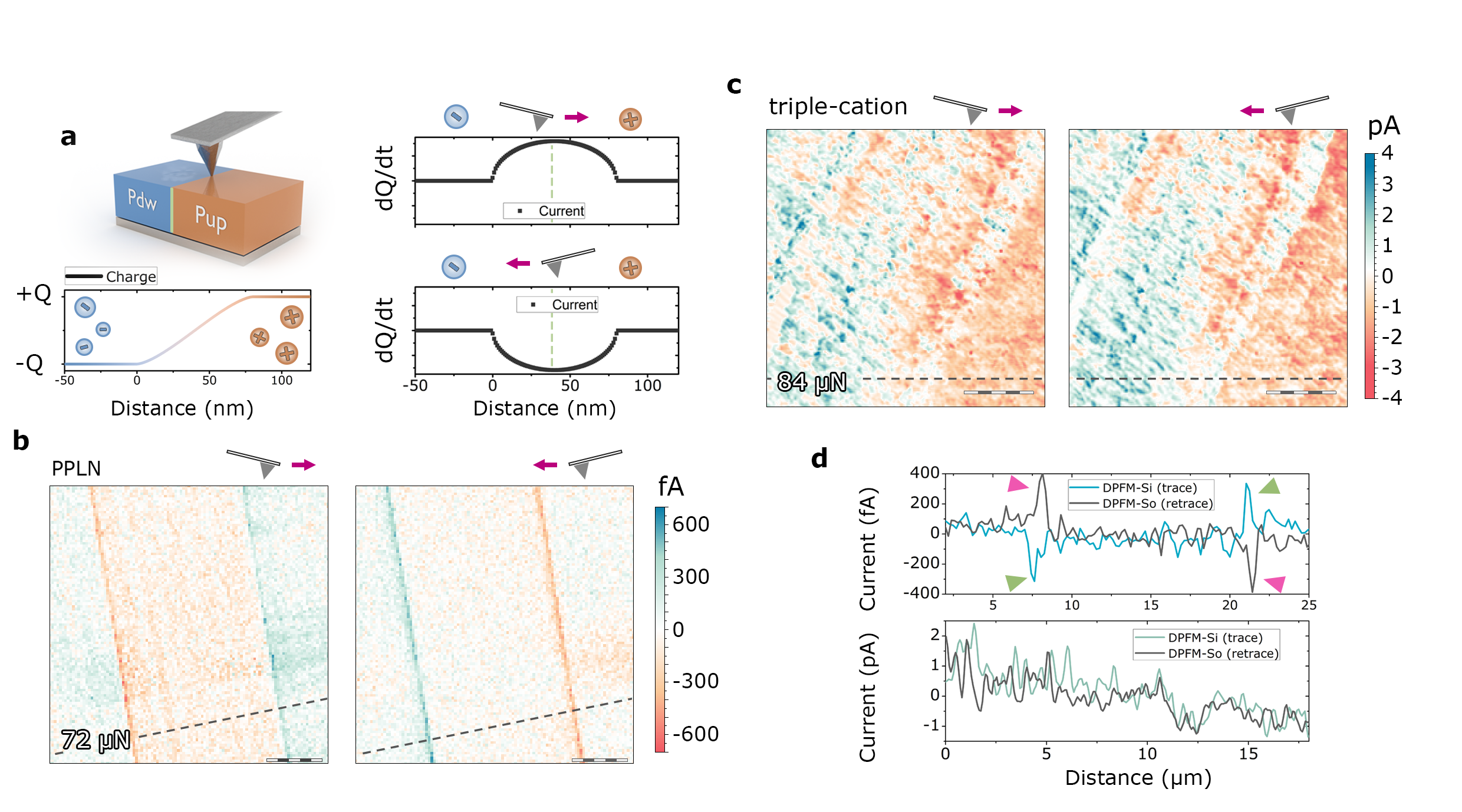 Figure 1: Scan direction dependence of the DPFM signals. (a) Scheme of the DPFM measurement of a ferroelectric sample (top left panel), with an antiparallel domain configuration, in which “Pdw” stands for “polarisation down” and “Pup” for “polarisation up”. Upon application of a suitable mechanical load, a negative charge is built up by the piezoelectric effect on the left side while a positive charge is built up at the right side (bottom left panel). The signal recorded, that is the current, is the derivative of the charge and it reverses its sign when the tip crosses different domains, depending upon the scan direction: the tip going from left to right (top right panel) and from right to left (bottom right panel). (b) DPFM images obtained for periodically poled lithium niobate (PPLN) with an antiparallel domain configuration. Scale bar: 5 μm. For PPLN, the current sign is reversed as the scan direction changes, exactly as expected for a ferroelectric domain structure. (c) DPFM images of the CsFAMA perovskite scanned under similar conditions to those of PPLN. Scale bar: 5 μm. The CsFAMA perovskite does not show a sign reversal of the DPFM signal, but rather the images for the two scan directions (left and right panels) are quite similar, which resemble typical current-sensing AFM mapping. (d) Random profiles extracted from PPLN (top panel) and the CsFAMA perovskite (bottom panel).

The secret: the new technique used

However, the DPFM technique, introduced in 2017 at the ICMAB-CSIC, complementary to PFM, measures the piezoelectric effect in a direct way and allows to clearly discern if a sample is ferroelectric or not. The technique does not produce spurious signals, since it excludes many measuring artefacts because via the piezoelectric effect  a mechanical energy is directly converted into electrical energy in a strictly proportional way. This fact is fundamental to be able to examine the existence of ferroelectricity in lead halide perovskites, an issue that has been under debate for several years.

For this study, polycrystalline samples of lead halide perovskites and samples of other materials with known ferroelectricity used as control were analyzed, and experiments were conducted with perovskites with different properties (grain size, layer thickness, different substrates, different textures...) using PFM and DPFM, and even EFM (electrostatic force microscopy).

This is the first time that the DPFM technique is used in lead halide perovskite solar cells. "No other research group has been able, with nanometer-scale resolution, to elucidate whether these cells are really ferroelectric or not," says Gómez. Now we know.

Figure Cover: We use the sun cream to indicate the "Ferroelectricity free" perovskites. The percentage is the efficiency of the perovskites, and the acronym is the type of perovskites. The crystal structure of each perovskite is represented.

Download the PRESS RELEASE in CATALAN, SPANISH and ENGLISH here.