The PhD researcher Miquel Nuez Martínez from the Inorganic Materials & Catalysis (LMI) group at ICMAB-CSIC, will defend his PhD thesis on Friday, 25 November 2022 at 10:30 am at UAB

These interactions were also observed in vitro at ALBA synchrotron; and in vivo, using C.elegans, which helped with their later application as drugs for cancer multitherapies: chemo-, radiotherapy and boron exclusive BNCT and PBFR, which was tested for the first time. Metallabis(dicarbollides) were also successful acting as small molecule drugs against resistant bacteria and yeasts.

Finally, seeing the improvement provided by doping PEDOT with cobaltabis(dicarbollide), its use as catalyst for water oxidation has been proposed. 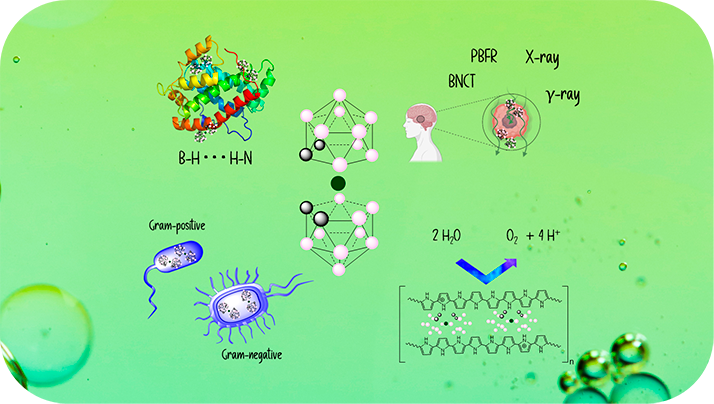 Scheme of a metallabis(dicarbollide) and their applications in that thesis: biomolecule interaction, anticancer multitherapies, as antibiotics and as dopant for COPs for green catalysis. | Miqul Nuez, ICMAB, CSIC