New Inside Cover in the Journal of Materials C for the article "Conducting chiral nickel(II) bis(dithiolene) complexes: structural and electron transport modulation with the charge and the number of stereogenic centres".

Cover for "Conducting chiral nickel(ii) bis(dithiolene) complexes: structural and electron transport modulation with the charge and the number of stereogenic centres"

“This work represents the more complete characterization of a large series of metal bis(dithiolene) conducting molecular solids. The rationalization of the reported results concerning the influence of pressure and the number of stereogenic centers gives important hints on how to progress in the search for chiral molecular superconductors.” – Enric Canadell

ICMAB Researcher Enric Canadell from the Electronic Structure of Materials (LEEM) Group is one of the authors of this article, that showcases the synthesis and characterization of the first series of chiral nickel bis(dithiolene) complexes that show modulation of their conducting properties through the number of stereogenic centers, which exhibit a strong conductivity increase under pressure. 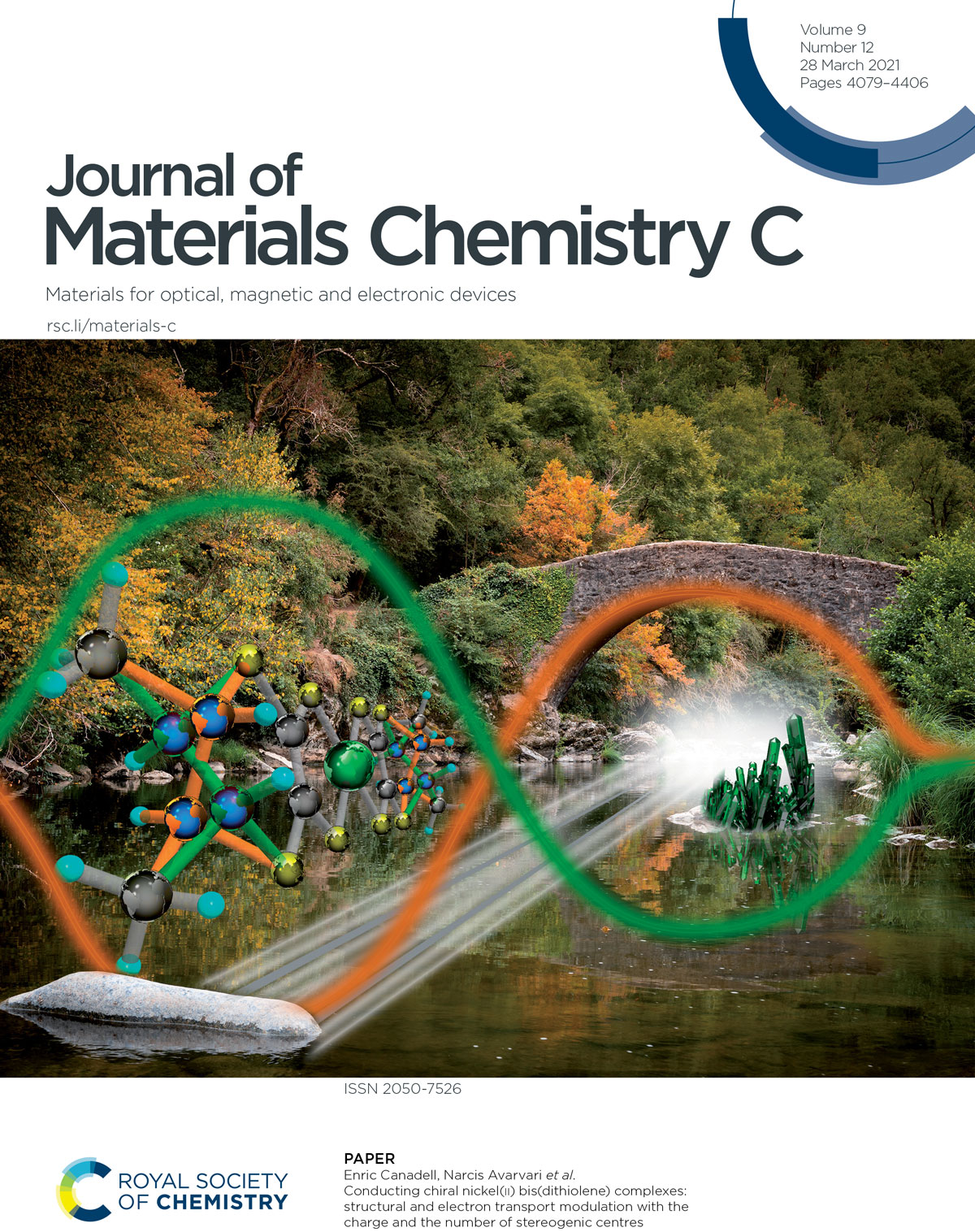 Inside Cover in the Journal of Materials C for the article " Conducting chiral nickel(II) bis(dithiolene) complexes: structural and electron transport modulation with the charge and the number of stereogenic centres".

“The green and orange curves are the calculated circular dicroism spectra of the complex shown in perspective, when the chiral substituent is in the conformation (axial or equatorial) drawn in green or orange, respectively.  What the picture means is that the conformation and degree of purity of the complexes with the chiral center within the conducting solid can be determined recording such spectra. Eventually X-ray diffraction will confirm the assignment”, says Enric Canadell.

These results present a big step forward for a field that is still in its infancy, due to “the difficulty to produce and characterize pure enough enantiomeric or racemic conducting salts.” This article, however, showcases this is possible for an important class of molecular conductors, pushing the research in chirality forward:

“Previous work of the same authors gave evidence of the influence of chirality on the electronic transport through the first observation of the magnetochiral anisotropy effect in a series of molecular conducting metals. The ultimate step in this research is the investigation of the chirality-conductivity relationship in a molecular superconductor. Since metal bis(dithiolene) complexes have afforded different superconducting salts, the ability to prepare conducting solids of pure enantiomeric and racemic complexes of this family is an important step forward in the long quest of a chiral molecular superconductor.”

Abstract of the paper:

Nickel(II) bis(dithiolene) complexes can provide crystalline conducting materials either in their monoanionic or neutral forms. Here we show that the use of chiral dithiolene ligands with one or two stereogenic centres, together with variation of the counter-ion in the anionic complexes, represents a powerful strategy to modulate the conducting properties of such molecular materials.

The chiral ligands 5-methyl-5,6-dihydro-1,4-dithiin-2,3-dithiolate (me-dddt) and 5,6-dimethyl-5,6-dihydro-1,4-dithiin-2,3-dithiolate (dm-dddt) have been generated from the thione precursors 1 and 2 which have been structurally and chiroptically characterized. Anionic Ni(II) complexes of these two ligands with tetrabutyl-ammonium (TBA) and tetramethyl-ammonium (TMA) have been prepared and structurally characterized, suggesting that it is the nature of the counter-ion which mostly influences the solid state organization of the complexes.

Both TBA and TMA radical anion salts are Mott insulators with antiferromagnetic ground state, as suggested by spin polarized DFT band structure calculations. However, the TMA salts are one order of magnitude more conducting than the TBA counterparts. The neutral materials [Ni(me-dddt)2] and [Ni(dm-dddt)2] are direct band gap semiconductors, as determined by DFT and extended Hückel band structure calculations, with their conductivity drastically increased up to 0.05–3.3 S cm−1 under the highest applied pressures of 10–11 GPa.

At equivalent applied pressures the dm-dddt materials are more conducting than the me-dddt ones, in agreement with the lower calculated activation energy and larger bands dispersion for the former. This trend follows the structural change when going from one to two methyl substituents, since the packing and intermolecular interactions are completely different between [Ni(dm-dddt)2] and [Ni(me-dddt)2], the packing of the latter being related to the one of the achiral parent [Ni(dddt)2].

Subtle differences of conductivity are also observed within both series of neutral complexes between the enantiopure and racemic forms. This represents the first series of chiral nickel bis(dithiolene) complexes which shows modulation of the conducting properties with the number of stereogenic centres, the conductivity, measured on single crystals, strongly increasing upon applying hydrostatic pressure.