A route to control the conductivity in the functional oxide Er(Mn,Ti)O3 through the use of Atomic Force Microscopy (AFM) could allow for an improvement of conductivity that is not detrimental to other materials’ properties like magnetism or multiferroicity, as demonstrated in a new Nature Materials article that counts with the collaboration of ICMAB Researcher Konstantin Shapovalov from the Electronic Structure of Materials (LEEM) Group.

Konstantin Shapovalov, from the Electronic Structure of Materials (LEEM) Group, explains the core concept behind the Nature Materials article “Conductivity control via minimally invasive anti-Frenkel defects in a functional oxide”, developed in collaboration with researchers at the Norwegian University of Science and Technology: it’s a demonstration of “a simple way for a local control of the conductivity of Er(Mn,Ti)O3 by electric field. By using nothing more than an AFM tip we can write conducting wires of various shapes on the surface of the material with a nanoscale precision”.

These wires are created by applying an electric field in the functional oxide hexagonal Er(Mn,Ti)O3 which creates defects in the material that act like acceptors. Since this compound has a p-type conductivity, an increase of acceptors means an increase of conductivity.

The origin of the defects is a key element that deeply affects the results achieved. "Usually, such defects are brought in from the atmosphere: for example oxygen vacancies and oxygen interstitials can be responsible for the increased conductivity in various similar functional oxides. But bringing them from atmosphere changes the material's stoichiometry, and there is a big risk that by gaining conductivity we lose other intrinsic functionalities such as magnetic or electric order and generate potentially undesired chemical, electrostatic and strain-related gradients”.

This team has achieved a way to increase the conductivity of Er(Mn,Ti)O3 without affecting its stoichiometry: through the use of electric fields, they generate anti-Frenkel defects (oxygen vacancy - oxygen interstitial pairs) with nanoscale spatial precision, which dramatically increase electronic hopping conductivity but do not have an affect on the compound’s ferroelectric order.

The result are nanowires that are “several orders of magnitude more conducting than the surrounding areas, and their high conductivity is retained for years”.

Their results are supported by exhaustive experimental testing, as well as theoretical studies of diffusion, drift and recombination of the defects conducted by ICMAB Researcher Konstantin Shapovalov, who showed that “the observed features are only possible when there are defects of not one but at least of two types coexisting in the material”.

Their results are really promising: “We hope that this mechanism of writing nanoscale conducting regions while preserving the material's stoichiometry can be easily expanded to other systems, allowing for a multilevel conductivity control used in parallel with phenomena such as ferroelectricity, magnetism and superconductivity without changing the electronic interactions that control them”. 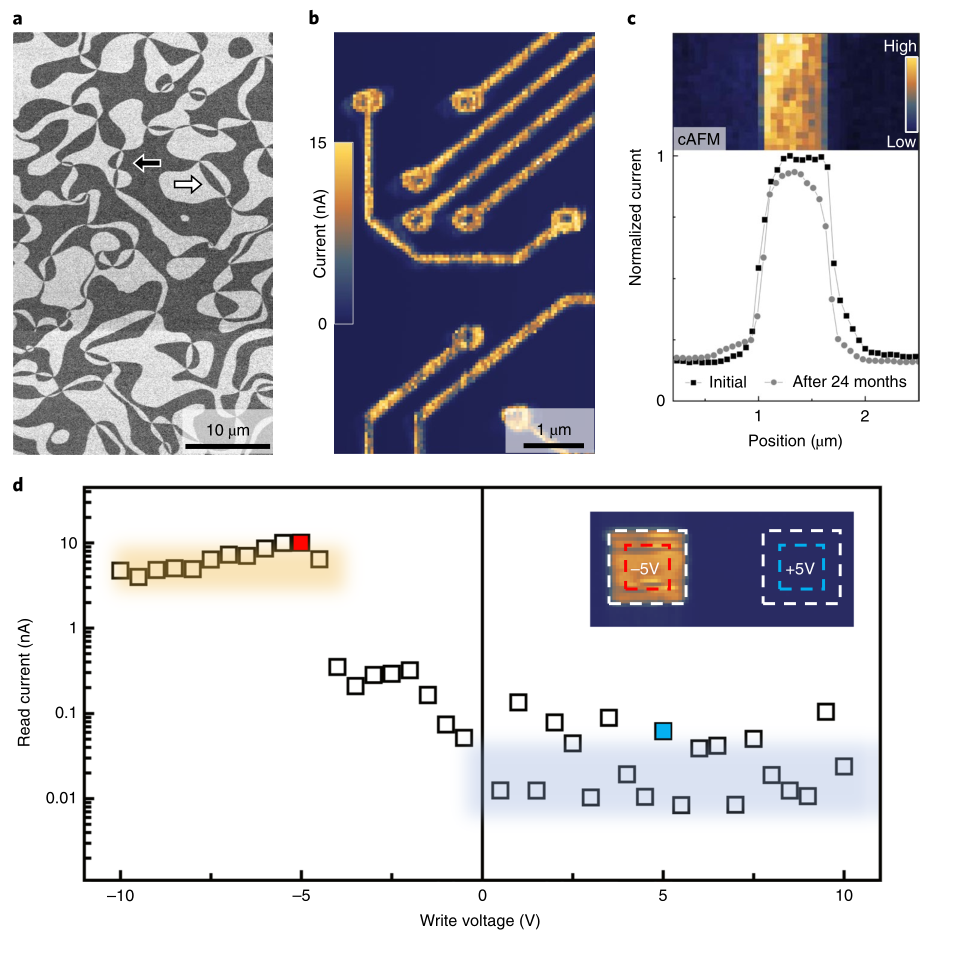 Figure: Figure 1 of the article in Nature Materials.