The meeting, held as part of the European H2020 project LeTSGEPs, was organized by the ICM (Institut de Ciències del Mar) in coordination with the CSIC Equality Committee and the CSIC Women and Science Committee. The ICMAB was present in the event to explain our experience in Gender Equality, after receiving the Equality Distinction in 2018, and to share and learn good practices in Gender Equality.

The event, which brought together over 100 professionals from 30 CSIC centers, including ICMAB, was held on Thursday, 10 December, within the framework of the European Project Leading Towards Sustainable Gender Equality Plans in Research Institutions (LeTSGEPs). This project aims to implement Gender Equality Plans (GEP) with the integration of the gender budget approach (GB) in the research centers and universities of the consortium, which ICM belong to.

The CSIC president, Rosa Menéndez, opened the event and stated that “CSIC is firmly committed to achieving equality in all areas of its research, administrative and technical staff".

The president also stressed that the work of the CSIC Women and Science Committee, since it was created in 2002, "has been remarkable” and led to the decrease of the glass ceiling index, as a measure of gender imbalances, from 2.33 to 1.35 at present.

In this sense, Menéndez pointed out that since 2013, after the first CSIC Equality Plan was approved followed by a second plan in 2015, an evaluation report has been made yearly. She has also added that in 2018, CSIC introduced the Gender Equality Distinction, which is now in its 3rd edition. However, "we must continue to work more and with more effort", concluded Menéndez.

Josép Lluís Pelegrí, the director of ICM, recently Severo Ochoa Excellence Center, has mentioned the work carried out at the Institute in the area of gender equality: “ICM aspires to be a research center that encourages collaboration in all areas. A collaboration from and for equality, especially gender equality, cooperation that is enriched by complementarities and that accepts differences without imposing hierarchies”. 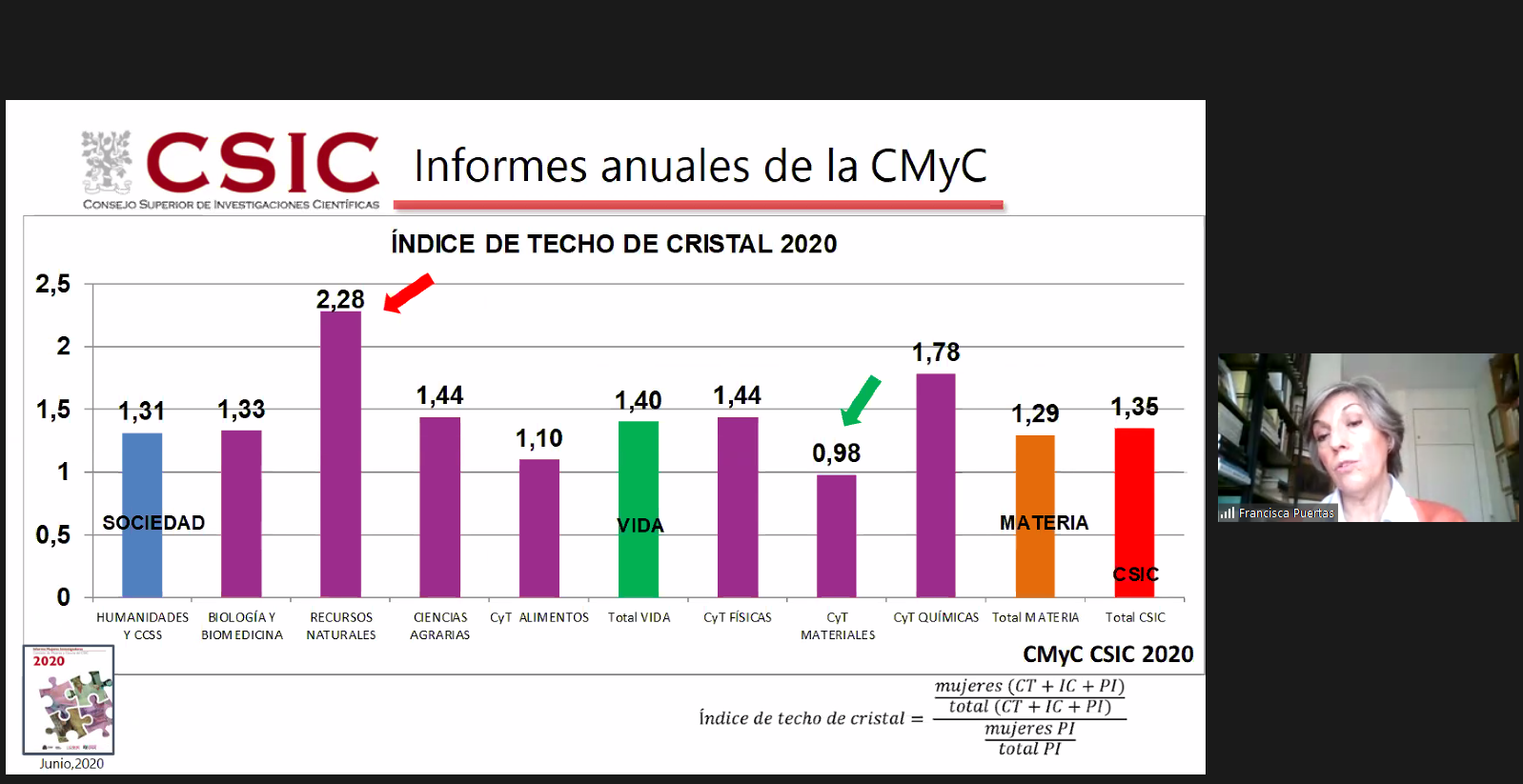 Francisca Puertas presenting some of the data of the Annual Report 2020 of the Women and Science Committee, CMyC).

An interesting point to highlilght is the glass ceiling index for women, which is 1.35 for the whole CSIC, and for the Area of Materials Science and Technology is 0.98. As it is less than 1, it is great news, since it means there is no glass ceiling in this area. However, in all the other areas is higher than 1, and in the area of Natural Resources it is even higher than 2, indicating a greater gender imbalance in the highest positions in that case.

Elena Torrecilla (ICM) gave an overview of some of the projects on Gender Equality that are being carried out with European Union funds, whereas Esther Garcés and Silvia Donoso (ICM) presented the European project LeTSGEPs, and described how ICM understands the articulation of the center’s Equality Plans within CSIC's Equality Plan.

Sílvia Donoso, during her presentation, highlighting the added value of having Gender Equality Plans.
The second part of the meeting began with the socialization of routes, work experiences and articulation in networks by the Equality Committies of different CSIC centers. This include experiences of Sara Soto (ICM), Rosa Fernández (IBE-CSIC), Elena Gómez (IPBLN-CSIC), Cristina Carnerero (IDAEA-CSIC), Silvia Gallego (ICMM-CSIC), Anna May (ICMAB-CSIC) and Josefa Masegosa (IAA-CSIC). The ICMM-CSIC and ICMAB-CSIC have also shared what it has meant to obtain the CSIC Equality Distinction.

Next, with the aim of advancing in the configuration of the Network of Equality Commissions of the CSIC centers, discussion groups were organized to specify articulation mechanisms between the Committees, but also between the CSIC Equality Plan and the Equality Plans that are being developed in the different centers.

Within the discussion groups, a great diversity of routes by the different Equality Committees was evidenced concerning their training, budget and actions. Among the conclusions of the meeting were the need to create equality committees per center, as well as to create community and give visibility to the committees already created.

Likewise, attendees requested support from the Network of Equality Committees to share knowledge, good practices and to advance in the implementation of gender measures. Finally, training and qualification -at different levels- of personnel and the recognition of equality training as merit have been considered key.

The meeting closed with the commitment to continue taking firm steps towards the institutionalization of effective gender equality in the centers of the CSIC and for this, an agenda of actions is drawn up for the Network under the leadership of the Equality Committee of the CSIC.

Cover Figure: Percentage of women and men researchers (tenured researchers, research scientists and research professors) between 2001 and 2019 (Annual Report 2020 of the Women and Science Committee, CMyC).