As we already announced on July 2017, Mariona Coll, researcher at the Institute of Materials Science (ICMAB) in the SUMAN group, has been awarded with the Research Award L'Oréal-Unesco "For Women in Science" 2017. The awards ceremony took place this last Wednesday, 22 November, in Madrid. Mariona will receive 15.000 € that will be invested in her research project which "can contribute to one of the most important challenges of this century: find a new energy system for the production of clean energy".

Mariona Coll, and her research project on the development of new materials for the conversion of solar energy, carried out at ICMAB, has been awarded with one of the five Research Awards L'Oréal-Unesco "For Women in Science". Mariona studied Chemistry at the Universitat de Barcelona (UB) and did her PhD in Chemistry at the Universitat Autònoma de Barcelona (UAB) and ICMAB, on the development of superconducting materials. She then was a postdoc in USA (Oak Ridge National Laboratory, National Institute of Standards and Technology, University of Maryland) and in Europe (IFWDresden, University of Hamburg, ICMS-CSIC), before coming back to ICMAB.

The awards ceremony was built upon the question "How can we make that young girls fall in love with STEM?", since the "For Women in Science" program has been for 17 years working on enhancing the visibility of women in science, and this year was specially focused in STEM: its goal is to reach the 50 % women in the STEM university studies (science, technology, engineering and mathematics).

Research Awards For Women in Science 2017:

The full list of this year's Research Awards is the following: 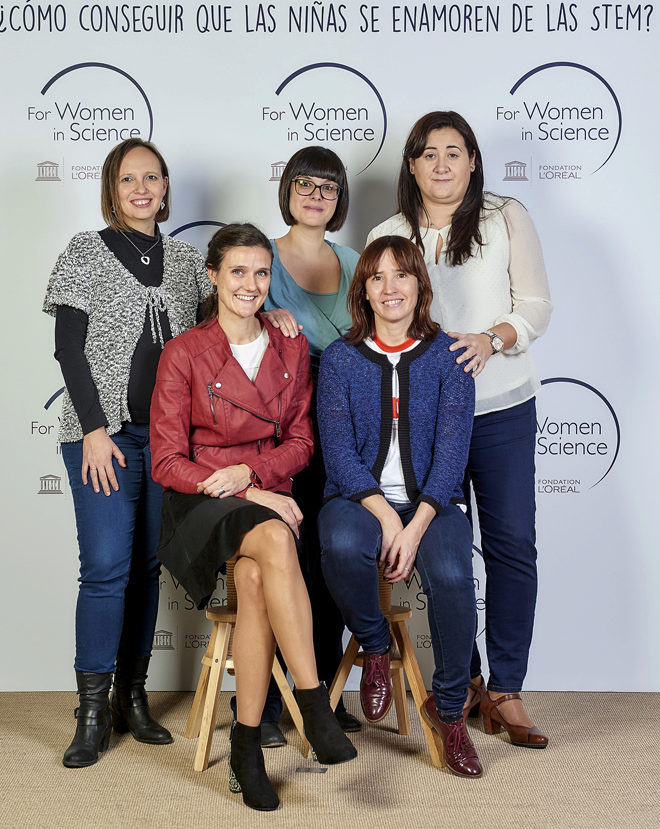 Figure: The five awardees L'Oréal-UNESCO "For Women In Science" 2017