Researchers develop a material that mimics how the brain stores information

UAB researchers have developed a magnetic material capable of imitating the way the brain stores information. The material makes it possible to emulate the synapses of neurons and mimic, for the first time, the learning that occurs during deep sleep. ICMAB researcher Alberto Quintana participates in the study.

Image from Gerd Altmann in Pixabay

Neuromorphic computing is a new computing paradigm in which the behavior of the brain is emulated by mimicking the main synaptic functions of neurons. Among these functions is neuronal plasticity: the ability to store information or forget it depending on the duration and repetition of the electrical impulses that stimulate neurons, a plasticity that would be linked to learning and memory.

Among the materials that mimic neuron synapses, memresistive materials, ferroelectrics, phase change memory materials, topological insulators and, more recently, magneto-ionic materials stand out. In the latter, changes in the magnetic properties are induced by the displacement of ions within the material caused by the application of an electric field. In these materials it is well known how the magnetism is modulated when applying the electric field, but the evolution of magnetic properties when voltage is stopped (that is, the evolution after the stimulus) is difficult to control. This makes it complicated to emulate some brain-inspired functions, such as maintaining the efficiency of learning that takes place even while the brain is in a state of deep sleep (i.e., without external stimulation).

This study, led by researchers from the UAB Department of Physics Jordi Sort and Enric Menéndez, in collaboration with the ALBA Synchrotron, the Catalan Institute of Nanoscience and Nanotechnology (ICN2) and the Institute of Materials Science of Barcelona (ICMAB, CSIC), proposes a new way of controlling the evolution of magnetization both in the stimulated and in the post-stimulus states.

The researchers have developed a material based on a thin layer of cobalt mononitride (CoN) where, by applying an electric field, the accumulation of N ions at the interface between the layer and a liquid electrolyte in which the layer has been placed can be controlled. "The new material works with the movement of ions controlled by electrical voltage, in a manner analogous to our brain, and at speeds similar to those produced in neurons, of the order of milliseconds," explain ICREA research professor Jordi Sort and Serra Húnter Tenure-track Professor Enric Menéndez. "We have developed an artificial synapse that in the future may be the basis of a new computing paradigm, alternative to the one used by current computers", Sort and Menéndez point out.

By applying voltage pulses, it has been possible to emulate, in a controlled way, processes such as memory, information processing, information retrieval and, for the first time, the controlled updating of information without applied voltage. This control has been achieved by modifying the thickness of the cobalt mononitride layers (which determines the speed of the ions motion), and the frequency of the pulses. The arrangement of the material allows the magnetoionic properties to be controlled not only when the voltage is applied but also, for the first time, when the voltage is removed. Once the external voltage stimulus disappears, the magnetization of the system can be reduced or increased, depending on the thickness of the material and the protocol how the voltage has been previously applied. 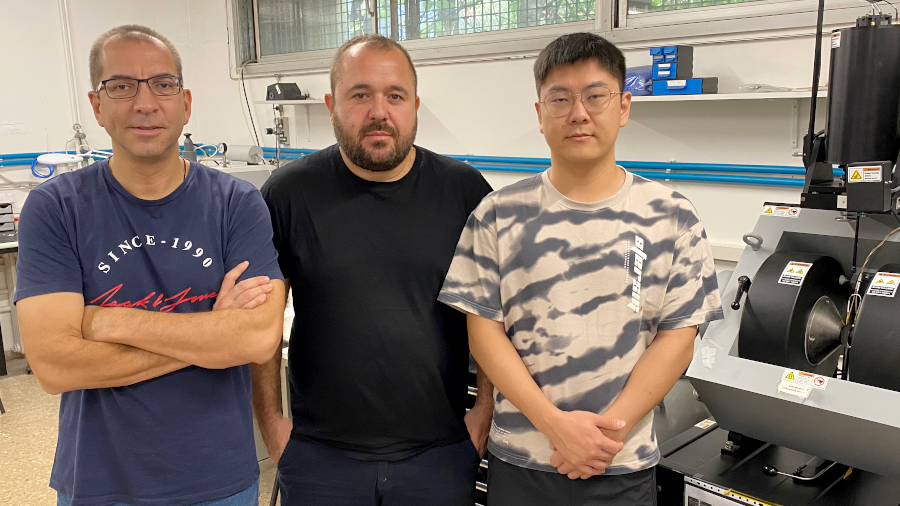 Researchers (left to right) Jordi Sort, Enric Menéndez and Zhengwei Tan in the lab at the UAB. | UAB

This new effect opens a whole range of opportunities for new neuromorphic computing functions. It offers a new logic function that allows, for example, the possibility of mimicking the neural learning that occurs after brain stimulation, when we sleep profoundly. This functionality cannot be emulated by any other type of existing neuromorphic materials.

"When the thickness of the cobalt mononitride layer is below 50 nanometers and with a voltage applied at a frequency greater than 100 cycles per second, we have managed to emulate an additional logic function: once the voltage is applied, the device can be programmed to learn or to forget, without the need for any additional input of energy, mimicking the synaptic functions that take place in the brain during deep sleep, when information processing can continue without applying any external signal", highlight Jordi Sort and Enric Menendez.

The research, published in Materials Horizons, has been led by researchers from the UAB Department of Physics Jordi Sort, also a researcher at the Catalan Institute for Research and Advanced Studies (ICREA), and Enric Menéndez (Serra Húnter Tenure-track Professor). and with the participation of Zhengwei Tan, Julius de Rojas and Sofia Martins, researchers from the UAB Department of Physics; Aitor Lopeandia, from the Physics Department of the UAB and the Catalan Institute of Nanoscience and Nanotechnology (ICN2); Alberto Quintana, from the Institute of Materials Science of Barcelona (ICMAB-CSIC); Javier Herrero-Martín, from the ALBA Synchrotron; José L. Costa-Krämer, from the Institute of Micro and Nanotechnology (IMN-CNM-CSIC); and researchers from CNR-SPIN in Italy, and from IMEC and Quantum Solid State Physics (KU Leuven) in Belgium.