The ICMAB participates in the EU's most ambitious battery research project: BIG-MAP

BIG-MAP is the new EU project with a budget of 20 M€ to accelerate the development of the next generation of super batteries. From the ICMAB, M. Rosa Palacín and Alberto García participate in this exciting project, in the framework of the Battery 2030+ initiative and within the H2020-LC-BAT-2019-2020 Call (Building a Low-Carbon, Climate Resilient Future: Next-Generation Batteries).

Batteries will play a crucial role in the phase-out of fossil fuels, in particular in the transport sector, but if we are to reach the target of 40 % reduction in greenhouse gas emissions (from 1990 levels) before 2030 , as included in the EU 2030 climate and energy framework, we need cheaper and more sustainable alternatives to the existing batteries.

That is a big challenge, because the development of new batteries takes a long time - longer than we can wait for the green transition. A new EU project, BIG-MAP (Battery Interface Genome - Materials Acceleration Platform), aims at accelerating the speed of battery development by changing the way we invent batteries, so that future sustainable and ultra-high-performance batteries can be developed 10 times faster than today.

BIG-MAP is a central part of the large-scale and long-term European research initiative on batteries, BATTERY2030+, and it involves 34 partners from 15 countries, including world-leading academic experts, research laboratories and industry leaders. BIG-MAP is the EU's most expensive single research project on developing sustainable batteries for the future: the budget for the project is 20 M€.

The vision is not only to be able to develop new batteries much faster, but also to ensure that they can store energy extremely efficiently, can be produced sustainably and at such a low cost that in the future it will be profitable to store electricity from, for example solar and wind in batteries. This however requires fundamentally new materials and rapid progress within battery technologies, which we may not even have heard of yet.

“In BATTERY 2030+ and BIG-MAP, We have to 'reinvent' the way we invent batteries. Last year the Nobel Prize in chemistry went to the inventors of the Li-ion battery. A fantastic invention, but it took 20 years from idea to product - we need to be able to do it in a tenth of that time if we are to have sustainable batteries ready for the green transition,” says Tejs Vegge, professor at DTU Energy (Technical University of Denmark) and coordinator of BIG- MAP.

Inventing how to invent

“You can say that the project is not about inventing a new battery, but a new way of inventing new batteries - which we will also use to invent new batteries,” Tejs Vegge explains and continues “We need to develop a whole new scientific platform and a new common 'battery language', which allows artificial intelligence to be used to obtain, analyze and exploit data from all parts of the research and development value chain at the same time - with minimum human interference and without being bound by traditional development processes."

Using machine-learning algorithms coupled with physical models and data it will - for example- be possible to predict the durability of a new battery in a fraction of the time it has taken so far. This can be done through large-scale computer simulations, experiments and tests that are continuously evaluated without human intervention.

“When the batteries no longer need to be charged and discharged many times to find out how they respond to a given pattern of consumption, and when researchers do not need to spend time or be available in all parts of the process, we can do it much faster, ”says Tejs Vegge.

BIG-MAP researchers have to collaborate across borders and continents using laboratories spread over large distances and time zones. Under these circumstances, coordination of testing and distribution of data, materials, etc. will typically be a time-waster, but that will not be the case with BIG-MAP, Tejs Vegge explains:

“We are developing a whole new infrastructure around the project, which means that the development work will take place, as if it was in one laboratory that never closes. We are going to share data just as fast as we get it and physical access to test facilities will no longer matter."

The project will initially run over the next three years and is expected to significantly accelerate the speed at which new battery types can be developed. And because the project uses the specific development of batteries to develop the platform and vice versa, it is also quite possible that BIG-MAP researchers will introduce new battery materials in the course of the project’s 3 year period.

ICMAB participation in the BIG-MAP project

The ICMAB interest for the BIG-MAP project is to contribute to the integration of fundamental research in the industrial value chain for new battery technologies and contribute to standardization and experimental validation of data/trends.

The ICMAB participates with modelling related tasks, which will be led by Alberto Garcia, and experimental research related to new battery chemistries, led by M.Rosa Palacin. We will also have a significant role in the tasks related to exploitation and outreach, which we will coordinate (M. Rosa Palacín is the "Dissemination and Exploitation Manager" of the project).

Other researchers involved in the project are Alexandre Ponrouch and Carlos Frontera. 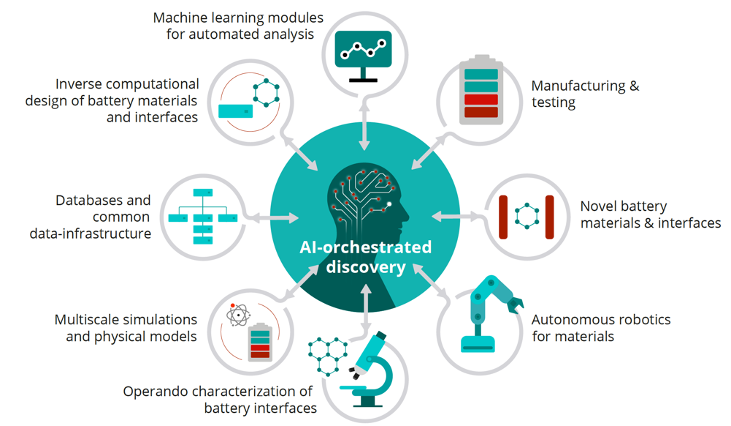