Two ICMAB reserachers from the NN group have been granted LLAVOR projects to develop novel electromagnetic wireless power transfer technologies in medical devices, and to see the effect of millimeter waves on the reverse-magnetization of ε-Fe2O3 films.

The "Knowledge Industry Grants, Modality A: LLAVOR" are devoted to innovative projects with the potential to be incorporated into the productive sector and are awarded by the Department of Research and Universities (Generalitat de Catalunya) - Agency for Management of University and Research Grants (AGAUR).

Pablo Guardia, from the Nanoparticles and Nanocomposites (NN) group, ICMAB, CSIC
"ChargeTheM project aims to develop a novel Electromagnetic Wireless Power Transfer (EM WPT) technology for implantable medical devices (IMDs)" explains Pablo Guardia. "Current Electromagnetic (EM) Wireless Power Transfer (WPT) technologies allow for charging solutions but with strong limitations as high frequency EM radiations are required. In addition, transmitter and receiver coils have to be large and perfectly aligned for an efficient WPT. Such limitations are not compatible at all with the working conditions of most IMDs."
The lifespan of the encapsulated devices such as  implantable medical devices (IMDs) is directly related to the battery or supercapacitor capacity, leading to a trade-off between size and lifetime. This severely compromises the design and miniaturization of new IMDs such as pacemakers. As such IMDs are replace only due to battery depletion which is associated with high costs as well as risk for the patient. ChargeTheM project aims to explore a novel  Electromagnetic Wireless Power Transfer (EM WPT) technology beyond the state-of-the-art combining magnetic and thermoelectric materials. In particular, ChargeTheM will combine state-of-the-art nanocrystals to design multifunctional nanocomposites. The latter to be used to recharge batteries in encapsulated devices.
Compared to the current EM WPT technologies, ChargeTheM will provide power transfer through small reviving systems and under low-frequency EM fields. This clearly will overcome the current limitations of EM WPT while allowing the development of novel micron size encapsulated IMDs. 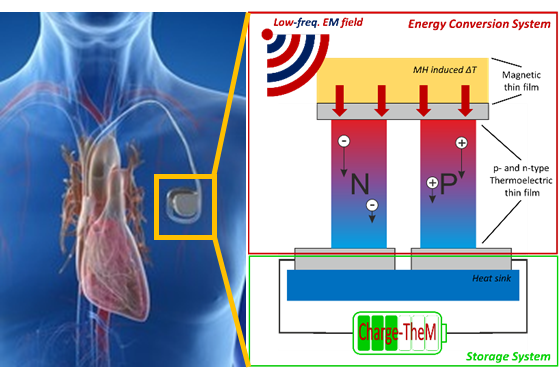 Scheme of the Charge TheM project | Pablo Guardia

"The aim is to show that when millimeter waves are applied to ε-Fe2O3 films the magnetic field needed to reverse its magnetization is significantly lower than without mm-waves." says Martí Gich. "The challenge is preparing films displaying ferromagnetic resonances (FMR) at the frequencies that are experimentally available to us. In this case to show the proof of concept we are focusing on the 50 GHz range instead of in the 180 GHz region where we find the FMR of ε-Fe2O3 (in the field of radiofrequency the prices and the challenges increase with the frequency). So we will have to prepare films with metal substitutions to lower the FMR. Another technical challenge is being able to locally “read” the film magnetization state while mm-waves are applied to it. Some ideas to do this are using the inverse Hall effect or magnetoptics."

Improving the energy efficiency of computers is mandatory for making sustainable the exponential rise of data processing and storage. A critical step to confront this challenge is developing novel, fast, low-dissipative and ultrahigh density magnetic recording media.  The project aims at providing a proof of concept for εε-Fe2O3-based ferrites as a novel system to implement ultrahigh density recording media. In particular, we will evaluate if applying millimeter-waves or sub-THz pulses can significantly reduce the magnetic fields needed to switch the ferrite film magnetization, decreasing the energetic consumption of information writing operations. The improved switching efficiency relies on the excitation resonant modes by pulses of these frequencies transmitted through coplanar waveguides, which will be used to assist the local switching of magnetization by small bias fields.

The proposed solution is an oxide-based alternative to state-of the art ultrahigh density recording media based on FePt alloys. The demonstration of a new approach to the assisted switching and the introduction of ferrites can greatly enhance the performance of this recording technology, in terms of switching time, power consumption and packing density. The project results could be important in the long term for novel computer architectures the integrating non-volatile memories in all-oxide spintronic or magnonic computing devices. Thus, its potential impact in information technologies is huge.