With great sadness we share the news of the death of Prof. Albert Figueras

On April 3, 2020, an extraordinarily determined, active and kindperson, and a great friend, Prof. Albert Figueras, passed away. He left a deep mark on institutions such as ICMAB and ICN2.

After his thesis he was a professor at the University of Barcelona and did research at the CID-CSIC Institute in Barcelona, ​​where he worked in Josep Rivera’s group on mass spectrometry studies. In the early 1990s, he obtained a position as a Tenured Scientist at the CSIC at the Institute of Materials Science of Barcelona (ICMAB), a center to which he was linked for much of his scientific career, and where he successively became Scientific Researcher and Research Professor. Together with Rafael Rodríguez Clemente, he created the ICMAB Crystalline Growth Laboratory.

Albert Figueras was an expert in crystalline growth and characterization problems, in inorganic materials, such as oxides or silicon carbide, and also in molecular materials. For more than ten years he led the CVD (chemical vapor deposition) group, of which he was an internationally recognized expert. He obtained numerous national and international projects, was the author of many scientific papers and was responsible for numerous doctoral theses.

Not only was he an excellent scientist in the laboratory, but he also devoted part of his effort to the organization of research. First in the CSIC Delegation at the European Union, then as co-director of the Nanoscience and Nanotechnology Research Center (CIN2), and finally, and until a few days ago, in the Marine Technology Unit.

Together with Prof. Jordi Pascual (then director of the ICN), and as co-director of CIN2, he contributed decisively to shaping the current Catalan Institute of Nanoscience and Nanotechnology Foundation (ICN2), selecting and supporting research lines and many of the researchers who now lead the groups of the Institute, and decisively modeling the current participation of the CSIC in the ICN2 Foundation.

It will be difficult for us to get used to not seeing him among us. He was always an extraordinarily determined, active and kind person, far from all divineness, and a great friend. 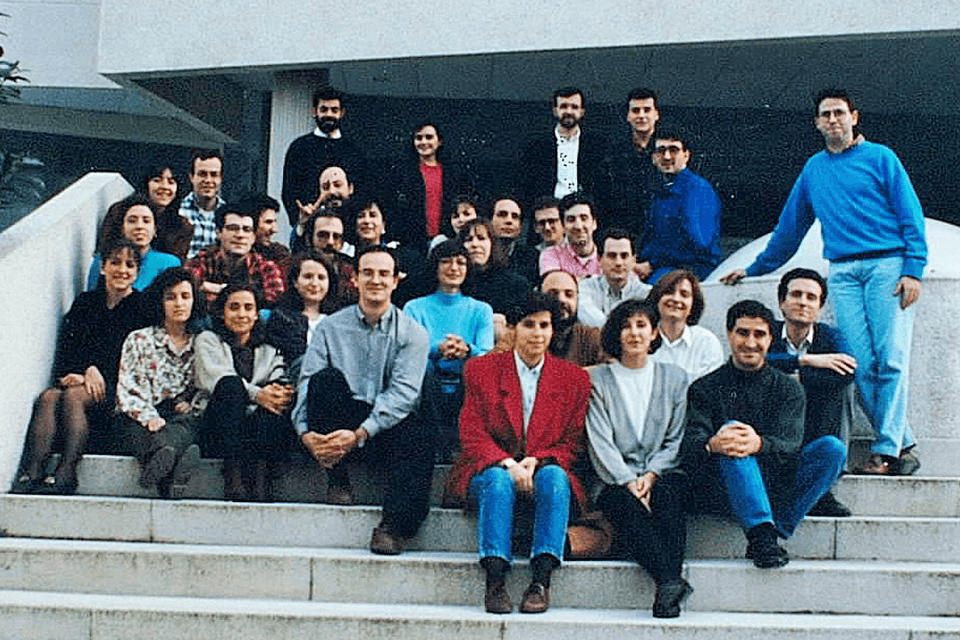 Figure: Group photo of the ICMAB members during the first years of the Insitute. Albert Figueras is in the second row, wearing a brown sweater.