Development of a radiolabeled nanomaterial to improve current theranostics for cancer

Researchers Rosario Nuñez and Gerard Tobias: “The therapeutic approach proposed here has the potential to be the basis of a more efficient, less aggressive and less toxic cancer treatment.” 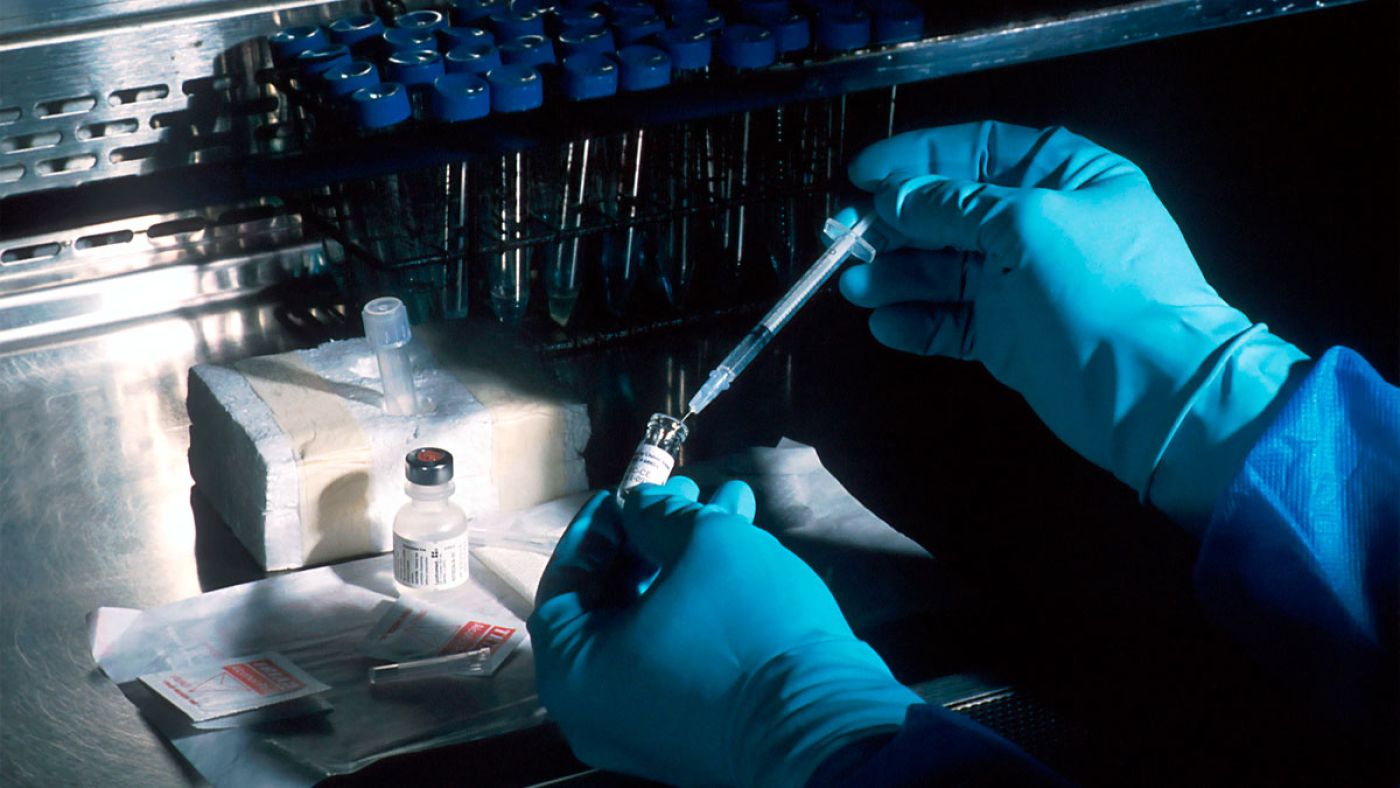 Hands of a scientist, under a sterile hood, preparing a vaccine / National Cancer Institute

Nanomaterials contain a lot of potential when it comes to theranostics, thanks to some physicochemical properties that allow for the incorporation and biodistribution of contrast agents, necessary in the detection and diagnosis of tumoral cells, as well as the integration of a drug cargo that could be used for the treatment of said cells.

The article “Radiolabeled Cobaltabis(dicarbollide) Anion−Graphene Oxide Nanocomposites for In Vivo Bioimaging and Boron Delivery” published in ACS Appl. Nano Mater, which includes the work of ICMAB Researchers Gerard Tobias, from the Solid State Chemistry (SSC) group, Rosario Nuñez, from the Inorganic Materials & Catalysis (LMI) group, who were collaborating in a Frontier Interdisciplinary Project (FIP), as well as Anna Laromaine, from the Nanoparticles & Nanocomposites (NN) group, introduces a new nanomaterial based on graphene oxide functionalized with radiolabeled high boron content COSAN clusters (GO-I-COSAN). It is a promising tool for theranostics with many appealing properties, thanks in part to the nanoparticle chosen as a carrier.

“One of the most featured advantages of graphene oxide is its rich surface chemistry. Thus, the presence of a wide variety of functionalities allows addressing different synthetic approaches that can involve not only the formation of covalent bonds, but also the possibility of creating non-covalent interaction with the potential cargo. Graphene oxide has excellent properties in terms of loading capacity, multifunctionalization and potential for combined therapies. It has also been reported that graphene oxide surface can improve the therapeutic effect of drugs. Hence, in our opinion this is a nanoplatform worth to explore”, says ICMAB Researcher Gerard Tobias.

The graphene oxide is functionalized with COSAN, a highly versatile anionic boron cluster that has many interesting unique properties like low charge density, hydrophobicity, exceptional stability, an amphiphilic molecular architecture and high biocompatibility. ICMAB Researcher Rosario Nuñez explains why this cluster is appealing for applications in Boron Neutron Capture Therapy (BNCT), the non-invasive therapeutic technique based on the use of neutrons for the generation of energetic alpha particles to destroy tumour cells:

“Some studies have shown that COSAN is able to specifically bind to biomolecules. Other studies have demonstrated that COSAN derivatives have an outstanding ability to spontaneously cross the lipid bilayer cell membrane and accumulate within different type of living cells. In addition, its elevate boron content (18 B atoms) makes COSAN and its derivatives considered as a source of boron for BNCT treatment of cancer tumors.”

In the formation of this new nanomaterial, the COSAN is radiolabeled with a suitable radionuclide (124I) that allows for the in vivo visualization of the nanocomposite through Positron Emission Tomography (PET), an imaging technique that uses radioactive substances to visualize and measure changes.

Figure 1. (a) TEM image of GO-I-COSAN. (b) SAED pattern with the corresponding line intensity profile. (c) HRTEM images of GO-I-COSAN.

A key aspect of any material to be used in nanomedicine is its toxicity, which has been tested in depth through several methods. In vitro studies show low cytotoxicity, opening the doors for in vivo testing. Anna Laromaine explains why they used Caenorhabditis elegans to elaborate the first in vivo tests:

“Remarkably, bioinformatics analyses indicate that 60 % of the worm’s genes are homologous to the humans, and the transport’s mechanisms of biomolecules through biological barriers are also highly conserved. The possibility to use multiple animals and replicates for each experiment increases the robustness of the in vivo data and confers a remarkable potential to this animal model. […] We used this small worm to evaluate the Cobaltabis(dicarbollide) Anion−Graphene Oxide nanocomposites in vivo, which allowed us to confirm the low toxicity of those materials using a large number of animals, and the visualization of the ingested material within the body of the worm, thanks to its transparency.”

The PET capabilities achieved with the incorporation of radiolabeling allowed to also test the GO-I-COSAN in mice, showing great stability and a favorable biodistribution, with a long residence time on blood and progressive elimination via the gastrointestinal tract. All these results indicate the nanomaterial is not cytotoxic and is accumulated in living cells.

This study shows promising results, stablishing GO-I-COSAN as a non-cytotoxic nanomaterial that has interesting properties to be used for BNCT, PET imaging techniques, and as a carrier for drugs. Rosario Nuñez and Gerard Tobias already have plans to further develop this technology:

“In the near future we will try to perform the boron quantification and imaging of boron distribution in cells incubated with our nanomaterial by neutron autoradiography. After, BNCT in vitro assays will be performed by neutron irradiation to study the neutron response with boron administration. Finally, some tumor-bearing animals will be irradiated after boron administration using a well-stablished neutron reactor infrastructure. For this part of the research, more funding is necessary and also expert collaborating groups that have these special facilities.”