The SENSORAÏM project, framed in the field of precision agriculture, started in July 2019 and now has come to an end. Here we present its major achievements.

Visual concept of the SENSORAÏM project | Image by Gus Regalado.

The concept of the project relies on a network of autonomous dataloggers spread in the vineyard, each one including sensors, and control and power units. These dataloggers monitor the conditions of the field (such as temperature or humidity) and transmit the information to a centralized gateway, and from there to the smartphone of the viticulturist. 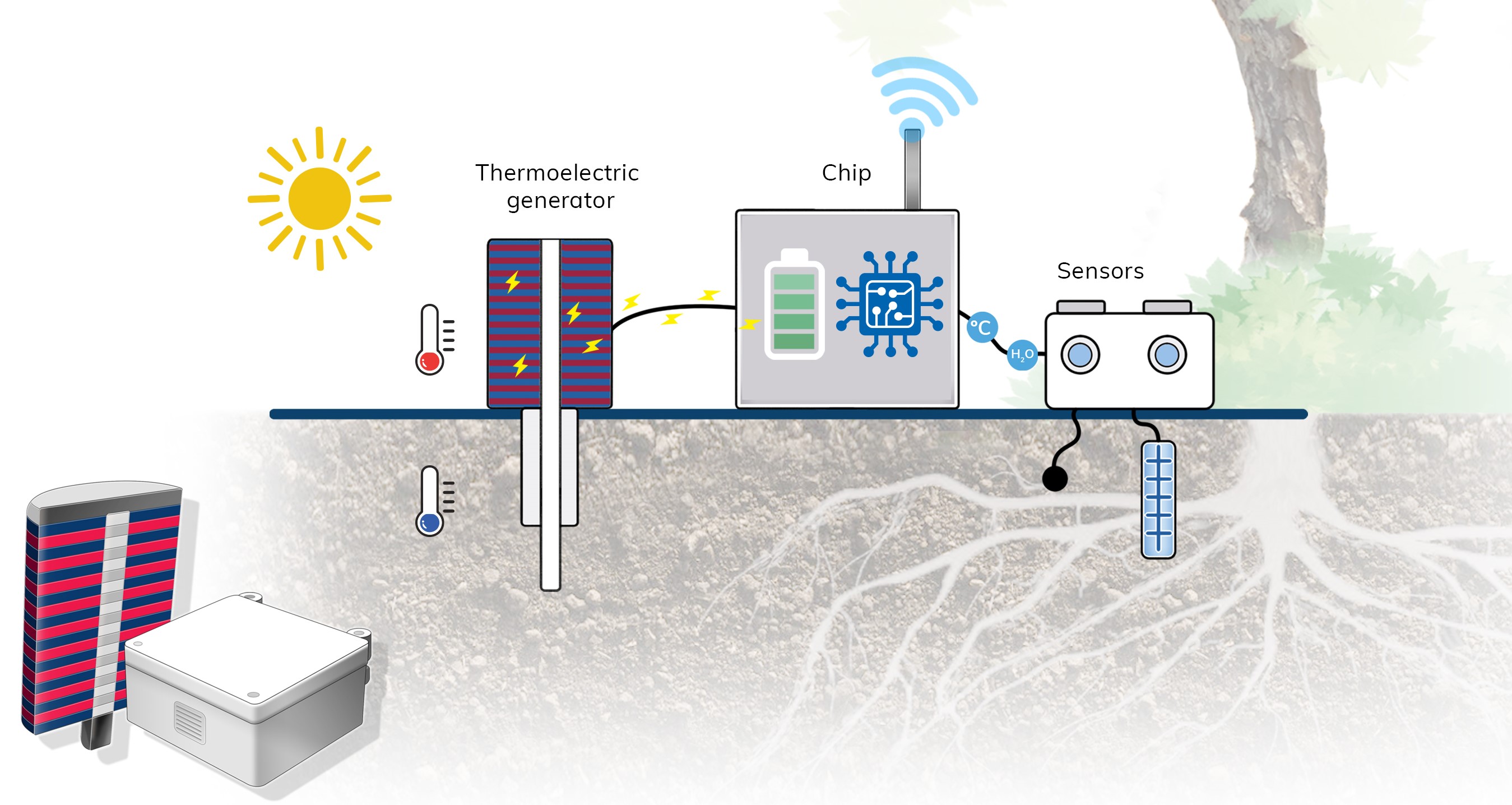 Model of the datalogger prototype and its parts: thermoelectric generator (power unit), chip (control and telecommunications unit) and sensors. | Image by Gus Regalado.

"The main breakthrough of the SENSORAÏM project is that these dataloggers are conceived to be autonomous by harvesting the local renewable energy through organic thermoelectric generators" says Mariano Campoy-Quiles, ICMAB researcher and leader of the project. "The project has managed to develop proof of concept devices to this end" he adds.

As a benchmark, the first thermoelectric generators were tested using commercial inorganic modules of different geometries under solar simulators and external heat sources. However, the goal of the SENSORAÏM project was to use organic (non-commercial) thermoelectric generators for this application. To this end, extensive modeling and optimization for the organic generators was performed and several proof of concept organic modules were manufactured and characterized.

To be able to use organic thermoelectric generators, it was important to reduce the power consumption of the dataloggers as much as possible. Researchers have managed to achieve a 95 % reduction of power consumption in the last prototypes tested with respect to the first ones.

Moreover, researchers have tested the datalogger prototypes in outdoor conditions. A network of three dataloggers was used to monitor a field in different conditions of soil humidity and shadowing. The locally measured humidity and temperature were transmitted using radiofrequency to a central control computer in the lab. 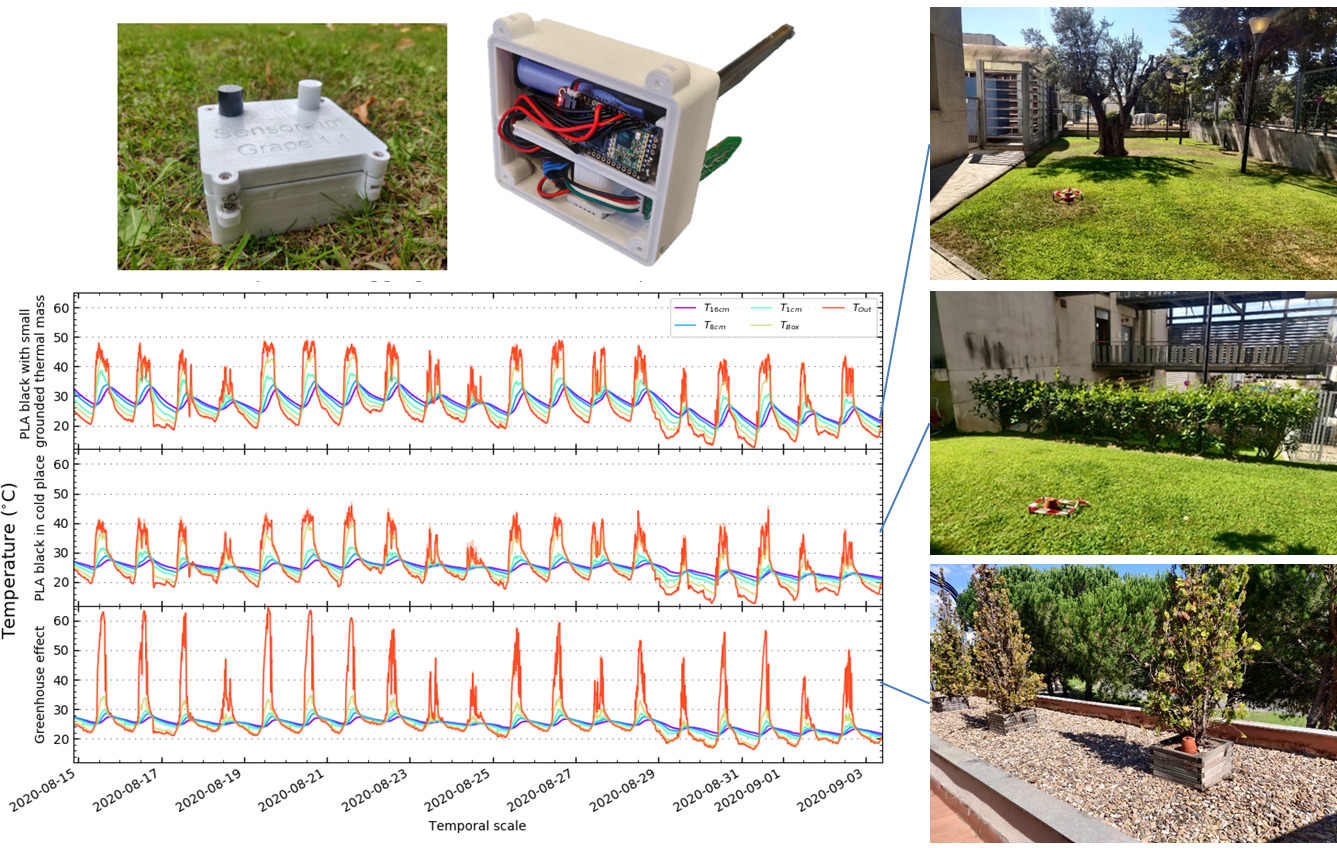 Prototypes of the dataloggers and examples of the temperature studies in three different spots.

An important aspect of the project, especially for its transference from the lab to the market, is that the research team has cooperated and been in contact with local winegrowers and other stakeholders to define the real needs for precision viticulture, and has made sure that the IoT network and devices they envision can satisfy them.

The SENSORAÏM project will be succeeded now by the even more ambitious project ORGEVINE, recently granted under the ERC Proof of Concept H2020 European program, and which aims at significantly increase the generated power of the organic thermoelectric module, so it can meet the needs of the different sensors and dataloggers for this application in vineyards.

The project was led by ICMAB researcher Mariano Campoy-Quiles, from the Nanostructured Materials for Optoelectronics and Energy Generation (NANOPTO) group at ICMAB-CSIC, and developed by Iván Álvarez, Bernhard Dörling and Andrés Gómez.

SENSORAÏM was funded by the European Regional Development Fund (FEDER) of the European Union, in the framework of the Operative Programme FEDER of Catalunya 2014-2020, by Agència de Gestió d'Ajuts Universitaris i de Recerca (AGAUR) and Secretaria d’Universitats i Recerca del Departament d'Empresa i Coneixement de la Generalitat de Catalunya. The project counted with the support from the Knowledge Transfer and the Communication Units of ICMAB.