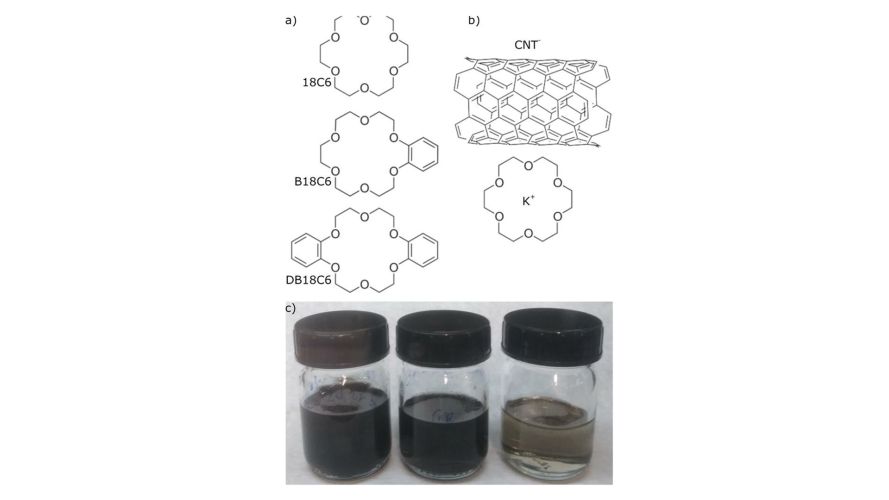 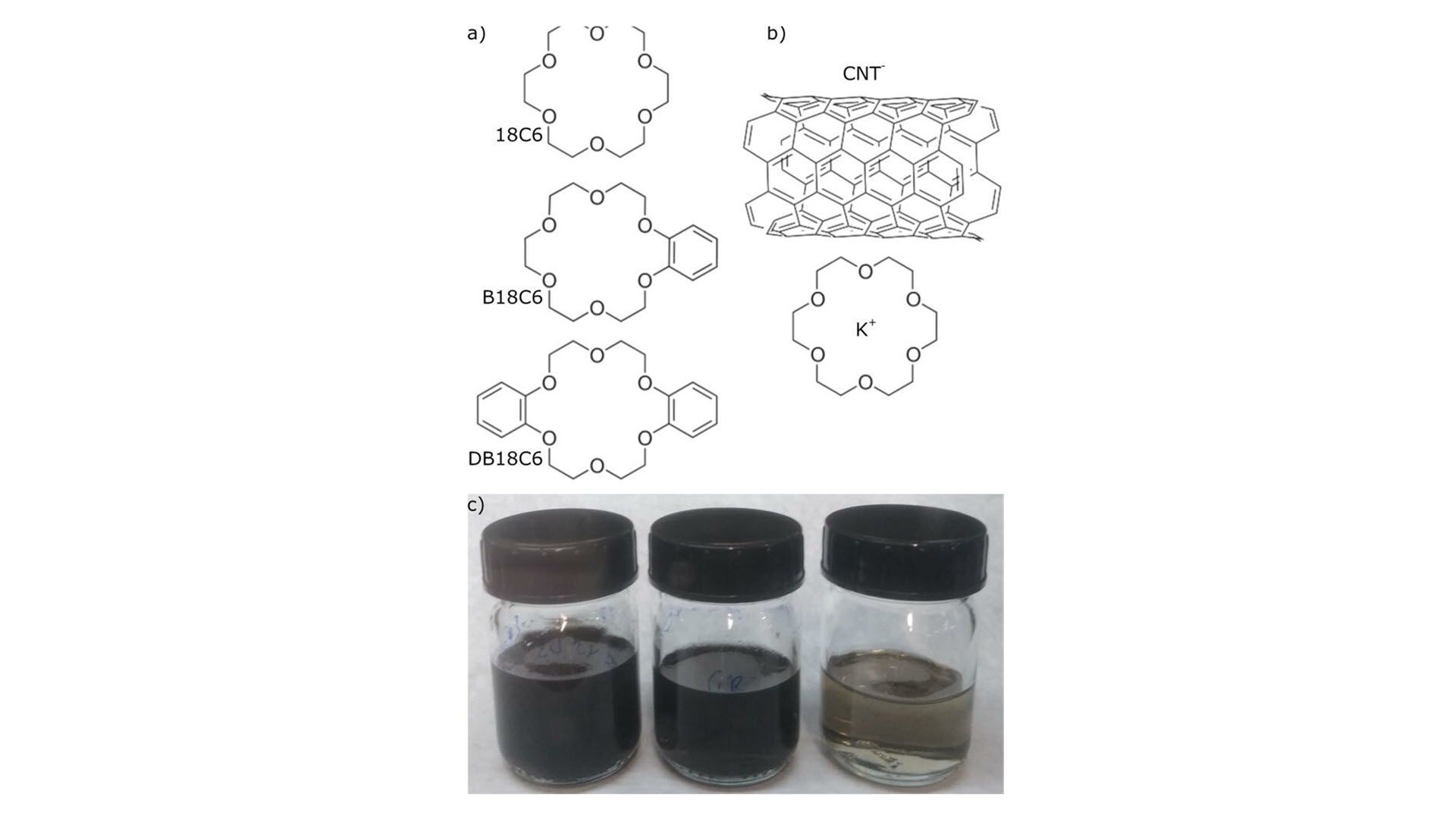 08 October 2021
We present a method to dissolve carbon nanotubes that simultaneously allows to prepare n-doped films. These films are composed of thinner bundles of longer tubes when compared to films prepared using surfactants and sonication.
Their negative Seebeck coefficient and high electrical conductivity make them good candidates for thermoelectric applications. We investigate their stability in air by aging them at elevated temperatures, showing stabilities over 500 h, which is further improved by the use of crown ethers. Finally, we demonstrate the usefulness of the prepared materials by fabricating an organic thermoelectric generator comprising 40 legs.
Carbon nanotubes (CNTs) are a promising thermoelectric material1 due to their large electrical conductivity, and in the case of precisely doped semiconducting single-walled CNTs (SWCNTs), their potentially high Seebeck coefficient.2,3 While there are many encouraging reports of p-type doped CNTs and other organic materials, n-type materials still lag behind,4,5 particularly when considering their inferior stability.6 Polyethyleneimine (PEI) has been used as an easy to process and effective n-type dopant for a long time.7 Reports regarding its air-stability varied widely in the past, while nowadays it is accepted that some kind of barrier layer is required for prolonged air-stable operation.8,9 Another more recent class of n-type dopant used for CNT thermoelectrics are crown-ether complexes of alkali metals. Doped mixtures of semiconducting and metallic tubes have shown good stability, which seemed to further improve with increasing CNT diameter.5 However, somewhat disappointingly, the electrical conductivity of thin films of semiconducting SWCNTs with a diameter of less than 1.7 nm n-doped in this way was found to be unstable, degrading within minutes upon exposure to air,6 which warrants further investigation.
In the same work, it was found that maximum doped electrical conductivity of CNT films correlates with a higher maximum power factor at optimum doping level.6 This means that any (semiconducting) CNT raw material that is known to have an intrinsically high electrical conductivity could potentially also show a high power factor, if doped optimally.
Besides a high-quality raw material, and doping, there are other ways to further increase the electrical conductivity of CNTs. For example, decreasing the bundle-size in random carbon nanotube networks has been shown to increase the electrical conductivity in general,10–12 and the thermoelectric power factor in particular.6,13 Similarly, increased CNT length has been shown to result in an increased electrical conductivity.14
Here we report on a method that tries to combine several advantages into a unified approach. It allows to prepare n-doped films composed of smaller bundles of longer CNTs, when compared to other approaches.
The method joins two approaches: the n-type doping of buckypapers for thermoelectric applications using alkali metal-crown ether complexes as introduced by Nonoguchi et al.,5 and the processing of CNTs from real solutions, again, using alkali metals,15–17 or their crown ether complexes.18–20 In the literature, the latter may be referred to as reduced carbon nanotubes,21 CNT salts,15 CNT polyelectrolytes,16 or carbon nanotubides,20 and interestingly, their thermoelectric properties have not been studied yet.
As raw material, we used enhanced direct injection pyrolytic synthesis (eDIPS) SWCNTs (Meijo Nano Carbon), which are comprised of comparatively long tubes (5 to 15 μm according to the manufacturer). All other materials were obtained from Sigma-Aldrich and used as received. The CNT salts were typically prepared by adding 50 mg (1.28 mmol) metallic potassium and 125 mg (0.975 mmol) naphthalene to 100 ml anhydrous Tetrahydrofuran (THF) in a nitrogen atmosphere, and stirred with a glass-coated stirring bar at room temperature for two hours. The resulting dark green naphthalenide solution contained no apparent solid residue. It was added to 10 mg (0.833 mmol of C) of eDIPS CNTs and further stirred for three days to one week. Then, the product was filtrated and washed with copious amounts of THF, to remove any traces of unreacted green napthalenide.
After drying in vacuum, the CNT salt was then dissolved in dimethyl sulfoxide (DMSO), for a final concentration of http://www.w3.org/1998/Math/MathML" display="inline" overflow="scroll" altimg="eq-00001.gif">" role="presentation" style="display: inline; font-style: normal; font-weight: normal; line-height: normal; font-size: 20px; text-indent: 0px; text-align: left; text-transform: none; letter-spacing: normal; word-spacing: normal; overflow-wrap: normal; white-space: nowrap; float: none; direction: ltr; max-width: none; max-height: none; min-width: 0px; min-height: 0px; border: 0px; padding: 0px; margin: 0px; position: relative;"> of CNTs. Some solutions additionally contained one of the crown ethers sketched in Fig. 1, namely, 18-crown-6 (18C6), benzo-18-crown-6 (B18C6), or dibenzo-18-crown-6 (DB18C6). They are known to sequester potassium ions and were added at a molar ratio of 1 crown ether per 20 carbon atoms. The solid was observed to slowly dissolve, forming a black liquid containing visible aggregates. As solutions were stirred for a further week, they progressively gelled as tubes debundled and dissolved. Solutions were diluted as needed and centrifuged at 6000 rpm for 1 h in sealed tubes outside the glovebox. Inside the glovebox, the solutions were stable for more than 18 months. Yet when directly exposed to air, tubes aggregate within minutes.
Hits: 1319