The project to improve the rechargeability of zinc-air batteries, led by ICMAB researchers from the Solid State Chemistry group, has been featured this week in R+D CSIC news. These batteries have more capacity than the lithium-ion ones, and are made of cheap materials, which are widely available in nature as well as safe. 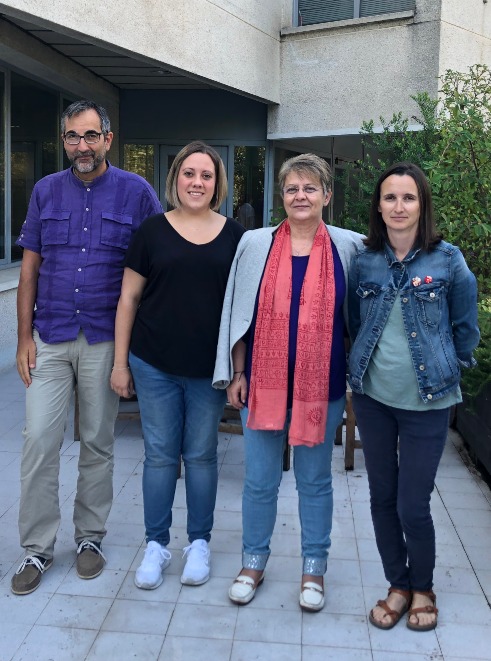 CSIC scientists at the ICMAB and the IMB-CNM are working to achieve an efficient zinc-air battery recharging. These batteries have more capacity than the lithium-ion ones, and are made of cheap materials, which are widely available in nature as well as safe.

Environmental crisis is boosting emerging markets in large-scale electromobility and energy storage for an efficient use of clean energy. These applications require the development of systems with more energy density than current lithium-ion batteries. The latter are the most commonly used rechargeable batteries for both portable devices and electric vehicles. But lithium-ion technology has limitations in terms of energy density, safety, sustainability, as well as a high cost in terms of € per kWh, which makes it an inefficient proposal for large-scale applications.

Rechargeable zinc-air batteries are promising candidates, as they have a good theoretical capacity of 1086 Wh/kg (the power that each kilo of battery can provide), much higher than the 260 Wh/kg capacity of lithium-ion batteries. In addition, they are based on cheap, highly available and safe components. As a matter of fact, oxygen is present in our atmosphere and zinc (Zn) is one of the most abundant elements in the Earth's crust.

However, only non-rechargeable zinc-air batteries have been commercialized until now, since secondary (rechargeable) batteries still collide with several technical obstacles, which are related, above all, to the reversibility and useful life of the electrodes (anode and cathode).

Figure 1: The scientists Dino Tonti, Eulàlia Pujades-Otero, Nieves Casañ Pastor, the three from the ICMAB, and Libertad Abad Muñoz, from the IMB-CNM. | ICMAB

The main technical drawback is the high dissolution of the zinc anode. In the discharge process, the zinc electrode undergoes corrosion and dissolves, and in the charging process it solidifies and generates dendrite growth on its surface, which changes the morphology of the electrode. If the dendrites grow too large, they can come in contact with the cathode and cause a short circuit. They can also cause changes in the morphology of the electrode itself, causing disconnections and electrode passivations, which in the end results in losses in capacity and, consequently, in a decrease of battery life.

"Our group proposes to overcome this problem with a specific coating for the electrode, based on previous electrochemical studies carried out in our laboratories," explains Dino Tonti. "We found that coating the zinc anode with nanoparticles results in a remarkable improvement in the reversibility of this electrode and, consequently, in the useful life of the rechargeable zinc-air battery."

The objective is to work on this technology in order to offer its intellectual property to a relevant industrial agent in the field of batteries, and collaborate in its introduction into a commercial device.

The team recently received funds from the the "Llavor" program of the Generalitat de Catalunya, to progress in their research previously started in a EXPLORA project funded by the Spanish Ministry of Science and Innovation.  The project has the support of CEGASA, a world reference company in the manufacture of zinc-air batteries for industrial uses.

Cover Figure: Environmental crisis is boosting emerging markets in large-scale electromobility and energy storage for an efficient use of clean energy. | Pixabay